SIU receiver serves as big-play threat despite inexperience at position 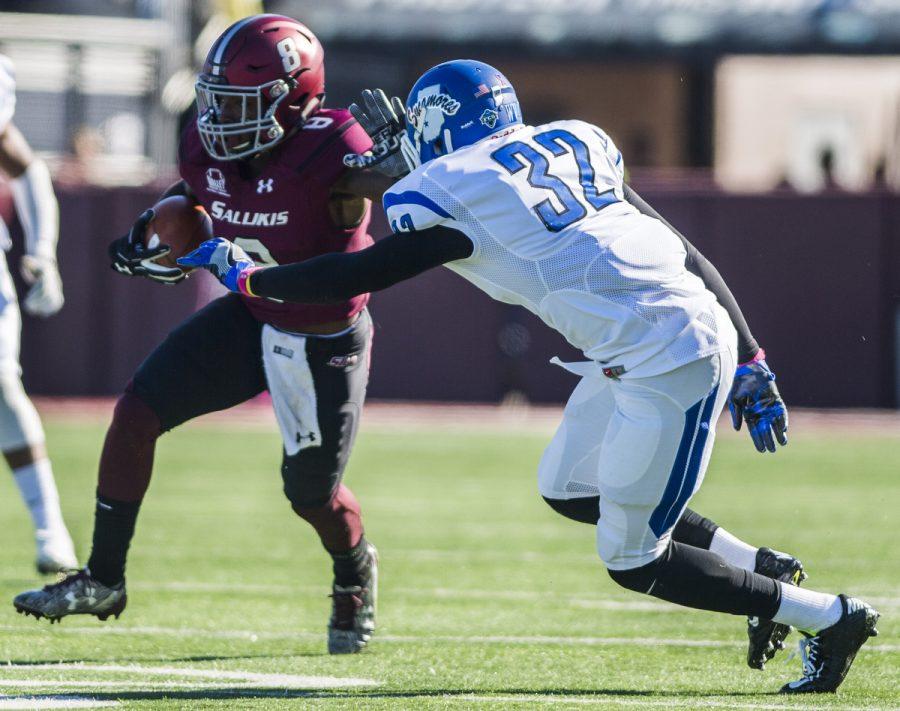 Sophomore wide receiver Darrell James has been one of the Salukis’ best deep threats for the past two years and has continued to show improvement.

But the Fort Worth, Texas, native is still a fairly new product at his current position. The 6-foot receiver originally played running back at R. L. Paschal High School.

“One day after practice [my sophomore year] I was just goofing around and my coach saw me catch a one-handed pass and he asked me, ‘How do I feel about playing receiver?'” James said. “We already had solid running backs so I said ‘Coach, I’ll do what ever you need me to.’ That has been the best decisions I’ve ever made.”

The transition instantly yielded results. As a senior in high school he recorded 97 receptions for 1,413 yards and 14 touchdowns. He was then named to the Fort Worth Star-Telegram’s first-team Super Team.

James experienced his breakout game at SIU last year against Indiana State when he caught six passes for a career-high 119 yards and a touchdown.

In his second year as a Saluki, James has already exceeded last year’s totals. He is averaging 19.12 yards per catch on 20 receptions with 357 yards receiving with two touchdowns — both coming on Oct. 15 against Illinois State.

“That was a great game for me,” he said of his two-touchdown performance. “I had came off of a bad game against [South Dakota State] so having that game was really good to get me back in rhythm.”

Offensive coordinator John Van Dam said James has all the tools to a create tough matchups for opponents on the field.

“His ability to get open on routes is helped by his size and strength,” Van Dam said. “It makes it hard for people to press him and in this conference you see a lot of pressing, so he’s able to have his way.”

Confidence is also important to a wideout’s psyche and James’ teammates said he has a lot of it.

“He talks a lot,” senior receiver Billy Reed said. “Sometimes it gets him into trouble but sometimes it helps him out. He can catch an 80-yard pass from a post route and talk about it for a long time, but then he’ll drop one and still talk like he’s the best receiver ever. That’s the type of mindset you need.”

Reed and James have a good relationship and help each other improve. The senior said he worked out with James a lot in the offseason to improve his skills and even then his personality flows through.

“He’s great with the deep ball as you know,” Reed said. “[We] worked on some of his intermediate routes that he struggled with but he’s definitely improved. He’s a hard worker and somebody you like to be around.”

Van Dam said he projects James to be a big asset for the Salukis the rest of his time here.

“He has a really high ceiling,” Van Dam said. “He just needs to continue getting better and humbling himself and he’ll continue to improve.”