91-year-old Carbondale swimmer an inspiration to all ages (PHOTOS) 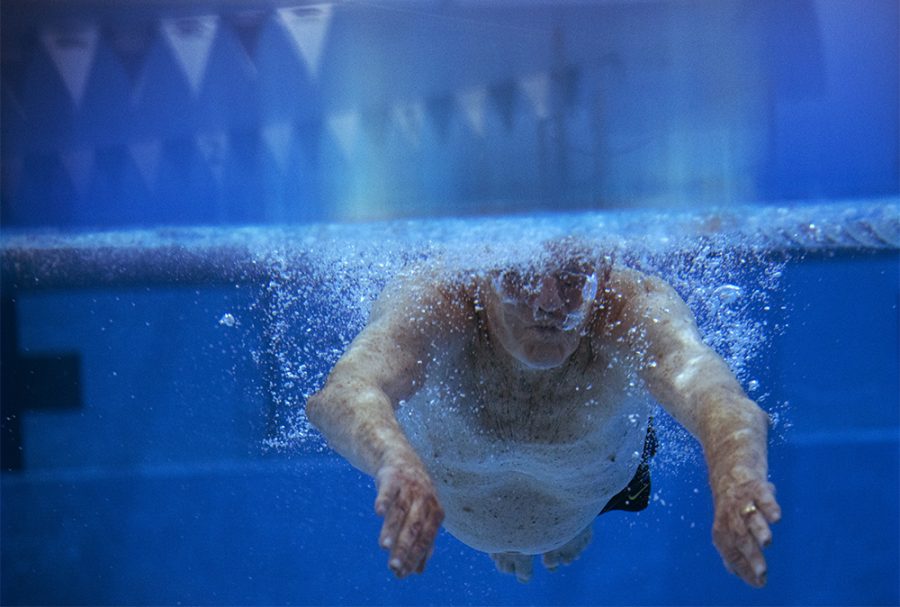 In his 1943 high school yearbook, Tom Maine said his life’s ambition was to become a professional swimmer. Seventy-three years later, at 91 years old, he believes he has finally achieved that goal.

Maine was inducted into the International Masters Swimming Hall of Fame on Sept. 23, reaching what some consider the apex of an adult swimming career.

“It was an honor and quite a surprise,” he said of his induction. “I had no idea it was in order at all.”

Given Maine’s host of athletic achievements, however, his induction is far from surprising. A 19-year member of U.S. Masters Swimming, the national organization for swimmers older than 18, the Carbondale resident has set 27 FINA Masters World Records.

For 20 consecutive years, Maine has been ranked in the U.S. Masters Swimming Top 10.

Maine’s swimming career began in Des Moines, Iowa, where he took swimming lessons at a local YMCA when he was 8 years old. From there, his commitment to swimming earned him a place on the varsity swim team at Roosevelt High School.

As a Navy recruit, Maine continued to swim as a member of the military base swim team in Norman, Okla., and at a naval air station in Corpus Christi, Texas. He served four years as a naval aviator in World War II before he found himself in Iowa State University’s pool as a varsity swimmer once again.

“It’s just kind of relaxing to swim, both mentally and physically,” he said. “You can dream your way around the pool.”

After graduating from Iowa State in 1952, Maine took a 35-year hiatus from swimming, during which time he raised four children and worked for McDonnell Douglas, an aerospace manufacturing corporation. Besides some intermittent recreational swimming, the sport came to a halt in his life, he said.

But his competitive swimming days were far from over. The sport resurfaced in Maine’s life in 1987, when he retired and moved to Carbondale with his new wife, Shirley.

“[Shirley] got me a membership at the Rec Center and I met up with Dr. [Edward] Shea, the notable backstroke swimmer,” Maine said. “Between them, I became interested in competition again.”

He started with the Senior Olympics, and moved on to Masters swimming a decade later. Now, he and his wife leave home at 8 a.m., five days a week, to drive to SIU’s Recreation Center.

Maine spends these weekday mornings in the Edward J. Shea Natatorium pool, concentrating on his strokes and training himself to swim more efficiently. After warming up with some light breaststroke, freestyle and backstroke drills, the 91-year-old works up to swimming full pool-lengths of butterfly, which he calls his “bread and butter” stroke.

And rightly so — seven of Maine’s 13 current world records are in butterfly.

“Tom really sets the bar high,” said Clay Kolar, head coach of the Saluki Masters Swim Club. “It’s a lot of fun to see someone who’s 91 years old still have some fire in their belly for the next competition and want to strive to see what they can do.”

Kolar said Maine’s speed and determination serve as an inspiration to all who visit the pool, young and old.

When he isn’t training, Maine travels nationally and internationally to compete in Masters swimming meets. At every meet, Shirley is right there by his side.

“[Thomas] would like for me to be a swimmer too,” she said. “I don’t know though, I see my job now as to kind of go to the swim meets and keep the records and be with all the other wives out there on the sidelines.”

The pair have been married nearly 30 years.

Like other elderly athletes, Maine’s swimming career has not been without its challenges. The biggest of which, he said, was his hip replacement surgery at the end of 2011.

“Recovering from [the surgery] was sort of like learning to swim all over again,” he said.

As he was starting to get back into shape, Maine broke his leg and was forced to stay out of the pool another six weeks.

“After all that, it’s been a slow reconditioning,” he said.

Friend and fellow Masters swimmer Mary Pohlmann believes it’s Maine’s resilience in the face of such struggles that makes him a role model in the community.

“Tenacity is the virtue that I think most describes Tom,” said Pohlmann, a Carbondale native.

The swimming events he chooses, she said, along with his “doggedness” in returning from illness and surgeries, exemplify that attribute.

As for Maine, he credits swimming with preserving the youthful appearance his friends frequently speak of.

“I think that probably, without swimming, I wouldn’t be here in the shape and condition I am today,” he said.