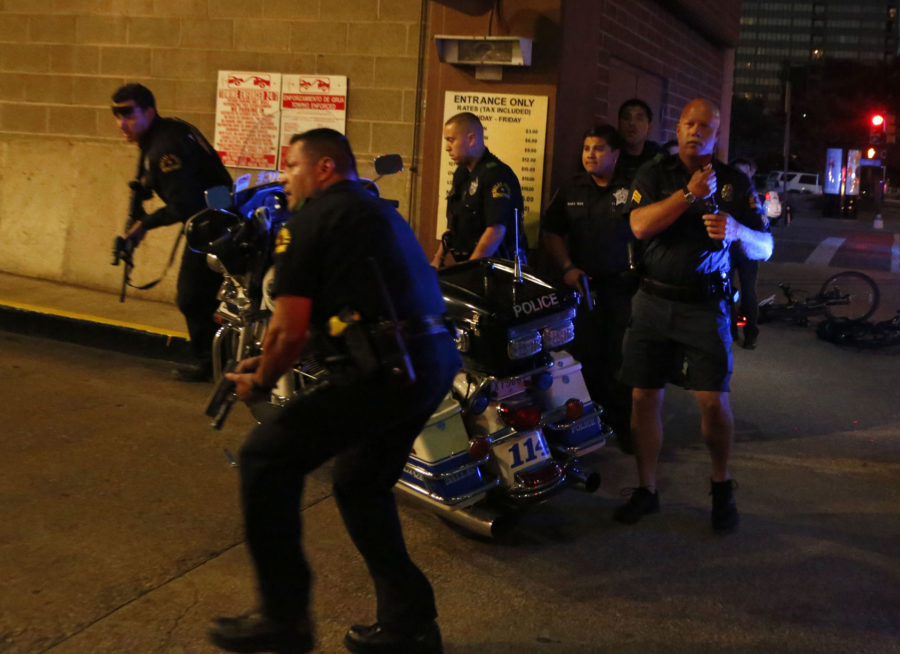 “We cornered one suspect and we tried to negotiate for several hours,” Dallas Police Chief David Brown said during a Friday morning news conference, but “negotiations broke down” and turned into “an exchange of gunfire with the suspect.”

“We saw no other option than to use our bomb robot and place a device on its extension to detonate where the suspect was,” Brown said, adding that, “other options would have exposed our officers to grave danger.”

Brown said reports that the suspect shot himself were incorrect. “The suspect is deceased as a result of detonating the bomb,” he said.

Police believe that the gunman who was killed “did some of the shooting,” but perhaps not all, Brown said, vowing that “if there’s someone out there associated with this, we will find you.”

Brown said a hostage negotiator spoke with the gunman at length before he was killed about 2:30 a.m.. The chief said the attacker said he was upset “with white people” and with recent police shootings. The suspect also said that he was not affiliated with any groups and that he acted alone, Brown said.

“None of that makes sense. None of that is a reason to do harm to anyone,” Brown said, although he would not comment about whether the gunman appeared mentally ill.

Brown said he spoke overnight with the families of officers killed as well as those injured, most of whom have been released from the hospital. He said three officers listed in critical condition are doing better, but that they and the department need the public’s support.

“We’re hurting. Our profession is hurting, Dallas officers are hurting,” he said. “We don’t feel much support most days. Let’s not make today most days.”

Mayor Mike Rawlings said also he met overnight with some families of officers killed and some of the officers hospitalized.

In addition to police, two civilians, a man and a woman, were shot and injured, the mayor said.

“They know the city is grieving with them,” Rawlings said.

Rawlings said that when he met with the wounded officers, he expressed support on behalf of the city and also made them a promise: “We’ll get the bad guys.”

The shooting broke out late Thursday during what had been a peaceful protest against shootings by police officers that claimed the lives of black men in Minneapolis and Baton Rouge, La. About 800 people were marching through downtown, flanked by about 100 police officers, when the gunfire began.

The violence didn’t end until about 2:30 a.m., when police declared an end to the standoff.

It was not immediately clear who the snipers were and whether they were acting on behalf of any organization. Their lethal effectiveness suggested that they were well-trained.

“We’re leaving motive on the table, how this happened and why this happened,” Brown said at a Thursday night news conference.

Officials identified one of the slain officers as Brent Thompson, 43, who had worked for the Dallas Area Rapid Transit Police Department since 2009. He was the department’s first officer to be killed in the line of duty. Three other DART officers were injured but were expected to recover, officials said.

“As you can imagine, our hearts are broken,” the transit district said in a statement. “This is something that touches every part of our organization.”

The other officers who were killed were members of the Dallas Police Department, officials said.

Amanda Mann, a 35-year-old Dallas resident, said she drove downtown with friends shortly before 7 p.m. to catch the beginning of the protest in Belo Garden Park, which she had heard about through Facebook. For the first hour, it felt familiar, much like previous Black Lives Matter protests she’s been to, she said.

“Until 7:45 there were just some speakers, they were positive and proactive, then they said we were going to line up and march,” she said.

Mann said that around 8:30 or 8:45 p.m., as the rally died down and she had walked to her car near El Centro College, she heard the first barrage of shots as a group of protesters ran toward her, away from the fire. For about 40 minutes, she said, police shouted at protesters to move from one block to the next as officers tried to chase down suspects.

Mann said that at one point she laid down with a group on the grassy knoll of Dealey Plaza, a downtown park that is best known as the site of the 1963 assassination of President John F. Kennedy. At another point, she said, she was by the county jail a few blocks away before running across the Commerce Street Bridge over the Trinity River, away from the police scene.

“It was like nothing I had seen before,” Mann said. “We just kept following what the police told us to do.”

Dallas police on Thursday night released a photo of a black man wearing a camouflage shirt and toting a gun. The department’s official Twitter feed identified the man as a suspect, though David Brown, the police chief, later described him as a “person of interest.”

The man shown in the photo, Mark Hughes, told KTVT-TV that he turned himself into police after learning he was publicly identified as linked to the shooting. He was later released from custody and told the TV station that he was wrongfully accused.

“Immediately, I flagged down a police officer,” Hughes said. He said officers subjected him to a 30-minute-long interrogation, and he accused police of lying to him, telling him they had witnesses and video indicating that he fired his gun.