From youth football to SIU: Three Salukis were often on same field as kids 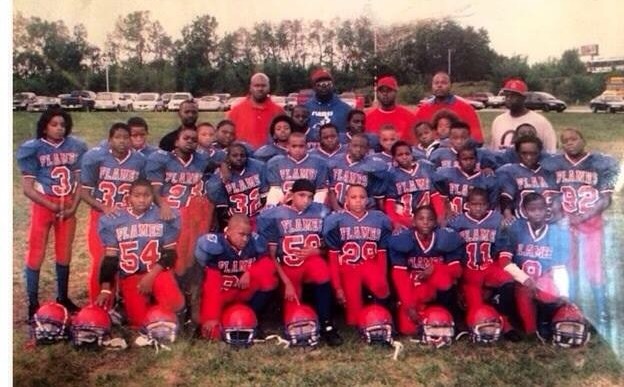 Now SIU sophomore wide receiver Jimmy Jones and junior linebacker Kyron Watson pose for a team photograph in the JJK little league. Jones was No. 3 and Watson was No. 33 in this photograph. (Photo provided by Jimmy Jones)

Three Salukis were rather familiar with each other before throwing on the same uniform this season.

Growing up within 30 minutes of each other, SIU sophomore wide receiver Jimmy Jones, junior linebacker Kyron Watson and junior cornerback Craig James often played on the same fields before coming to Carbondale.

Jones and Watson played for the JJK Flames little league team for two years together during their Pop Warner days in the St. Louis metro east area. Jones’ father, Jimmy Jones, Jr., knew Watson’s parents and brought the boys together to hang out, which started their friendship.

James, an Edwardsville product, also has very close childhood ties with Watson and Jones. He played alongside Jones and against Watson at Lincoln Middle School in Edwardsville and at Edwardsville High School.

Tiffany Valentine, Jones’ mother, said she sees Watson and James as her sons.

“The same way I yell at Jimmy, I also yell at Kyron and Craig,” Valentine said. “They go so hard in football and they turned out to be great men.”

Watson, an East St. Louis native, transferred to SIU from Kansas last season because he said he wasn’t satisfied with the football atmosphere. He had committed to the Jayhawks as a four-star recruit.

After given the opportunity to come to SIU, Watson immediately connected Jones, who he considers a brother.

“Growing up, Kyron was one of the good guys on the team and we kind of [clinged] together,” Jones said.

Jones said the two now hold each other accountable on the field and in the classroom.

In the spring semester of his freshman year in high school, James — who was playing alongside Jones and against Watson — transferred to Hazelwood East High School in St. Louis. The former Football Bowl Subdivision player transferred to SIU this season to be closer to his family.

“Jimmy lived down the street from me,” James said of his bond with Jones. “Anytime I needed something, I could always go there.”

Watson played for East St. Louis Senior High School, where he faced off with James.

“Me and Kyron always played against each other,” Watson said. “It was nice coming to SIU so we could use our forces together.”

Jones said one of his fondest childhood memories was of the Oklahoma drill, where players lined up and ran directly at one another.

“We were the hardest hitting dudes on the team,” he said. ”So if somebody got in trouble, they would have to go against us in the Oklahoma drill.”

James’ brother Cameron said seeing all three of them is something special to watch since the three had yet to wear the same uniform.

“They play with a lot of passion,” James said. “It’s nice getting all them together on the same team and seeing what they can go.”

Staff writer Tyra Wooten can be reached at [email protected] or on Twitter @twootenDE.