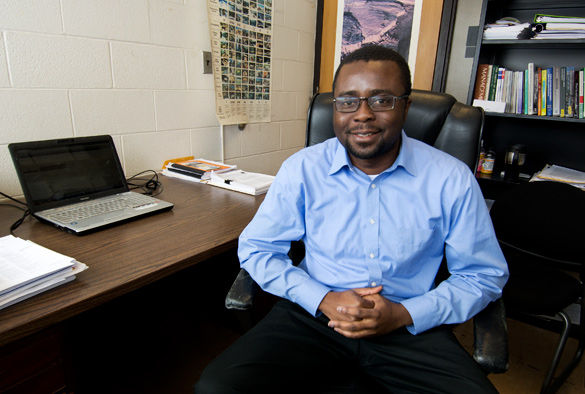 After studying on three continents, one professor has found a home at SIU.

Kofi Akamani, who is an assistant professor of forestry, was born and raised in Ghana but has been working at SIU since 2011.

Located in western Africa, Ghana is home to more than 25 million people. Akamani grew up in the city of Kumasi, and earned his bachelor’s degree in development planning from Kwame Nkrumah University of Science and Technology.

These experiences have given Akamani an interesting take on race. As important as race is, society cannot ignore problems like the environment and social inequality, he said.

Growing up in Ghana, he said society was more worried about interactions among ethnic groups, instead of race, because land ownership and other rights were dependent on ethnic class.

In 2004, he left his temperate home for the Norwegian tundra.

There, he found Norway to be less diverse, and was told the older natives were unfriendly toward immigrants.

He said he never felt discriminated against but never considered staying in Norway. He suspected there were not many institutional safeguards for immigrant opportunities.

He said he saw other Ghanaian people with master’s and doctorate degrees who were overqualified for the jobs they had.

“I didn’t want to be a part of that. If I was in Norway, I don’t believe I would be in the position I am here.”

After coming to America he found the population to be more diverse and welcoming.

While living in Idaho for five years, he said he never felt oppressed or profiled. His only issue relating to the color of his skin came from a small child asking if he had drank too much coffee, turning his skin dark.

Even though Akamani has not experienced many of the negative racial issues in American history, he is aware of those troubles. He said it is important to recognize and celebrate Black History Month, but society needs to address inequality at all levels.

Equality is a journey, he said. Racial progress should be broadened to all marginalized groups, including gay people, women and the impoverished.

Having diverse viewpoints helps students because they can understand issues outside of their own perspective, Williard said. He anticipates Akamani being at SIU for a long time because of his upbeat and positive attitude.

Akamani’s views on his field of study changed through the years.

His parents were farmers and had no access to formal education, so he learned step by step.

Even though he is working on sustainable development and planning, Akamani said he had no interest in the subject before college.

Akamani researches the policy and decision making related to sustainability, and how resilient communities are.

“Community resilience is all about a community’s capacity to deal with unpredictable forces of change, as well as being able to maintain their well-being,” Akamani said.

There are multiple forms of unpredictable change. Demographic, economic and technological transitions are one set of natural occurrences, but natural disasters and environmental policies are another.

While working on his doctorate in Idaho, Akamani studied the Northwest Forest plan, started in 1994.

The policy reduced wood harvesting by as much as 90 percent in some areas. Certain towns were dependent on the timber industry for decades, so they had to find ways to adapt.

Ten years later, more than 1 million new jobs have been added to compensate for lost jobs in the lumber industry. Larger communities were able to handle the decision and grew in population.

Communities with the right resources and institutions could survive, while smaller, wood-dependent communities did not.

Jim Zaczek, chairman of the forestry department, said he has enjoyed having Akamani on staff.

“You need to know biology and ecology, but the human dimension is where you make change,” Zaczek said. “People are the main dimension of anything.”

Akamani said the past progress in race relations had diverted attention from environmental and socioeconomic problems.

Akamani said he has not been back to Ghana since 2010, but he looks forward to taking his wife and child to his native land in the near future.