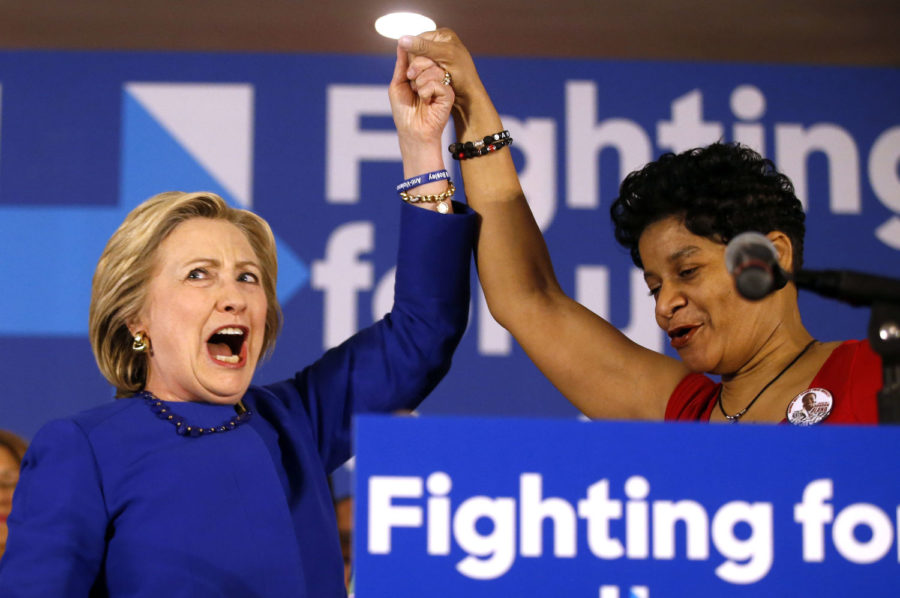 A spirited Democratic presidential candidate Hillary Clinton, left, joins Geneva Reed-Veal, the mother of Sandra Bland, during a campaign rally at the Parkway Ballroom on Chicago's South Side in March. (Chicago Tribune)

WASHINGTON — The cooks at Chipotle are making more. Construction workers have more jobs repairing bridges and roads all over the country. Immigrants here illegally walk down the street without fear of deportation. Poor women get abortions paid for by the taxpayers. Gays and transgender people have more rights and opportunities.

At the same time, there are fewer jobs like those at Chipotle. Some big businesses such as energy giant Exxon Mobil are paying billions more in taxes. And the wealthy are paying more in taxes, often a lot more.

Welcome to President Hillary Clinton’s America. She wouldn’t get everything she wants, of course. But if she did, this is how her 2016 promises would pan out for people in four years — based on independent analyses of her policies in areas including taxes, wages, trade, health care, immigration and abortion rights.

Here’s a snapshot of the nation after four years with Clinton at the helm.

Construction sites are humming across the country, with new workers in bulldozers, cranes and other heavy equipment repairing long-neglected highways and bridges, modernizing airports and refurbishing dams and levees. They started after Clinton in her first 100 days won approval of a $275 billion overhaul of America’s infrastructure, the centerpiece of her jobs plan.

Those at the bottom are making a little more money. The cook grilling chicken at Chipotle, the cashier scanning groceries at Wal-Mart, even the EMT responding to 911 calls all are making at least $12 per hour, up from $7.25 per hour when Clinton took office.

There are, however, fewer of those jobs. With or without those minimum wage jobs, students looking for a leg up now attend community college for free. And those with family incomes up to $125,000 will be able to attend public colleges and universities for free in 2021.

For those still carrying college loans, interest rates are lower after Clinton allowed borrowers with outstanding debt to refinance their loans at current rates, provided help to delinquent borrowers and established a three-month suspension on all federal student loan payments to help borrowers get their affairs in order

The 116,000 U.S. households making $1 million a year each now pay an average of $176,000 more in federal income taxes. That’s the result of Clinton’s push for a minimum tax rate of 30 percent for them, according to a 2015 estimate by the nonpartisan Tax Policy Center, a joint program of the Urban Institute and the Brookings Institution.

Families making $5 million or more also are paying a surcharge of 4 percent, according to an analysis of her plans by the Tax Policy Center.

Death is no escape for the wealthy. The estate tax is higher, and it applies to more estates. A typical American family, though, still owes about the same in federal taxes that it did in 2016. That’s about $1,750 for an average family of four with a yearly income of $60,000, according to Roberton Williams, a fellow at the Tax Policy Center.

Lowering corporate taxes was not part of Clinton’s agenda. Instead, she raised taxes and fees, sometimes to pressure business to change its behavior, sometimes to raise money for other uses. Companies leaving the U.S. to dodge taxes, for example, now pay an “exit tax” on their untaxed earnings.

The fossil fuels industry took a hit, too. Giants such as Exxon Mobil, Chevron and Occidental as well as others lost $4.7 billion-a-year’s worth of tax breaks that they had longed enjoyed.

Consumers and small businesses now have a public option — a federal health care plan — as one of their choices among the private insurance plans available through the Affordable Care Act marketplace and other avenues. Additionally, a migrant agricultural worker in California’s Central Valley and others here without legal documentation — a groundskeeper in Florida or domestic worker in North Carolina — can get medical insurance through the health care law.

More health care workers — physicians, nurses, counselors, dentists — receive assistance with their training bills in exchange for using their skills in under-served areas, as Clinton put more money into the National Health Service Corp. Families with high out-of-pocket medical costs receive refundable tax credits of up to $5,000 — $2,500 for individuals — if their expenses exceed 5 percent of their incomes and they don’t qualify for Medicare.

Women still can get abortions without restrictions and Planned Parenthood clinics remain open.

More than that, poor women for the first time now can get abortions paid for by Medicaid. Clinton had pledged to repeal the Hyde Amendment, which had prohibited the use of taxpayer money for abortions since 1976.

Immigrants in the U.S. illegally no longer fear deportation after she greatly reduced the numbers being sent back home. Surpassing her predecessor, Clinton stopped the deportation of parents of Dreamers — children brought into the country illegally — and parents of Americans and lawful residents.

She also stopped deportations of immigrants with histories of service to their communities or who had experienced extreme labor violations, children and teenagers, and those who’d recently arrived in this country. Instead, she spent money on detaining and deporting violent offenders.

A massive rewrite of the nation’s immigration laws is now providing a pathway to legal status or citizenship for millions who came to the U.S. illegally. Security at the southern border is bolstered and a backlog in those wanting visas eliminated.

“Hillary Clinton will set a much needed tone of acceptance and pride,” said Angela Kelley, a, expert on immigration and senior vice president at the Center for American Progress, a left-leaning think tank.

Clinton signed the Equality Act amending the Civil Rights Act of 1964 to include banning discrimination based on age, gender, sexual orientation, marriage, disability and more.

Gay teenagers are more welcome at homeless shelters. Police officers are trained to be more sensitive in their interactions with LGBT people. Counselors are forbidden from using so-called conversion therapies.

For the first time, Americans are being asked to answer questions on sexual orientation and gender identity on census forms. Transgender Americans are more easily able to change their gender on identification documents.

Virtually no child is being born with HIV, the risk of becoming infected is far lower and those who do become infected receive the needed treatment to prevent them from developing AIDS.

The Supreme Court swung left under Clinton as she filled vacancies from a list that included several potential firsts.

There’s Obama’s pick, who was never confirmed, Merrick Garland, chief judge of the U.S. Court of Appeals for the District of Columbia Circuit. Appellate Judge Sri Srinivasan is a native of India who was seriously considered for that nomination. California-based federal appellate Judge Paul Watford would give Clinton a shot at appointing another African-American to the high court.

Several other potential candidates are female and/or Asian-American.

Among the issues: the Obama administration’s policy halting the deportation of immigrants who are in the United States illegally; challenges to the so-called “contraception mandate” in the Affordable Care Act; transgender rights; and Second Amendment protections for gun owners.