How to really discuss radical Islam 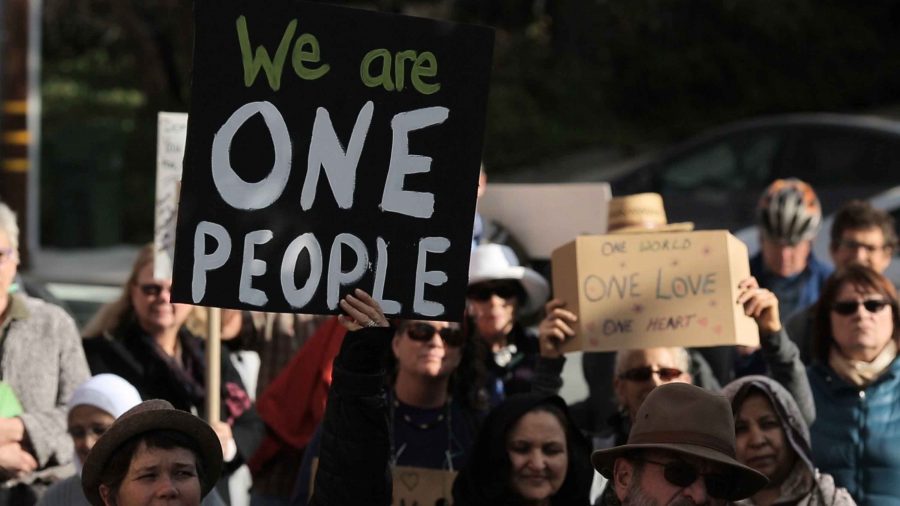 Supporters of the Muslim community gather at Mosque of Nasreen in San Luis Obispo, Calif., during a rally for peace weeks after the San Bernardino terrorist attacks. (Jessica Koscielniak/McClatchy Washington Bureau/TNS)

By Jonathan Zimmerman | The Philadelphia Inquirer

Let’s suppose you’re teaching a current-events class about terrorism, and a student says that Muslims should be banned from the United States. What should you do?

Here’s what you shouldn’t do: Shut down the conversation. Like it nor not, millions of American adults agree with the student’s statement. We can’t pretend otherwise when the kids are in the room.

Nor should you sugarcoat the subject by denying its religious dimension. It’s tempting simply to inform class that Islam is a “peaceful” religion, so people like Ahmad Khan Rahami — the accused attacker in the New York and New Jersey bombings — aren’t “real” Muslims.

Indeed, Rahami’s story is an all-too-common one in the modern West. A young Muslim with low-paying work and a petty-crime rap sheet visits the Middle East or South Asia and returns home as a religious radical, vowing to pursue martyrdom through violence. Rahami also brought back a Pakistani wife, who left the United States before the bombings.

And he developed an affinity for Anwar al-Awlaki, the American-born cleric who led al-Qaida in Yemen until he was killed by a U.S. drone strike in 2011. But al-Awlaki’s online sermons remain popular among jihadists like Rahami, who praised al-Awlaki in a notebook discovered after his arrest.

Instead of denying Rahami’s obvious roots in Islam, then, teachers need to ask students questions about it. Why have young Muslims like Rahami turned to terrorism? And what can we do to stop them?

The first line of inquiry will require teachers to explore the long history of Islam, about which most Americans remain depressingly ignorant. In a 2009 Gallup poll, nearly two-thirds of respondents admitted they had “little or no knowledge” of Islam. And in a Pew survey later that year, just four of 10 respondents knew that Allah is Islam’s name for God and that the Quran is its sacred text.

Teachers should also explore the more recent rise of Islamic radicalism, starting with American support for the fundamentalist mujahdeen in Afghanistan during its war against the Soviet Union. Then students need to examine the Sept. 11, 2001, attacks and the subsequent U.S. invasions of Afghanistan and Iraq. Unless you think about this history, you can’t understand the mindset or motivations of people like Rahami.

Next comes the even harder question: What can the United States do to prevent further attacks on its soil? According to a survey in March by Morning Consult, 50 percent of Americans — that’s right, one half of us — believe that the solution is a temporary ban on Muslim travelers to America.

And they’re not all aligned with Donald Trump, either. True, 84 percent of Trump supporters backed the ban on Muslims. But so did 37 percent of people favoring Hillary Clinton and 27 percent of Bernie Sanders’ backers. Overall, 71 percent of Republican voters and 34 percent of Democrats agreed with the Muslim ban.

So teachers can’t dismiss this sentiment as a fringe or “alt-right” issue, unworthy of discussion in their classrooms. To the contrary, the huge popularity of banning Muslims makes it all the more imperative that we address it head-on.

It won’t be easy. In several states, conservatives have pressured schools to remove any mention of Islam from the curriculum on the specious grounds that it will “indoctrinate” their children into the Muslim faith. That confuses teaching about religion with teaching kids to believe in one.

In more liberal precincts, meanwhile, parents and teachers worry that discussion of the Muslim ban might offend Muslim students in the class. But these kids already know that there are plenty of Americans who don’t want them here. We don’t do them any favors by suppressing that view instead of bringing it into the open, where it can be analyzed and challenged.

And liberals condescend to all of our students if we try to deny the Islamic dimension of contemporary terrorism. That’s what former Democratic presidential hopeful Howard Dean did in 2015, when he claimed that the Charlie Hebdo attackers in Paris were as Muslim as he is — in other words, not Muslim at all. More recently, Dean told reporters that Iran is “not a Muslim country.”

He meant that terrorists (and their enablers in Tehran) don’t represent mainstream Islam, and of course he’s right about that. But they do reflect a dangerous strain of the religion, and it’s dishonest to suggest otherwise. For many of us, banning all Muslims because of a few terrorists insults our common sense of justice. But denying that the terrorists are Muslim insults our common sense, period, which is almost as bad.

We are better than this. In my heart of hearts, I believe that our students will reject the growing trend to tar all Muslims with a single brush. But we won’t help them do that if we simply brush the entire question under the table, or if we paint a pretty picture that doesn’t match what all can see with their own eyes.