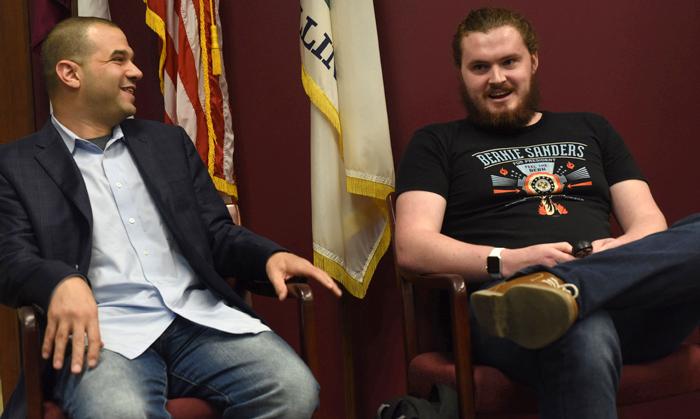 Two SIU alumni and staffers for Bernie Sanders returned to the university on Tuesday to reveal the secrets behind the campaign that got the attention of millennials across the country.

The event — the first of the semester in a series called “Pizza and Politics,” which is organized by the Paul Simon Public Policy Institute — gathered about two dozen students.

“One of the big takeaways I got … is how integral technology is to a presidential campaign,” said Zach Schneider, a 2015 SIU graduate who worked as the senior staffer in charge of technology for the Sanders campaign.

“He made it clear he probably wasn’t going to win,” Tagaris said in reference to Sanders’ attitude about his campaign against presidential candidate Hillary Clinton for the Democratic nomination. “But he was in it to win it.”

Tagaris, who is now a digital consultant for Bill de Blasio, the mayor of New York, said his initial projections for campaign donations were around $30 million to $50 million. Within a day of the online campaign opening, he said $1.5 million were donated by 35,000 supporters.

“We were onto something extraordinarily special,” he said. “Because of our early success, we decided that the way we raised money would be central to the campaign.”

Tagris went on to reference “Birdie Sanders,” a nickname acquired by the politician after a bird landed on Sanders’ podium while he was speaking at a rally in Oregon. He said “Birdie Sanders” stickers were made and sent to anyone who donated to the campaign. Following the announcement of the sticker, supporters donated $1.6 million in 24 hours.

The online approach successfully reached a younger audience; the most common age of donors was 27, and 94 percent of all donations were made online, he said. But Tagaris’ early projections were blown out of the water with eight million contributors donating $218 million by the end of the campaign.

Schneider, who is now a software engineer with aHa! Labs Inc., said his biggest takeaway from the Sanders campaign was helping introduce technology that changes business without scaring people away.

Schneider, who was twice on SIU’s championship debate team, said one such method was “text banking,” as opposed to phone banking. This allowed younger supporters to be reached more easily.

Despite these technological strategies, Tagaris attributed the success of the campaign to the candidate’s authentic message.

Tagaris said he hopes the Sanders campaign will change the way campaigns are funded and allow a future where people from any economic background can run for any office.

“You don’t have to be a millionaire,” he said.

Staff writer Hannah Cooper can be reached at [email protected] or on Twitter @hcooper_DE.