Graduate assistantships at SIU have been on a decline for years. Here’s why students say that’s a problem. 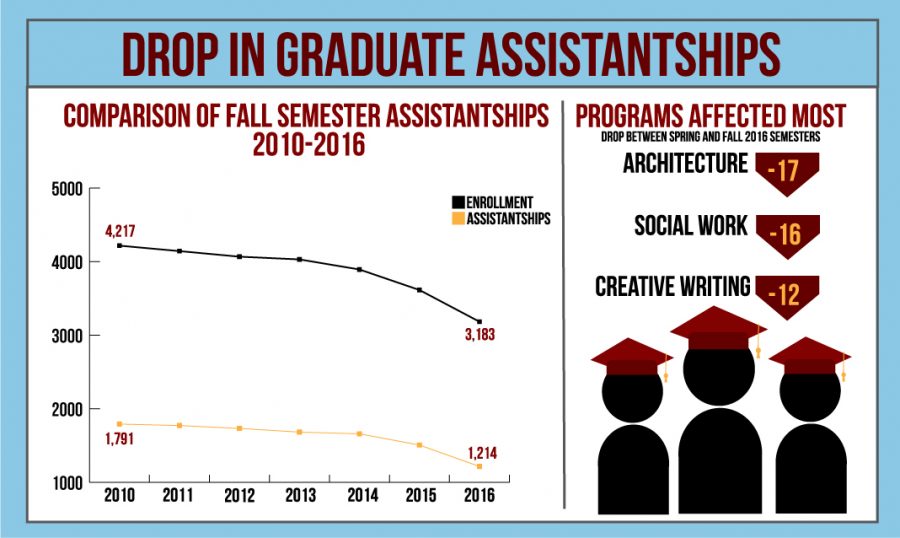 For Mohamad Baba, an international doctoral candidate, having a graduate assistantship meant the difference between staying in the country and having to leave.

He has now lost that assistantship. He is not alone.

SIU graduate students seeking employment are finding assistantships more difficult to obtain this semester as the number of those offered has dropped. University data shows that graduate assistantships were reduced by 265 positions from Spring 2016 to Fall 2016.

Baba, 44, returned to the U.S. in 2012 to pursue his doctorate after spending about 12 years teaching higher education in his native country of Malaysia. Four years ago, he and his wife decided to move to Carbondale to finish doctorate programs.

SIU is one of the few universities in the country that offers the degree programs Baba and his wife, Masita, are pursuing. Getting a graduate assistantship at the university was also influential, he said, considering his status as an international student.

As a research assistant, he was tasked with designing interactive, online-only courses for the university’s catalog. The assistantships funded educational and living expenses, plus the cost of raising their three school-age children.

When he and his wife both lost assistantships in May, the bills at home began to pile up.

“That is why we’ve been sort of struggling,” Baba said during an interview Monday.

For the 3,183 graduate students enrolled this semester, there were 1,215 assistantships offered, university data  shows. That pans out to one assistantship for every 2.6 students. By comparison, the graduate school enrolled 4,217 students and granted 1,791 assistantships in Fall 2010.

Public universities around Illinois were forced to trim budgets in reaction to lowered state appropriations from the ongoing budget crisis. During his State of the University address, interim Chancellor Brad Colwell said SIU has become too dependent on assistantships as a recruitment tool.

Colwell said thinking that assistantships should be guaranteed with admission to a graduate school is something that needs to change. He said he hopes to increase graduate student enrollment by 10 percent while getting more students to pay their way to attend high-demand programs.

But some within the graduate school argue such a practice limits the access to higher education.

Graduate students may transfer to other universities or suspend their education if they are unable to secure an assistantship at SIU, said Brandon Woudenberg, president of the Graduate and Professional Student Council.

As a graduate student, Flowers said there are two main things that will draw students to a school: research-intensive faculty and graduate assistantships.

If a graduate school has highly trained faculty in both narrowly focused subjects and a broad variety of subjects, he said, that will encourage graduate students to enroll. The other aspects students consider are the research and funding opportunities provided to them through assistantships, Flowers said.

But a graduate school has to have one or the other, and SIU is losing both, Flowers said.

“Most students will not come to an institution where the best and brightest faculty are looking for a way out and they’re not going to be funded,” Flowers said. “Either give them research opportunities through GAs, demonstrate the ability to retain excellent faculty, or do something else.”

He said the problem isn’t a lack of brilliant faculty on campus; it’s that some of the best faculty members are leaving at a rapid rate.

Meanwhile, enrollment in the graduate school is down by 431 students from 2015, according to data released by the university.

The loss of faculty coupled with the reduction in graduate assistantships means these enrollment numbers are likely to stay down, Flowers said.

Interim Vice Chancellor for Research Jim Garvey said deans had to choose between cutting graduate assistantships, non-tenure track faculty or non-salary costs, and many made the decision to cut the assistantships.

This was not a decision anyone was happy to make, but it arose out of necessity, Garvey said.

The most affected programs were architecture, social work and creative writing. From last spring, these programs have lost 17, 16 and 12 assistantships, respectively.

The liberal arts and humanities assistantships face greater losses because they aren’t able to secure as much external funding through grants and sponsors as the science, technology, engineering and math fields, Garvey said.

He sees the assistantship reduction as an issue that will mainly affect teaching at the university.

Research assistants also produce new information through dissertations and theses that Garvey is able to include in grant proposals to secure more funding. With fewer research assistants, there will be fewer grants, Garvey said.

External research funding is up by $13 million from the 2015 fiscal year, but as this money primarily goes to STEM fields, the main concern now is making sure liberal arts departments don’t suffer disproportionately, Garvey said.

He said these assistantships and graduate students as a whole are vital to the university.

“They stimulate the intellectual efforts of the university,” Garvey said. “They inspire us and provide new information and I wouldn’t be here doing what I do today if it wasn’t for the hard work of my graduate students.”

Flowers agreed, saying that graduate assistantships should be eliminated only with the utmost caution.

“The elimination of GAs seems to be an unsound strategy for saving money because you are literally cutting away at the academic workforce that frees up your tenure track faculty to perform the necessary functions that keep the university a Tier 1 research institution,” Flowers said.

Because of the economic climate of Illinois, when assistantships are eliminated or not renewed, many students cannot afford to continue their graduate education, Flowers said, adding that those most affected by this are the underrepresented, low-income and first generation graduate students, Flowers said.

“They simply disappear,” Flowers said. “They’re trying to find a job, they go back home, whatever — many of them are struggling to survive.”

“GAs are the ones who teach your courses,” he said. “We’re the ones who advocate on your behalf in faculty meetings, we have access to larger and more expansive administrative decision making committees than most undergraduate organizations, and we are also your future.”

Graduate assistants are also tasked with the mentorship of undergraduates, many of whom find it easier to talk to graduate students than faculty about personal struggles and complications that may be affecting their coursework, Flowers said.

“I can safely speak for a majority of GAs when I say that we’re here for you. You don’t always see us fighting for you, but it’s something most GAs take as a serious responsibility in their position,” Flowers said. “If we’re gone, the only people you have left are faculty.”

As for Baba’s wife, Masita, she was recently granted a position at the university working with undergraduate researchers. It is the only income the family of five has had in the last few months. In the meantime, Baba is working to finish his dissertation and preparing to defend his thesis. His coursework is finished, but he had to enroll in a single credit hour course to keep his apartment at Evergreen Terrace.

Though the family initially weighed the option of returning to Malaysia, Baba said some things have fallen into place that should allow him to finish at SIU. He said he hopes to attain his degree within one year.

“The most important thing when you come here is, you want to try to finish your studies,” Baba said. “That is our struggle.”

Bill Lukitsch contributed to this report.