Why Tulsa and Charlotte reacted so differently to police shootings 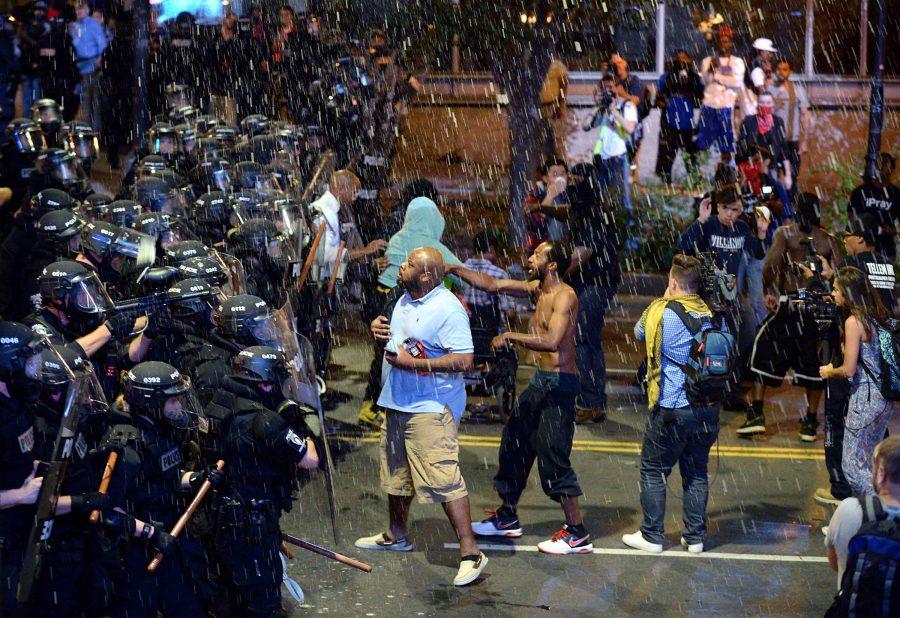 Debris falls upon Charlotte officers and protestors as officers began to push protestors from the intersection near the Epicentre Wednesday, Sept. 21, 2016 in Charlotte, N.C. The protestors were rallying against the fatal shooting of Keith Lamont Scott by police on Tuesday evening in the University City area. (Jeff Siner/Charlotte Observer/TNS)

CHARLOTTE, N.C. — The recent fatal police shootings of two black men spurred soul-searching across the nation but drew vastly different reactions from the cities in which they took place.

In Tulsa, Okla., on Thursday, a group of 50 demonstrators was preparing to march when people suddenly started cheering. “Have some ice cream!” activist Shay White told demonstrators from a microphone. The officer who shot Terence Crutcher had just been charged with manslaughter. White told everyone to go home to rest, and the crowd quickly obliged.

At the same time, more than 1,000 miles away in Charlotte, marchers were just getting started. They attempted to take over a highway when police in riot gear hit them with tear gas.

“We want the tape!” they shouted, demanding that police release the video of Keith Lamont Scott’s death.

Both cities have a fraught history with race and policing. But Tulsa, the more segregated of the two, has attempted reforms in recent years and embraced transparency in dealing with the community after a shooting.

Charlotte, on the other hand, is still reeling from an incident in September 2013, when a white police officer fatally shot Jonathan Ferrell, an unarmed 24-year-old black man, with 10 bullets after he crashed his car in a neighborhood a few miles from where Scott died.

A jury deadlocked in the trial last year and the dead man’s family settled a civil lawsuit with the city for $2.25 million. Police have faced criticism for being slow to implement the racial bias training and community outreach they promised after the shooting.

In Tulsa, clergy-led vigils followed Crutcher’s shooting, with the city’s police chief vowing to “do better.” Within two days, video of his death was released to Crutcher’s family, who watched it with black pastors and elected officials. At one point, the chief consoled a family member who couldn’t endure the footage.

Police publicly released video clips a day later, and charges were filed less than a week after the shooting.

In Charlotte, protests left businesses looted and a 26-year-old protester dead. Hundreds came into the streets of downtown as the National Guard patrolled with rifles.

Police showed Scott’s family video of the shooting two days after his death, but vowed not to release footage to the public despite family demands. The police chief said he was against “full transparency” and suggested charges — if any — would be pressed only after a protracted investigation.

He relented to pressure four days after Scott’s death, releasing inconclusive tapes that further fueled anger on the streets and demands from demonstrators for more evidence. The officer who shot Scott is on leave. The city-imposed curfew was lifted Sunday.

“What [was] there to hide? Why did this happen in Tulsa and not here?” said the Rev. Rodney Courtney. “We look and we wonder.”

Courtney is an activist and pastor at Neely’s Grove AME Zion Church in Gastonia, outside Charlotte.

Marq Lewis, who helped organize protests in Tulsa, said the release of the police video there quickly eased building anger. Lewis praised the Tulsa Police Department, saying officers provided protection for demonstrators. “That a lot of times tears down the tension,” said Lewis, president of the grass-roots group We the People Oklahoma, referring to the group’s cooperation with officers and the release of the tape.

In Charlotte, there was disdain even among community groups that have worked with police. “To the police chief whom we had worked with very closely in the past: Shame on you,” Corine Mack, president of the Charlotte-Mecklenburg NAACP branch, said during a blistering news conference last week with black leaders.

Oklahoma passed a law in 2015 that allows for the release of body camera video, with exceptions for footage that depicts a death unless it was caused by a law enforcement officer. In North Carolina, a law will go into effect in October that prevents police from releasing such videos unless they are ordered to by a judge.

The Rev. Traci Blackmon, a United Church of Christ pastor from Ferguson, Mo., who was on the front lines there after the 2014 shooting of Michael Brown, said both cities had learned from the social movement that has grown around police shootings but had diverged in their reactions.

“What I see is the consequence of seeing this play out in Ferguson, in Baltimore, in Chicago, in Texas. You have quicker responses by people who now come together,” said Blackmon, who met over the weekend with black clergy including Courtney to plan the launch of a Commission on Reconciliation and Equity.

“I don’t give the kudos to charge an officer with manslaughter when it’s murder, but it is a step forward from what we have had in the past,” Blackmon said.

There were also significant differences in what the videos displayed. The footage of the Tulsa shooting clearly shows Crutcher had his hands up and that he had no gun; the video of Scott’s shooting doesn’t make it clear whether he had a gun and shows his hands at his side. But reaction to the shootings varied before the public or families had seen police evidence.

In Tulsa, community members credited clergy in keeping demonstrations peaceful before video footage was released, while protests in Charlotte were initially less organized and erupted into riots hours after Scott’s death.

Though action in both cities was dominated by locals, the Charlotte protests also attracted a handful of high-profile activists from California, Missouri, South Carolina and other states.

Courtney, the North Carolina pastor, suggested that greater numbers of people may have protested in Charlotte because the city has a larger African American population and more black-run institutions. Among its 800,000 people, 34 percent are black and 44 percent are white.

The city has one of the fastest-growing poverty rates in the country, which is largely concentrated in poor black neighborhoods on its west and east sides, fueling a larger sense of inequality that was on display at the protests. But those trends don’t “explain or excuse violence,” said Courtney, noting that police in riot gear and memories of other recent police shootings made for a volatile climate.

The city of Tulsa, with 400,000 residents, is 15 percent black and 57 percent white, and has its share of controversy over policing. Black residents largely live on the city’s north side, where Crutcher died.

The scars of violent 1921 race riots linger, and activists said a collective memory of them may have made protesters more hesitant to express themselves through property damage. The 1921 violence began after accusations spread that a black teen had assaulted a white teen, and a white mob burned 1,100 businesses and homes in a black neighborhood. As many as 300 people died.

Activists have criticized the city’s police, saying they have shifted in recent decades from a community policing model. Crutcher’s shooting came nearly five months after a Tulsa County volunteer deputy was sentenced to four years in prison on a manslaughter charge for shooting and killing Eric Harris, an unarmed black man, during an undercover operation in 2015. The white reserve deputy said he mistakenly reached for his gun instead of his Taser.

Small rallies have continued in Tulsa, where some residents have pressed for murder charges against the officer who shot Crutcher.
Nancy La Vigne, director of the Justice Policy Center at the Washington-based Urban Institute, said the contrasts between the two cities boiled down to the “difference between being open and transparent and not.”

“You can see for yourself,” La Vigne said. “It’s stunning.”