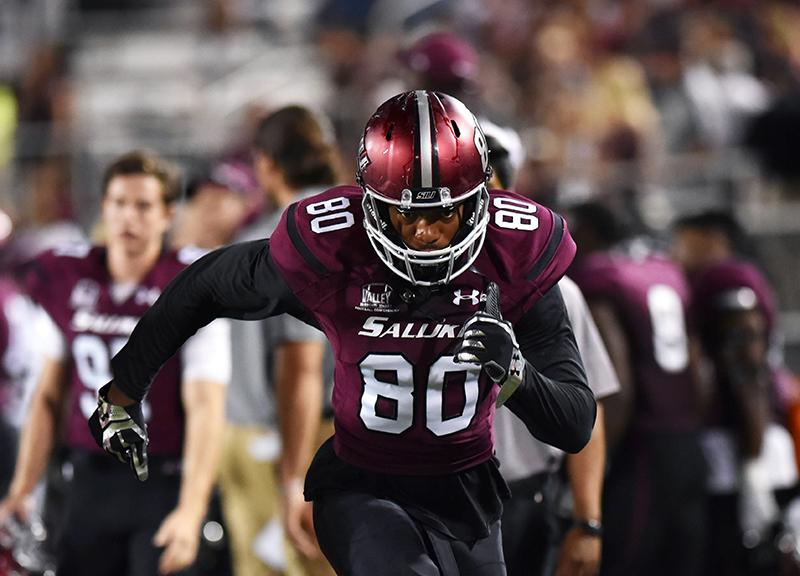 Playing at one of Chicago’s biggest high school basketball powerhouses might make some athletes wilt under the pressure of national attention.

“It was good experience,” Gardner said. “Being the top player at grammar school and then going to a school with elite athletes showed me it was time to put some work in.”

The tight end was a two-star recruit coming out of high school and was selected to the All-City team by the Chicago Sun-Times. Playing basketball at Simeon with the 2014 NBA draft No. 2 overall section Jabari Parker left an impression on Gardner.

“I blocked Jabari a lot in practice,” he said with a laugh. “He was such a great player and leader off the court. I felt like I could use a lot of that in the real world too.”

During his time at Simeon, Gardner and Parker — who now plays for the Milwaukee Bucks — won four straight Illinois High School Association state basketball championships. With all the success, Parker also taught Gardner how to remain humble.

“He was the No. 1 player in the nation and despite all that attention, he always stayed humble,” he said.

Although Simeon is known as a basketball school nationally — graduating numerous NBA players, such as Derrick Rose and Parker — the football team had success and notoriety as well.

During his senior season, Simeon football made the Illinois High School Association state quarterfinals, the deepest in the playoffs the school had ever gone. But Gardner said he had to pick between basketball and football.

“I was getting better looks and better offers in football and when it came to the time to make my visits it interfered with basketball, so I knew that I had to let it go even though I wanted to do both,” he said.

Gardner said SIU struck a chord when he visited campus.

“It felt just like home, it felt like I was at Simeon,” Gardner said. “The coaching staff at the time showed that they wanted me the most out of all the schools. [SIU] kept in touch with me during the whole process and I felt like they showed a lot of loyalty, so I felt obligated to give it back.”

Gardner was slated to be SIU’s starting tight end before this season, but a foot injury held him back. Since then, he has played in the Salukis’ last two games against Southeast Missouri and Murray State.

So far, Gardner has not recorded a single statistic in the 12 games as a Saluki.

SIU special teams coach Jay Nunez said the skills Gardner learned while playing basketball translate well to the football field. Nunez said he was impressed with Gardner’s footwork and believes it can be traced to Simeon basketball.

“Basketball players are just really good athletes, so as far as receiving the football, he’s had a lot of experience with being able to go and get it,” Nunez said.

Nunez said watching potential recruits play other sports instead of just focusing on the sport you may give them an offer in is very important.

“I believe in guys getting out and letting it rip on fields and courts that have nothing to do with football,” he said. “With basketball, it will give you a better look at his technique.”