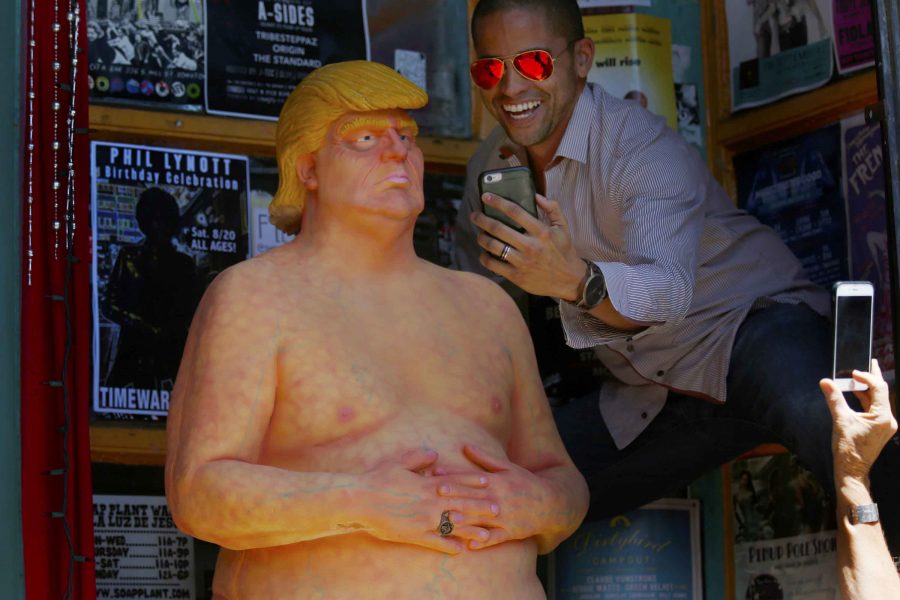 Jason Burch, 38, right, of West Hollywood, takes a selfie with a nude statue depicting Donald Trump at the entrance of Soap Plant Wacko in the Los Feliz neighborhood of Los Angeles on Thursday, Aug. 18, 2016. A Florida man was recently arrested for allegedly stealing a similar statue. (Francine Orr/Los Angeles Times/TNS)

A Coral Gables, Fla., man wanted for the theft of a naked Donald Trump statue in Wynwood turned himself in to police Friday, but refused to speak and invoked the Fifth Amendment, police said.

Pedro A. Rodriguez, a graffiti guide with a history of minor criminal acts, refused to tell police if he stole the sculpture. He wouldn’t even say if he knew where it was.

Still, police and prosecutors believe they had enough probable cause to make an arrest. So, early Friday morning Rodriguez was charged with grand theft and burglary.

“He turned himself in at our north station,” said Miami Detective Kenia Fallat. “He wouldn’t speak. We’re still trying to recover it. We don’t have it yet.”

Police said that when they arrived at the Harold Golden Gallery, a witness said he saw a man walking on the roof where the statue was put up. It was about 3 a.m. Thursday. Then, the man said, a person police believe to have been Rodriguez picked up the statue and dropped it into the back of a pickup truck.