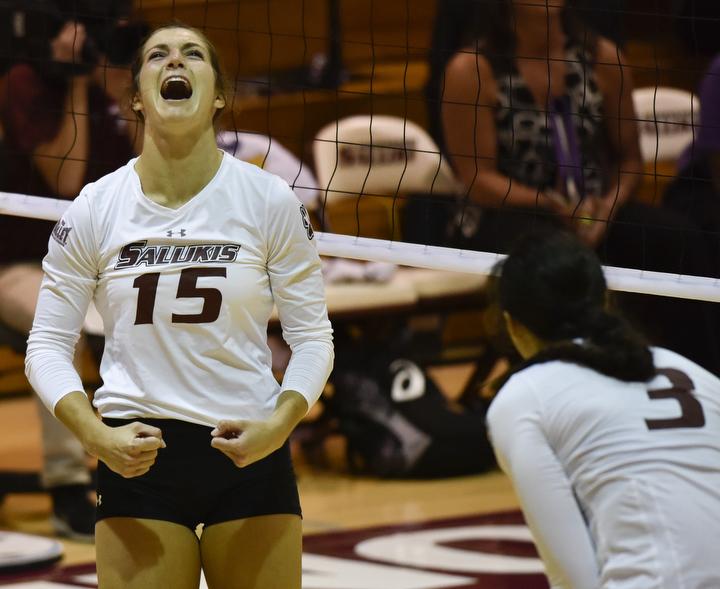 Barrow said she wasn’t surprised with her offensive output.

“We had been working on a different approach for me in practice coming into tonight with me staying lower and it paid off,” Barrow said.

The first set of the night started off fast with both teams playing with high energy. Northern Iowa was able to take a 4-0 lead and stretch it into a 14-9 lead until SIU came back to tie the set at 16-16. But then Northern Iowa used a 9-1 run to put the set away 25-18.

The second set started much better for SIU as it jumped to a 16-11 lead, forcing a Northern Iowa timeout. But the Panthers came roaring back with a 12-6 run to take the lead 23-22.

SIU had just a .146 hitting percentage after two sets while totaling six blocks.

“Abby had my back tonight whenever I missed a kill,” junior outside hitter Andrea Estrada said of Barrow. “She’s the reason we won tonight.”

The fourth set started out rough for the Salukis as they fell into a 6-1 hole early and were down by as much as 18-10 before eventually falling 25-19.

The fifth and final set was once again a back and forth affair, until SIU went up 5-2 and never looked back for a 15-13 win.

“We have so much confidence now going into conference play,” Estrada said. “The sky’s the limit from here on out.”

The Dawgs play at 7 p.m. Saturday against Drake University at Davies Gym.