Utility is key for freshman’s success 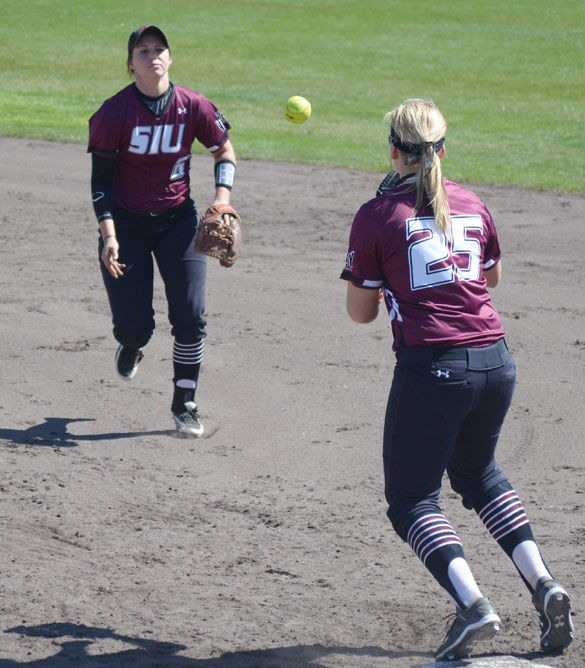 Versatility is important for a softball team and the Salukis have a freshman who is resourceful both offensively and defensively.

Savannah Fisher leads the team with a .600 slugging percentage, 2 triples and 2 home runs.

As of March 15, Fisher ranked No. 8 in the Missouri Valley Conference for slugging percentage and is one of two players in the conference with multiple triples.

Through 19 games, Fisher has started 13 and played in 15 of them. She has been used as both a second baseman and left fielder and has batted in five of the nine spots in the lineup.

Fisher said it was hard to tell how her hitting would transition from high school, but she said her travel team helped.

“I go out there and try to hit the ball hard,” she said. “I’ve been playing my whole life so I’m just building on everything I’ve learned.”

Coach Kerri Blaylock said she has no doubt Fisher is capable of hitting at the collegiate level and would like to see Fisher be an offensive leader all season.

Blaylock said Fisher never played second base before college and her utility ability is crucial for the team.

“She’s learning the nuances of [second base],” Blaylock said. “She wants to absorb information; she wants to know.”

Fisher said competitiveness is the biggest change from high school softball. In addition to the categories she leads, Fisher is tied for second on the team in total bases, runs scored and doubles with 22, 10 and two, respectively.

“I have learned a lot from them,” Fisher said. “Everyone is a leader on the team to me, and they’ve all been really helpful.”

Fisher is also skilled defensively. Blaylock said she could use her in all three outfield positions as well as the middle infield.

Gonzalez said she is impressed with Fisher’s defensive play so far this year.

“It’s really nice to see a freshman come out and perform like that,” she said. “It’s a team effort, we need everyone.”

Although Fisher’s .275 batting average is sixth on the team, she hopes to continue helping the team and improve all aspects of her game. Fisher said she needs to focus on whichever aspect of her game is struggling, whether it be offensive or defensive.

Blaylock said she would continue to use Fisher as a utility player for this season, but she would most likely settle into one position in the upcoming years.

“[Fisher] has a lot of natural talent, but she’s also working really hard,” she said. “She’s a kid that will be the first one here and the last one to leave, she wants to get better.”