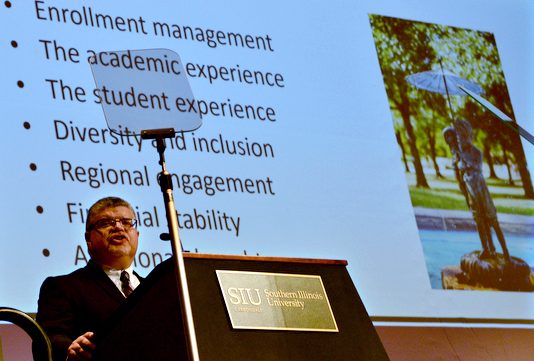 Interim Chancellor Brad Colwell on Wednesday morning delivered his State of the University address, naming enrollment management and disinvestment from the state as two primary concerns as the university enters the academic school year.

Most public universities in Illinois are facing the twofold problem of decreased enrollment and lowered state appropriations following an unprecedented state budget impasse. And with the state budget still uncertain, the university may see more cuts in the near future, Colwell said.

“We need to be prepared for the possibility that we will receive a significantly reduced level of state funding for the current year,” the top campus official said.

Two stop-gap funding measures passed by the state Legislature in 2016 totaled $83 million in state support for the university. The operational funding loss amounted to an $18 million cut from the previous year.

“The budget picture continues to be a large question mark,” Colwell said. “We are in our second year without a full state appropriation.”

Preparatory reductions to the university’s budget, which amounted to $21 million, were outlined in February to brace for impending cuts. Many of those reductions were made by leaving open administrative and faculty positions unfilled. Seven people were laid off, the chancellor said.

Though SIU has already reduced administrative costs by $5 million, Colwell said there may be more work to be done in that sector.

“Additional steps to trim expenses will be challenging but necessary,” he said.

Colwell added that it is “critically important” that the university conserve all its revenue – including state allocated funds and money generated from tuition and fees. He said the university’s top issue is increasing enrollment by 10 percent among first-time freshman, transfer students and graduate students.

A headcount released by the university in early September showed overall enrollment decreased by 7.6 percent from the previous year. It marked the first time in 50 years the university has had fewer than 16,000 students.

The largest reduction was with the freshman class, which has 660 fewer students than last year. Students in graduate master’s programs fell by 328 students, a decline of 13.2 percent, and doctoral programs had 106 fewer students, a loss of 9.7 percent.

Meanwhile, enrollment statistics at other Illinois public universities were mixed. The University of Illinois and Illinois State University recorded higher enrollments while all others saw decreases or stagnation.

Also presented during the address was the possibility of shedding some of the university’s underutilized programs.

“Frankly, if we do not do it ourselves, it will be done for us by the Illinois Board of Higher Education,” Colwell said.

SIU is obligated under accreditation standards to maintain programs until all students enrolled graduate. But major programs could be pulled from the catalog for incoming students if the Illinois Board of Higher Education, the state governing board that oversees public university programs, classifies a program as underperforming and the university fails to improve it after an 18-month probationary period. The board considers factors such as enrollment in a program, its cost to the university and its graduation rate.

“I hear too frequently that we can’t save money because change takes too long, or we can’t make change because we have to teach programs out,” Colwell said. “But if we never start, we will never make progress.”

A committee composed of the university’s Faculty Senate and Graduate Council was formed in 2015 to assess the programs offered at the university. Colwell said that report will serve as a starting point for interim Provost Susan Ford and the deans of each college to form a preliminary plan, which should be finished before the calendar year ends.

Despite the uncertainty of the state budget, Colwell said he is suggesting the SIU Board of Trustees refrain from increasing mandatory student fees for an additional year.

In terms of affordability, Colwell said current rates for tuition place SIUC in the middle of the pack compared to other state universities, and the cost of a doctoral program is among the lowest in Illinois.

“I think that’s a good place to be in a competitive marketplace,” he said.