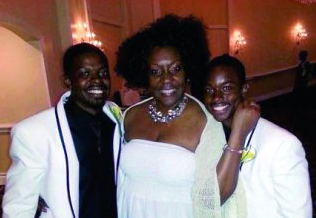 To the 11,150 fans in Saluki Stadium on Saturday, freshman running back D.J. Davis’ 98-yard opening kickoff return for a touchdown was an electric play to start a game.

But to Davis, it was validation that one of his biggest fans was still watching and guiding him.

Davis’ aunt, Lisa Foreman, of Fort Lauderdale, Fla., was one of three people killed in a Labor Day shooting in Lauderhill, a town about six miles west of her hometown. She was 50.

“It was just a game for her that I had to play,” Davis said after his breakout game. “After that I was thanking my blockers and my coaches, gave praise to God and that was for my aunt.”

Davis — who played with “R.I.P. Lisa” written across his eye black — said his aunt’s death was a case of being in the wrong place at the wrong time.

“She was in a relationship with a man who was doing bad things involved with the wrong people,” the freshman running back said during a recent interview. “She was at his house and someone came in and shot up everybody in the house.”

Lauderhill police identified the other victims as Foreman’s boyfriend Dwight Brown, 42, and his son Denzel Brown, 21. After the Labor Day shooting — which a Lauderhill police lieutenant described as an execution — more than 50 mourners lined up on the street near the home, many holding each other while crying and praying.

The investigation is ongoing and no arrests have been reported.

On evening of the shooting, Davis had left SIU’s practice field to one of the most harrowing texts one can receive.

“My sister gave me a text and as soon I got out of practice I checked my phone and she said, ‘Auntie Lisa is gone,’” Davis said. “At first, I didn’t even want to believe it. As soon as I got dressed, I went outside to give [my sister] a call.”

SIU head coach Nick Hill said he allowed Davis to go home and be with his family if he wanted, but he chose to stay in Carbondale.

“We went and got him the night he found out and we sat up here late,” Hill said. “He was up here on our couches and made sure he knew he could go home. We’re family first and an 18-year-old kid … with an aunt that he was really close with. It shows how mature he was and proved he was playing for his aunt.”

To Davis, Foreman was more than an aunt. He described her a second mother.

Her house in Fort Lauderdale was less than a five-minute drive from Davis’ childhood home in Pompano Beach. He and his sisters often visited when their mother was at work.

“She was always there whenever we needed her,” Davis said. “She always was able to watch us and take care of us, she really just wanted the best for us. … She’s such a family person.”

It was at Foreman’s house where Davis’ love for football first started.

He said his cousin, Jarrett Dieudonne — who played football at Wagner College in New York City — was the one who taught him the game as a child in Foreman’s backyard.

But Davis said his aunt’s support extended far beyond her property.

The new Saluki kick returner said Foreman attended every one of his football games during his time at American Heritage School in Plantation, a 20-minute drive west from her home.

“That’s why she was at all the games,” Davis said. “If she couldn’t get to a game, she would feel terrible about the situation.”

Once Davis came to SIU, he assumed it would mean going a long time without seeing his family. But the Salukis played their season opener against Florida Atlantic in Boca Raton, which is about 15 minutes north of Davis’ hometown of Pompano Beach.

Foreman made the trip to FAU Stadium, upholding her tradition of seeing her nieces and nephews compete.

At the time, Davis took it as a happy reunion to meet up with his family for the first time since he left for southern Illinois. He said he had an extra special embrace with Foreman.

“I went up to her and gave her a hug,” he said. “I must’ve held her for three or four seconds because I hadn’t seen her in a while.”

During their last words, which took place just about 40 hours before Foreman’s death, the two expressed their love for each other, Davis said.

Even outside the family, Davis realized how much his aunt meant to those around her.

“She strengthened everyone she was around,” Davis said. “Whoever’s life she’s in, she affected it positively.”

His words were echoed by those she worked with as a clerk at the Broward County Clerk of Court’s office for more than two decades.

“Right now everybody is in a state of shock,” Howard C. Forman, the county’s clerk of courts, said two days after she was killed. “Grief counselors are in and everybody’s remembering Lisa. That’s all I really want to say.”

Many of her coworkers took to social media to mourn their friend.

Charles Hall, felony division court operations supervisor of the Broward County Clerk of Courts, posted on Facebook saying, “I made it back to work, but coming to the courthouse will never be the same. I’ll keep looking up for you, as I need my daily wisecrack from you.”

Lauderhill Police Lt. Greg Solowsky said his department is “working hand in hand with the family.”

“There’s a lot of family members that are obviously in a very, very emotional grieving state,” Solowsky said. “They have a very large support network. They’re entrenched in our community.”

The Sun-Sentinel contributed to this report.