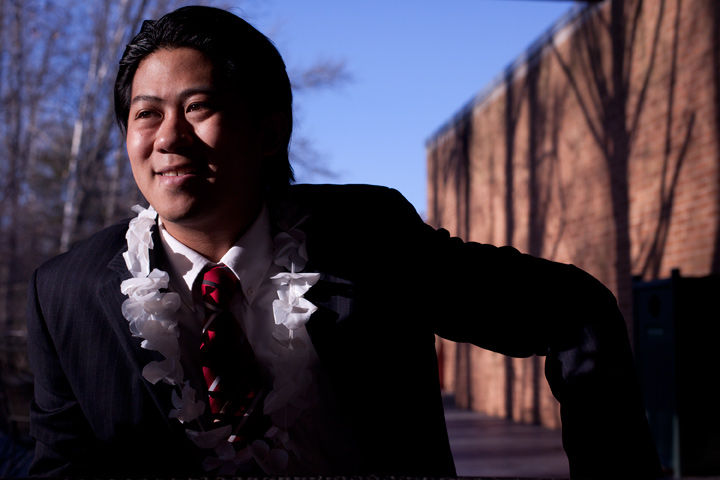 Asian-American culture is not found at Panda Express, tattooed on the backs of young women or at a dry cleaners.

A.J. Soriano, president of the United Asian American Council, helped kickoff Asian-American Heritage Month by dispelling those stereotypes of Asian culture Tuesday in the International Lounge of the Student Center.

The council is a Registered Student Organization designed to serve and unite the 328 Asian students at SIU. The month’s events highlight people from China, Japan, Bangladesh and India.

“I find Asian-American in my grandfather, who fought side by side with Americans in World War II, and taught me to never back down,” said Soriano, a senior from Downers Grove studying business management.

Soriano, who moved to the U.S. from the Philippines when he was 3 years old, said he hopes this month can help bring together Asian and American cultures.

One way of unifying everyone comes in the form of wearing a lei, a necklace of flowers traditionally given to visitors to Hawaii.

Nathan Stephens, director of the Center for Inclusive Excellence, said Martin Luther King Jr.’s March on Selma in 1965 was not just a day for African-Americans to stand together.

King and several others walked with the leis draped around their necks, showing support from the Asian-American culture.

“It may seem out of place. It may seem odd. But this flowery optimism is amidst a backdrop of intimidation, violence and federalized troops,” Stephens said.

Because of this message, all attendees were handed white leis to come together in the same way.

“These leis are symbolic of the solidarity between all of those groups as espoused today,” Stephens said. “Instead of thinking about Asians as a group, think of them as something else, as humans, just like me and just like you.”

Even though all of the white, black and Asian peoples are coming together for April, Soriano said there is still work to be done for minority groups.

One example of the unifying of Asian cultures in America began after the murder of Vincent Chin in 1982. Chin was working at an automotive supplier in Michigan when he was beaten with a baseball bat by two men who thought he was Japanese. Animosity toward the people stemmed from many American auto jobs being taken by Japanese workers. Chin died four days later, a few days before his wedding.

Soriano said Asian Americans are still questioned about their identity, as if some need them to prove how American they are.

He said it forces them to assimilate under one umbrella, when there are many different kinds.

“No other groups are constantly compared to Kung-Fu stars because of the movies,” he said.

Soriano said he hopes the month will allow people to talk about key issues like the Japanese internment camps and the thousands of forced Chinese laborers who built the Transcontinental Railroad in the 1800s.

“We don’t like to talk about how Japanese people had all of their rights taken away, even though they were American citizens,” he said. “They were placed into internment camps just because people were afraid of Japanese spies.”

Stephens, who deals with all kinds of students at the Center for Inclusive Excellence, said it is important to recognize all different cultures as equal.

He said it is important to bring students together with these events to establish connections among the SIU populace.

Stephens, a black male, working with Soriano and his primarily white fraternity brothers, is exactly what Stephens wants to see.

“Work to make those connections happen, because they aren’t accidental,” he said.

Among the speakers at the event, two Asian faculty members were honored for the service in the SIU community.

“For my siblings and my mom… the proudest of our lives was when we became Americans,” Rundblad said.

The United Asian American Council will host several other events to commemorate the month, which can be found at www.inclusiveexcellence.siu.edu.