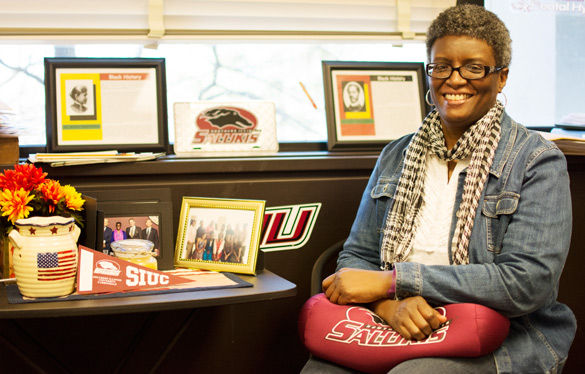 Not many people are able to connect bullets to toothbrushes.

Faith Miller spent a decade in the military before reaching her “flux capacitor” moment and becoming the director of the SIU dental program.

After beginning classes at SIU in 1979 studying foreign languages, Miller flunked out, not seeing the program as a future career. She then took one semester at John A. Logan College before leaving college behind.

From there, Miller decided to give the military a try, similar to her father, who served in the Korean War.

During her military career from 1981 to 1992, women were not allowed in combat-related jobs. Anything with artillery and infantry was off limits.

She did a research project looking at the roles of women in the military. Now the military is integrating women into many combat roles, opening more than 200,000 positions to women by 2016.

Her first time on plane was in 1981 while going to basic training in Fort Jackson, S.C. During a layover in Atlanta, she met former SIU athletic director and NFL Hall of Famer Gale Sayers. Miller may have thought this would be her last contact with the university but 10 years later, she would find her way back to Carbondale.

After basic training, she went to Fort Gordon, Ga., for communications training, her military occupational specialty.

In 1981, she was deployed to Wurzberg, Germany. The barracks were bare bones and still beaten up from World War I.

“My first night there I think I cried,” Miller said.

After eventually getting used to Germany, Miller left in 1982 and joined the Army Reserves two years later.

She traveled to several detachment units, including Turkey and back to Colorado, before declining to reenlist in 1992, shortly after the end of Operation Desert Storm.

While stationed in Colorado, Miller was required to undergo a dental exam. The hygienist showed her a piece of tooth debris and went through the guidelines of proper dental hygiene.

She said that was her “flux capacitor” moment. Instead of granting time travel like in the film “Back to the Future,” this was when she found her career interest.

She enrolled back at John A. Logan in a dental assisting program, where she found a mentor who pushed her to apply to SIU’s dental hygiene program in 1986.

Miller completed her associate’s in 1988, bachelor’s in 1991 and master’s in 1999, all from SIU. She said the dental hygiene program had an opening available in 1999, which she filled by becoming a clinical instructor.

“I was never unemployed from the time I left the military until now,” she said. “It speaks to my work ethic. Even though I’m still working to get to some places on time.”

After spending a decade in a male-dominated field—when women accounted for 9.8 percent of military personnel—she found a career path ruled by females.

Miller said blonde, white females are the typical dental hygiene student and only two members of the 16-person faculty are male.

She said going from working with mostly men to mostly women has been a big change. She laughingly said working with women is like herding cats because the passion females have affects their personalities.

Charla Lautar, a professor of dental hygiene, said Miller’s work ethic has been great for the program.

Lautar said Miller was a key figure in growing the Dental Sealant Grant Program, which provides dental exams to under-privileged kids in Carbondale and surrounding towns.

“She is very conscientious that things get done and that they get done the first time,” Lautar said.

Along with the sealant program, Miller is an active member of the community, serving as the faculty adviser for the Alpha Kappa Alpha sorority and working with the New Zion Missionary Baptist Church.

Miller was recognized for her community service with the Lindell W. Sturgis Memorial Public Service Award in 2013, given annually by the SIU Board of Trustees.

Even though she has changed career fields with different gender majorities, one thing has remained the same, people do not treat their teeth well.

“The mouth is connected to the body,” she said. “It’s the gateway to nutrition, so if we don’t address those issues, then you end up with significantly intense medical problems.”