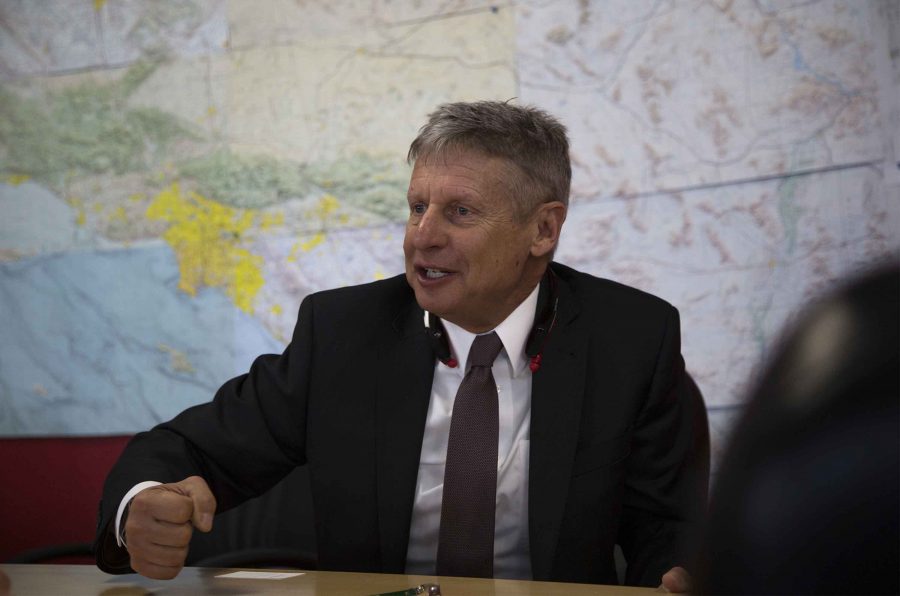 By Harold Jackson | The Philadelphia Inquirer

Gary Johnson is likely to get more votes than any previous Libertarian running for president, but he’s not even close to being qualified.

Johnson, by some estimates, served admirably as governor of New Mexico, not the most populated state, but voting for him for president would require ignoring his shortcomings. Remember the old saying about cutting off your nose to spite your face. This country doesn’t need that kind of pain. Its issues can’t be resolved by someone who means well but can’t do the job.

Johnson’s deficiencies became even more apparent during a recent Philadelphia Inquirer Editorial Board interview with him and his running mate, former Massachusetts Gov. Bill Weld. It didn’t take long to see why Weld was added to the ticket despite objections by many in the party that some of the former Republican’s views aren’t very Libertarian. His job is to fill in the blanks when Johnson falters.

“I barely squeaked by at the convention in Orlando,” Weld said. “I was a federal prosecutor for seven years; that doesn’t go down well, and you know, it’s not expansionary, but I believe in engagement abroad, as does Gary. But they were very suspicious of me, and about 20 percent of them still are.” Weld said he missed his chance to run for president as a Republican in 1996.

Johnson was asked about his slip-up when he was asked during an MSNBC interview what he would do about the besieged Syrian city of Aleppo. “And what is Aleppo?” asked Johnson. The response was particularly disturbing given how much Aleppo had been in the news, including haunting photographs of a 4-year-old Syrian boy covered in dust and blood who had survived an air strike.

“No excuse regarding Aleppo,” Johnson said Monday. “This is no excuse. I sat down for the interview. I had no idea what the context of the interview was. This is the nature of going 6 o’clock until midnight every day. I was thinking in terms of acronyms.”

The acronym explanation left open what Johnson knew about Aleppo before the MSNBC gaffe, so he went further.

“But regarding Aleppo, and what I have been saying for, I don’t know, six or seven weeks now, is that a key in solving the civil war in Syria is involving Russia,” he said. “The key to bringing this all together is Russia. And both Bill and I were reading about, you know, what’s in the works, how will this all work, well, how is this going to work when the Free Syrian army is so intertwined with our enemy, and yet they’re supposed to remarkably turn around now and we’re all going to be allied against the Islamists and [the Islamic State].”

Johnson said that even if the Islamic State is defeated, another Islamist group would likely replace it. “What does that say for inspired attacks that are occurring here in this country and other places? Look, we’ll be as vigilant about that as anyone else,” he said. “Bill has some ideas, which I think are good ideas, on how to address that.”

Johnson seemed equally out of his element in discussing Black Lives Matter and racial discrimination. “I watched the O.J. Simpson documentary several months ago. I had, I thought I was an informed human being. I had no idea, the prelude to the O.J. Simpson trial, and what was in fact, you know you hear it as background, and then you see it front and center, and oh my gosh, I didn’t realize this was happening, and by this was happening it’s still happening,” he said.

Johnson was on firmer ground when discussing illegal Mexican immigrants. “Everything [Donald] Trump is saying about the border is just incendiary,” he said. “They’re not taking jobs that U.S. citizens want. They are, statistically speaking, the cream of the crop when it comes to workers. They commit less crime than U.S. citizens. They are an absolute asset. Building a wall across the border: crazy.”

With no prior congressional experience, the Libertarians believe they know what makes it tick. “I know a lot of members of the House and Senate. Underneath it all, they don’t really want to be as poisonously partisan as they’re being,” said Weld. “If we get there, I think we will be less threatening to the members in general. We’re grownups. We’re not faint of heart. We’re happy warriors. But we wouldn’t be giving sanctimonious speeches.”

The Libertarians believe they can get Congress to agree to real budget cuts, rather than smaller spending increases. “Both of us came into governor after being in the private sector,” Weld said. “So we didn’t know there were any sacred cows in the budget.”

Their experience with state legislatures would be helpful, but Congress doesn’t treat novices very well.

Johnson needs to reach at least a 15 percent average in the polls to participate in the presidential debates, but has hovered around 10 percent. Adding a third debate participant might reduce the personal attacks between Trump and Hillary Clinton, but it would also reveal how little Johnson knows. Weld wouldn’t be on the podium to help him.

Voting for someone who isn’t qualified to be president solely to register your anger with the other candidates is a right protected by the Constitution. But I think it’s rather selfish when deciding the course of this country for everyone. Our responsibility as citizens should be to objectively consider who can actually do the job and vote accordingly.