SIU volleyball bounces back with sweep of SEMO 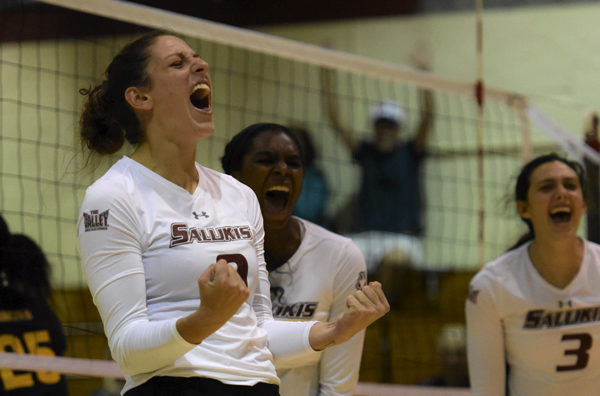 Senior outside hitter Andrea Estrada reacts after the Salukis score a point Tuesday, Sept. 6, 2016, during SIU's 3-0 win against Murray State in Davies Gym.

Coming off its first multi-loss weekend this season, SIU volleyball recovered in grand fashion on Tuesday.

The Dawgs defeated Southeast Missouri in straight sets for their fifth sweep on the year.

Estrada’s numbers served as a microcosm for the entire team’s effort, as the Salukis outshined SEMO (1-10) in almost all categories.

SEMO was kept at a distance in each of the sets as they failed to obtain a lead and fell behind by as many as 10 points in the first two frames.

Saluki junior outside hitter Abby Barrow tallied seven of her 11 kills in the first two sets.

Southeast Missouri responded well in the final set by slowing down the Saluki attack. SIU committed five attack errors in the set, allowing the Redhawks to stick around.

SEMO was within two points of taking the set before a 4-0 SIU run, capped by the Redhawks’ 20th attack error of the game, sealed the 25-23 set-and-match victory for SIU.

Junior outside hitter Nellie Fredriksson was a large part of the final run, scoring her ninth kill of the match and blocking two Redhawk attacks.

The victory was a short reprieve from the routine of weekend invitationals, which will resume 2:30 p.m. Friday as the Dawgs will take on Youngstown State in Dayton Invite in Dayton, Ohio.