Inside GOP, there’s some relief as Trump becomes better candidate 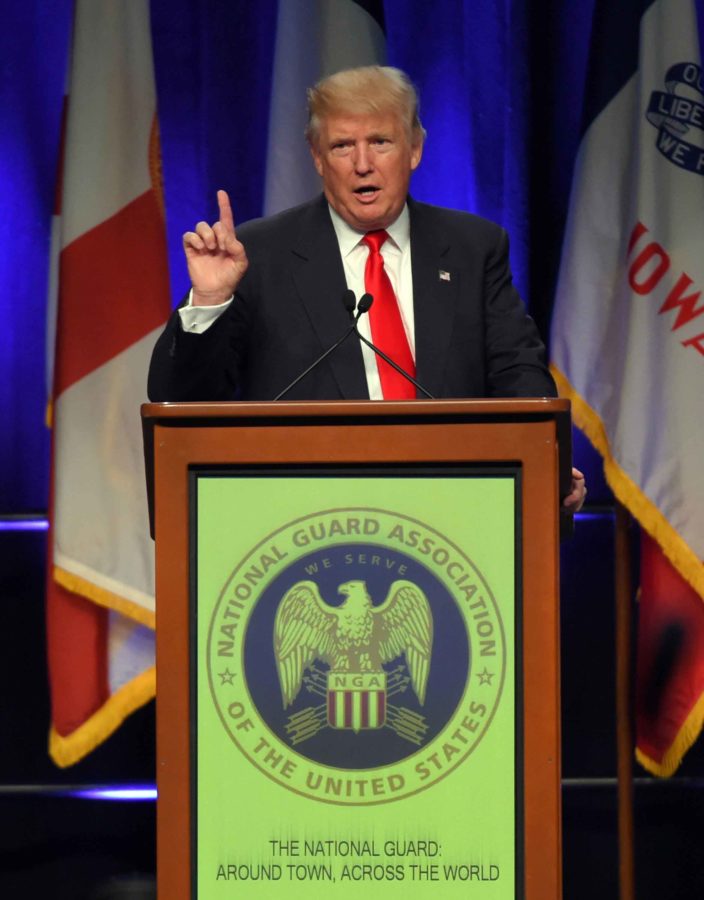 He’s making carefully worded speeches and issuing policy papers about the day’s top issues. He visited flood victims in Louisiana and traveled to Mexico to meet that country’s president. He’s staying on message, running an ad blasting Clinton for saying many of his backers belonged in a “basket of deplorables.” Monday, he was disciplined enough to say he hoped Clinton would recover from pneumonia, which represented both a notable shift from the harsh hints that something was gravely wrong with her health and a shrewd move to not get in the way of a story already hurting his rival.

“He’s not getting distracted,” said Robin Hayes, the chairman of the North Carolina Republican Party. “We seem to be doing without the ‘cleanup on Aisle 3 syndrome’ with him.”

Hayes noted the change in tone Monday as he was heading to a Trump rally in Asheville. On his car radio, he heard Trump discuss Clinton’s health Sunday with a simple, “I hope she gets well soon.”

It suggested a more measured, more disciplined Trump, a Trump acting more as a polished presidential candidate than the blunt entertainer unable to control what he said.

“It feels less and less like the campaign is being run off an iPhone,” said Kevin Madden, an adviser to 2012 GOP nominee Mitt Romney who this year opposes both Trump and Clinton.

He still refuses to release past tax returns, falsely suggesting that an Internal Revenue Service audit prevents him from releasing any. He still veers into dangerous rhetorical territory, such as his continuing praise for Russian President Vladimir Putin. He is, said Madden, “still not as disciplined as he needs to be.”

But many GOP officials are cautiously exhaling.

Jeff Kaufmann, the chairman of the Iowa Republican Party, said Trump seemed more able to focus on a single theme or topic at a time. And when there’s a need to get rough, he relies more on surrogates.

The turnabout is a surprise to many who backed other Republicans during the primary season.

“I didn’t expect he’d become as good a candidate as he’s become,” said Mark Meckler, who voted for Sen. Ted Cruz of Texas in the California primary. Meckler is the president of Citizens for Self-Governance, a nonprofit group that promotes grass-roots activism and individual responsibility.

The change has been most obvious since Trump hired Steve Bannon, a conservative media executive, and Kellyanne Conway, a veteran Republican pollster with GOP ties stretching back to the 1980s, to run his campaign in mid-August.

Conway said at the outset that she didn’t like insults — though she told ABC last month that Trump “doesn’t hurl personal insults” — and brought her media savvy to a campaign that needed to hone and focus its message.

Since then, Trump has delivered major speeches on school choice and immigration, speeches that were largely read from texts. He issued a policy paper on overhauling the Department of Veterans Affairs.

He made presidential-style visits to flood victims in Louisiana on Aug. 19 and met with President Enrique Pena Nieto in Mexico City on Aug. 31. He’s promising to release details from a recent physical when he appears Thursday on the “Dr. Oz Show,” according to Fox News.

The campaign has run two sharply focused ads, one in nine swing states that pledged to improve the economy for middle-class voters and another that began Monday and blasts Clinton for saying half of Trump’s supporters should be in a “basket of deplorables.” She later said she didn’t mean to say half.

The ad, running in the swing states of Florida, North Carolina, Ohio and Pennsylvania, charges Clinton with “viciously demonizing hardworking people like you.”

For weeks, he and his supporters had raised questions about Clinton’s health. Senior adviser Rudy Giuliani had said Clinton looked sick, and he advised people to watch Clinton videos and draw their own conclusions.

But after she took ill Sunday and revealed that she was suffering from pneumonia, Trump and his team were cordial about health and tried to keep the focus on the “deplorables” comment.

“So something is going on, but I just hope she gets well and gets back on the trail, and we’ll be seeing her at the debate,” Trump told “Fox and Friends.” His surrogates went on other shows and said much the same thing.

Of course, a reason Trump upset a field of governors and senators and won the GOP nomination is that people enjoyed his frank style. It was on display last week, when he told the NBC “Commander-in-Chief Forum” that Putin is “really very much of a leader. I mean, you can say, ‘Oh, isn’t that a terrible thing’ [but] the man has very strong control over a country.”

Kaufmann explained that Trump “basically said Putin is a leader. Leadership is not necessarily a negative or a positive,” The Iowa GOP chairman said. “I didn’t read that as a positive for Putin.”

The challenge for Trump is whether he can avoid the sort of bluntness that ignites social media and dominates a news cycle. His negatives remain high. As Madden put it, “there’s been a residual effect from this lack of discipline from the past.” His insults and demeaning remarks about Mexican immigrants, women, people with disabilities and others will reverberate in ads and media coverage, and he’ll undoubtedly be goaded about them in the upcoming debates.

Trump therefore remains on a steep, and still unpredictable, learning curve concerning how to be a thoughtful candidate.

“Presidential campaigns are as much about what you don’t say as what you do,” said Matt Moore, the South Carolina Republican chairman. “You have to have discipline, and Trump’s been doing that lately.”