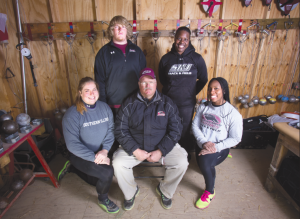 When it comes to SIU throws coach John Smith, curiosity did not kill the cat, it made the cat.

Smith found one of his father’s old shot puts in seventh grade and never looked back.

“If people just let me do what I do, I’ll do great things,” Smith said.

In 2005, he was hired as SIU’s throws coach. Smith has since coached athletes like Jeneva McCall, Brittany Riley, Gwen Berry and J.C. Lambert who combined for five NCAA Championships, 25 All-American awards and 26 Missouri Valley Conference Championships.

Freeman is now No. 1 for both indoor and outdoor shot put all-time, a record Smith held until last season.

Wideman—who is in the top-10 all-time at SIU for indoor shot put, weight throw, discus and hammer throw—said he is blessed to have a coach like Smith.

“[Smith] takes pride in the fact that I listen and trust the training,” he said. “I wouldn’t be where I am now, and I’d probably be trying to play football, if I didn’t trust in his training.”

Wideman was originally recruited as a football player, but Smith saw a track and field star, which Wideman said was hard to believe. With Smith’s tutelage, Wideman is an MVC Champion, six-time All-MVC thrower, honorable mention All-American, five-time NCAA Regional Qualifier and an NCAA National Qualifier.

“When I was throwing in high school, I was underrated and I didn’t think I was good enough to throw in college,” he said. “I shut my mouth and opened my ears and heard him.”

Saunders won the most recent throwing NCAA Championship for SIU with an indoor shot put title this year.

As the nation’s top throws recruit, Saunders reached out to Smith and the university, which surprised him because he never thought she would look at SIU. In her first indoor collegiate season, Saunders set the all-time indoor shot put record for SIU, broke the American Junior record and won the MVC Championship.

Saunders said if she chose Arizona State instead of SIU, she would have accomplished less.

“There’s a big and bright future here if this is just the beginning,” she said. “We’re still brand new to each other.”

Overall in his time at SIU, Smith has rerouted the women’s throwing program. Before him, SIU women had never won an NCAA Championship. Since his arrival, Smith’s women’s throwers have won six.

Coach Connie Price-Smith said there is still a bright future ahead for Smith and SIU throwing.

“It will continue to get better,” she said. “He’ll keep getting recruits in and develop them and continue to make champions.”

Smith said he originally got into track and field because of the politics of team sports.

“I gravitated towards throwing because the coach couldn’t sit you on the bench for someone that wasn’t very good,” he said. “I found out I could throw something far and no one could do anything about it.”

Smith said he chose SIU because of the athletes and coaching already in place.

Rob Roder, Smith’s coach from 1980 to 1981, was fired because of budget cuts during Smith’s sophomore year.

“We didn’t have much,” he said. “It’s not like it is now. We had two or three hammers, three or four discs and a couple shots. That’s what we threw.”

In his time at the university, Smith racked up eight MVC championships and is still No. 2 in indoor and outdoor shot put and No. 5 for discus all-time.

Smith said his favorite memory was being named an All-American for indoor shot put in 1984.

“The NCAA track meet is the third best event in the world behind the World Championships and Olympic games,” he said. “When you’re done, no one will remember you winning an event, it’s about how many conference titles you won and if you were an All-American. That’s what you’re remembered for in track.”

Smith’s first job out of college—as a Postgraduate Volunteer Assistant Coach and Strength and Conditioning assistant—opened the door to his coaching career.

Smith said growing up in Indiana, he hated Bobby Knight—longtime coach of the Indiana Hoosiers—but now he loves Knight because of his coaching style.

“He got to the point where he couldn’t coach anymore because the kids were not tough enough to be coached by Bobby Knight,” he said. “I try to choose kids that can do the work. If you can’t do my work, you won’t be good. I don’t look for talent anymore.”

In his first stint at SIU, Smith worked with Price-Smith and Rhonda McCausland, who became the first Saluki female All-American. Smith was responsible for Price-Smith changing her focus from basketball to throwing during her senior season. In 1985, Price-Smith won the indoor and outdoor MVC shot put titles and is still No. 6 in discus all-time at SIU.

Smith said he got lucky to have such great talent to begin coaching with.

“[Price-Smith] is the best all-around athlete I’ve coached,” he said. “I told people ‘this is as good as it gets.’ And I knew that.”

In 1986, Smith left his role at SIU to coach Price-Smith in her post-collegiate career and also work with high school throwers from home.

“There’s a method to his madness,” she said. “He knows how to get results and people buy into his coaching.”

In 1999, Smith was hired as Ohio State’s throws coach, where he would coach Dan Taylor.

“I would have to tell him to slow down in practice and then I would shake my head,” he said. “He missed the U.S. Olympic team [for shot put] by two inches the last time around.”

Smith said he would not consider going back to a school like Ohio State because SIU allows him to gamble on athletes and develop them. He said there is not a struggle to get everything you need at SIU, like his experience at Ohio State.

“Sometimes your work environment means everything,” he said. “You don’t have to fight people here. That’s why I enjoy it so much.”