University of Illinois leaders to get $175,000 in bonuses 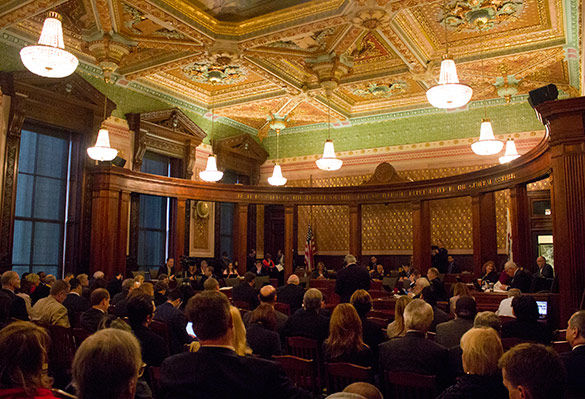 CHICAGO — University of Illinois trustees on Thursday approved $175,000 in performance bonuses for two of its top administrators, an amount that is part of their employment agreements but could rankle some during a time of financial uncertainty.

President Timothy Killeen will receive $100,000, while University of Illinois at Chicago Chancellor Michael Amiridis will get $75,000, the maximum amounts stipulated in their contracts. The bonus wages are based on their performance during their first year at the university.

“President Killeen’s leadership has been terrific, and this just reinforces how much we appreciate his leadership,” trustee Patrick Fitzgerald said. “At least from my perspective, he has earned every dollar of it. When you look at the leadership he has shown and each of the chancellors this year … we are headed in the right direction.”

In recent years, the university has moved away from retention bonuses for top administrators and instead to a system that emphasizes performance over longevity. Killeen has a base salary of $600,000, while Amiridis’ base salary is $400,000.

The potential to earn bonus wages was included in both their contracts when they took over last year. The bonuses are to be paid within 90 days.

The decision to award bonuses could face criticism as the university grapples with uncertain state funding and as state lawmakers have been scrutinizing the pay and perks provided to college and university presidents following several high-profile scandals in the state.

With that environment in mind, trustees last year eliminated other lucrative perks from the president’s and chancellor’s compensation packages. They removed a $225,000 retention bonus that Killeen, who took over in May 2015, would have received after five years in the job. Amiridis gave up a $50,000 annual housing allowance because he decided to live in a university-owned house.

In deciding to award Killeen the maximum bonus, trustees evaluated his performance in nine areas, including his leadership during the state fiscal crisis and increasing the enrollment of undergraduate students from Illinois.

Former U. of I. President Robert Easter was the first university leader to have performance bonuses included in his compensation package, beginning in 2013. He received three bonuses during his tenure, ranging from $90,000 to $180,000. Former UIC Chancellor Paula Allen-Meares was awarded a nearly $100,000 performance bonus before she left last year.