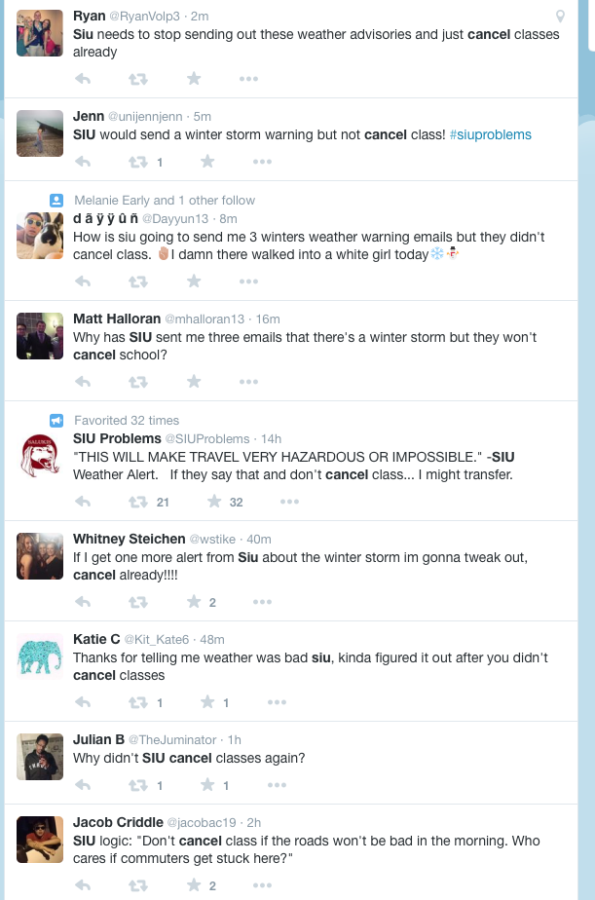 As snowfall increases and ice accumulation turns campus into a skating rink, the university canceled all classes beginning at 4 p.m. or later Wednesday, according to a university tweet.

President Randy Dunn said in hindsight, he would have cancelled classes earlier, but no decision has been made for Thursday’s classes. He said campus employees are working in waves to make sure the university can open for normal operations.

University officials will reconvene throughout the night, and a decision on campus closure could come as late as 4 a.m. Thursday, Dunn said.

According to an email to employees by Susan Ford, acting provost and vice chancellor for academic affairs, employees who choose to leave campus Wednesday should take personal days.

“Employees on late shifts would be expected to report to work or take personal leave,” she wrote. “All efforts should be made to try to keep offices open.”

Dunn reiterated this and said he expects staff to come to work unless there is an administrative closure, or they get clearance from a supervisor.

He said his main reason for not canceling classes was to use taxpayer money in the best manner.

“The determination to close campus is one of those things where you’re damned if you do and damned if you don’t,” Dunn said. “We’re supported by taxes and students’ and families’ tuition dollars, so we try to stay open for business as much as possible.”

As a superintendent of public school districts in Chester and Decatur, Dunn said he has had to make the call to close schools before. But he is not alone when deciding SIU’s fate.

The decision to close campus is made by Dunn; Matt Baughman, an assistant to Dunn; Kevin Bame, vice chancellor for administration and finance; Phil Gatton, director of Plant and Service operations; and Brad Dillard, a staffer under Gatton. The group also consults weather services, local law enforcement and state highway agencies to get update on road conditions.

He said classes were not canceled Wednesday because his staff did not feel getting to campus was a dangerous endeavor for most students. But as conditions worsened, his mind changed which led to the partial closure.

Dunn said he prefers a full closure of campus but Wednesday’s weather made roads hazardous.

“As the day went on, I did get much more concerned about employee travel,” he said. “We have a lot of students in the evening that come to campus and drive and that was a concern as well.”

If classes are not canceled Thursday, Dunn said professors have absence policies to allow for students to miss if traveling to campus is too risky.

“[Bad road conditions] would be a legitimate reason to have to miss class,” he said. “I had one email from a student whose father wasn’t going to let her drive to campus and she wondered what to do. I said, ‘You shouldn’t come to class.'”

He said students and faculty members should use their judgement and stay safe when deciding whether to come to campus.

Temperatures have dipped below freezing and an inch of snow has fallen, said Nick Hausen, a meteorologist at WSIL TV news station. He said a combination of freezing rain, sleet and snow has made traveling hazardous in Carbondale.

“Road conditions are pretty terrible,” he said. “Driving is not recommended.”

Hausen said freezing rain has led to the icy conditions while the sleet has provided a slick cover over the small ice accumulation.

At least two weather alerts have been sent from the university warning that travel is hazardous and nearly impossible.

Hausen said conditions on main roads will not improve until Thursday afternoon and some side streets will remain hazardous until Friday.

Morris Library, the Student Center and the Recreation Center will close at 9 p.m. Wednesday, according to a university tweet.

Tyler Davis can be reached at [email protected]

Luke Nozicka can be reached at [email protected]