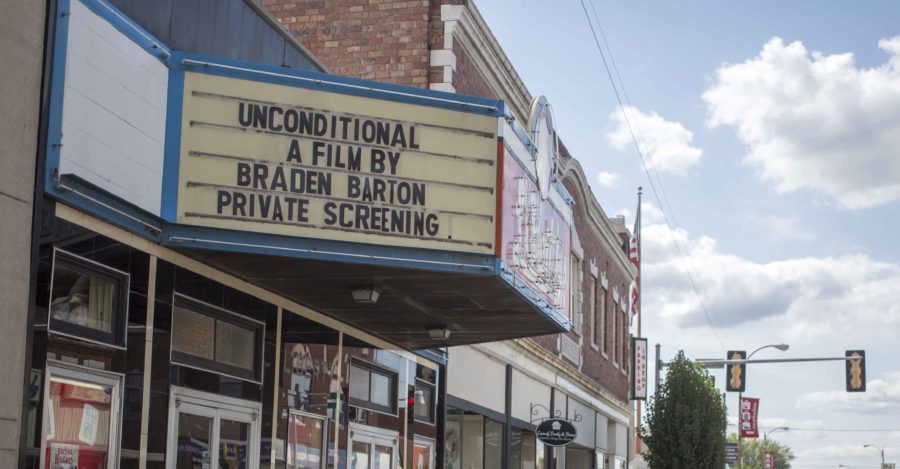 All it took was six months and 56 students to create a full-length feature film.

A group of SIU students and alumni held a private screening Saturday afternoon at the Liberty Theater in Murphysboro to show the feature film “Unconditional.”

Braden Barton, who wrote and directed the film before graduating in May with a bachelor’s degree in cinema and photography, recently moved to Los Angeles, where he works as a freelance filmmaker. But Barton, who was also the film’s cinematographer, made the trip back to southern Illinois for the screening.

Barton said the feature was originally supposed to be a short film for his senior thesis. But what started as 40 pages of script eventually became 124 pages, he said.

The cast and crew met for the first time in December.

Davide Tomei, a junior in cinema and photography who helped co-produce the film, said their team only had 20 days to actually shoot the film.

In those 20 days, about 60 percent of the film was shot during the first week and a half, he said. Some students worked straight through spring break to bring to life a story that evolved from a single scene Barton dreamt up.

Barton said that one scene inspired the whole film.

It began with an emotional father who started an altercation with a stranger. After provoking the stranger, the father was beat up. But instead of apologizing, the man laughed.

“I thought, how would I get a person to that point?” he said of the emotionally distressed character.

The story expanded from there into a murder mystery of sorts about Adam and Evelyn Ward, who are celebrating 15 years of marriage when Evelyn turns up dead, leaving Adam and their 16-year-old daughter behind.

Police leads get nowhere, so Adam takes matters into his own hands to find answers about his wife’s death, revealing her dual-lifestyle of sex, drugs and underground clubs — causing him to question everything they knew about Evelyn.

After the credits rolled, a number of wet eyes filled the historic theater.

During a question and answer session after the screening, the crew had plenty to say about the production experience.

One actor, Jeff Armstrong, expressed his love for the crew, calling them a family.

“Hands down, ladies and gentlemen, this is the best director I have worked with in my life,” Armstrong said of Barton.

The crew raised about $5,500 for the film, but individuals and local businesses donated props and sets.

Many crew members also said SIU was a big help.

More than 80 percent of the equipment and props used came from the university, with a lot of help from the theater department, Tomei said.

Barton said he learned everything he knows from the RSO, which gave him the hands on experience needed to succeed in filmmaking.

The film was co-produced Molly Esling and edited by Tyler Eversmann with Caiti Shannon as production designer and Peter Wilkerson as creative director. Matlyn Rybak was the lead actress in the film.

H.D. Motyl, an SIU professor in radio, television and digital media, was the film’s faculty adviser.

“Unconditional” is still being edited as the crew is working with a composer and producer to come up with original music for the film before sending it to different film festivals, starting with the Sundance Film Festival based out of Utah.

“I am a better artist for working on this film,” Tomei said.

Staff writer Simba Woodard can be reached at swoodard@dailyegyptian.com or on Twitter @simbawoodard_DE.