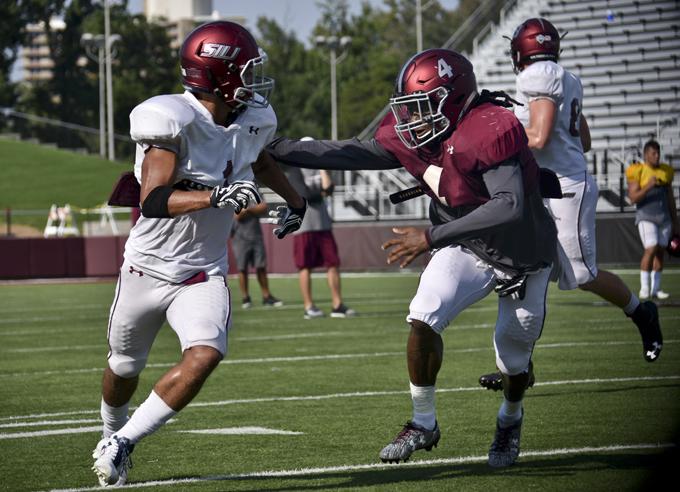 The Salukis lost 38-30 after allowing 17 straight points by the Owls in the second half.

Senior quarterback Josh Straughan, in his first Division I football game, completed 36 of 51 passes — 70.5 percent —  for 367 yards and a touchdown.

SIU’s offense was fast-paced, running 86 plays in the game. The Dawgs gained 530 yards of total offense.

Salukis started strong, finishing the first half with a 24-21 lead, thanks to a 69-yard touchdown from sophomore running back DaQuan Isom in the final seconds.

Isom led the team’s rushing attack with 80 yards and the touchdown on only five carries.

The third quarter marked a massive momentum shift, when FAU ran 29 plays for 160 yards compared to SIU’s 10 plays for 21 yards. The Owls scored 14 unanswered points in the quarter.

SIU’s final drive of the third quarter bled into the fourth, where the offense managed to drive 50 yards to get into field goal range. Senior kicker Austin Johnson’s 50-yard attempt was blocked and recovered by FAU.

The Dawgs finally got into scoring position again late in the fourth, when Straughan’s helmet came off and he was forced to the sideline, bringing sophomore Sam Straub in at quarterback.

Straub ran two plays, the second of which was his only pass attempt and went for a 20-yard touchdown to senior wide receiver Kyle Newquist after being deflected by FAU defenders.

SIU had a chance for a two-minute drill to tie the game up at the end, but senior running back Aaron Stanton fumbled on the first play of the drive. It was the only turnover of the game.

Stanton struggled to find room to run, gaining 24 yards on 12 carries. However, he helped out in the passing game, catching four passes for 62 yards.

Roman Tatum, a junior cornerback transfer from Delaware, broke his hand during a night where players were cramping up on both sidelines.

Senior wide receiver Billy Reed surpassed 1,000 receiving yards in his Saluki career, thanks to eight receptions for 69 yards and a touchdown.

Chase Allen, a senior linebacker, tallied 11 tackles in the game and now has more than 250 tackles in his career at SIU.