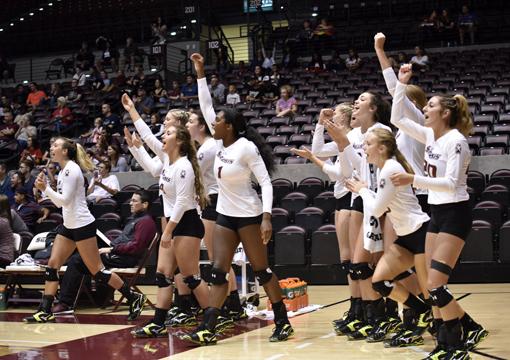 For the first time this season, Saluki volleyball faced some struggle to achieve a victory.

Hervey was a thorn in the Salukis’ sides the entire match, scoring a game-high 27.5 points while Wickey was not far behind with 14.5 points.

Estrada and Barrow served as SIU’s one-two punch throughout the match, scoring 22 and 21.5 points, respectively.

“We never had any doubt, we knew we had to beat them and we had really good energy,” Estrada said.

SIU held a dominant edge for most of the first set, converting on 48 percent of its attacks, while holding UCF to 12 percent. Estrada (five), Barrow (three) and junior middle hitter Alex Rosignol (four) had 12 of the Salukis’ 14 kills in the set.

Rosignol showed off her strong blocking strength with a team-high nine blocks in the match. The next closest player was Barrow with six.

SIU and UCF were neck and neck in almost every statistical category except blocking. The Salukis had 15 total blocks to UCF’s seven.

“Blocking is something that we can do at a pretty high level,” said assistant coach Dean Torgerson, who took over for coach Justin Ingram who left mid-game because of an illness. “Alex was a force at the net tonight, but UCF is a really aggressive team and they’re going to keep coming and you just have to stay with it.”

The Knights came back with a vengeance taking both the second and third sets by tuning up their defense. SIU converted just 18.6 and 7.5 percent of its attacks in the two sets, allowing UCF to take a two set to one lead.

In the fourth, UCF was within four points of victory before a 5-0 Saluki run put SIU ahead to ultimately force the final set. Barrow took control, scoring three of SIU’s final five kills in the set.

“This is our first home tournament and we had a great crowd.” Barrow said. “We wanted to get revenge for losing to them last year in five sets. It goes with our theme of unfinished business this year and we finished it tonight.”

The Dawgs never looked back in the fifth, opening as wide of a seven-point lead to put the Knights to rest as Barrow continued her hot streak, tallying six kills in the set. Estrada was as clutch in the final set, scoring four kills.

SIU volleyball will attempt to continue its undefeated run at 12 p.m. Saturday against Western Michigan and 7 p.m. against Northern Arizona at SIU Arena.