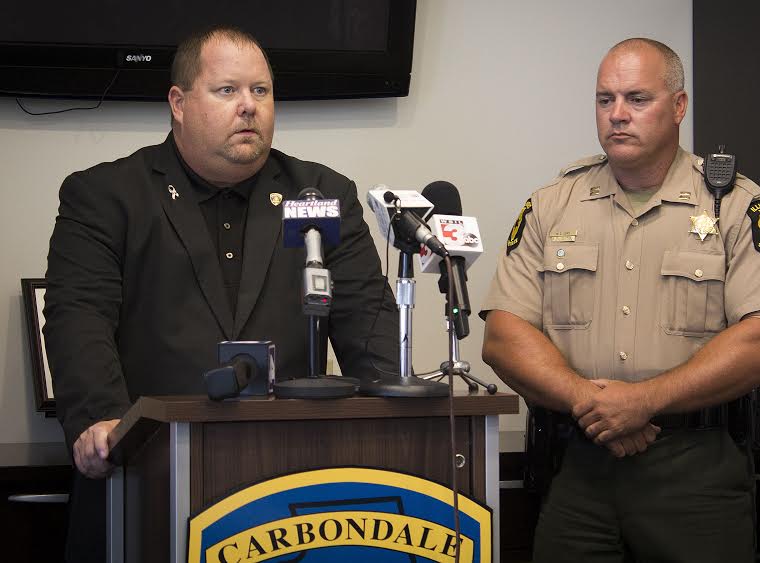 Carbondale Police Chief Jeff Grubbs and Sgt. Amber Ronketto unveiled the first draft of the ordinance to receive feedback from city council members and the public. The measure to enact new regulations spurred from a community forum in the spring that identified “chronic nuisance residences” as a top priority among those who attended.

“This isn’t an ordinance where we’re trying to regulate any old house party,” Grubbs said, adding that most of the parties in the city do not see a police presence and landlords generally work with the department to correct problems with tenants.

But there are a handful of landowners, he said, who allow tenants to violate laws with little regard for concerns of local law enforcement and the community.

Proposed is a three-strike system that would allow the police chief to declare a rental property as a “chronic nuisance house” after consultation with the city manager. It defines such a property as a dwelling where at least three unlawful activities specified in the ordinance occur “in, at or about the unit” during a one-year period. That definition widens to six offenses per year in residences classified as hotels and motels under the ordinance.

The unlawful activities outlined in the draft include public indecency, illegal parking, damage to property, obstructing traffic, loud music and reckless conduct.  Any felony or misdemeanor crime committed on or about the property could also be considered a strike.

In the coming weeks, the police department is set to meet with local landlords and SIU administrators to solidify a proposal for the council’s consideration, Grubbs said. The chief plans to involve student representatives from Undergraduate Student Government and Graduate and Professional Student Council for additional insight on how to allow students a college experience while creating a safer environment.

“We’re a university community,” Grubbs said. “This isn’t about killing the fun.”

Current police practices include issuing individual tickets to tenants for violations of city ordinances. Those lack teeth, Grubbs said, and the department has yet to have an ordinance that provides the opportunity to work directly alongside landlords.

First steps under the proposal would be to initiate contact with owners of problem properties and provide counsel. If no measures are taken by landlords to correct persistent problems, fines ranging from $750 to $1,500 would be imposed on landowners for subsequent offenses after strike three.

Ronketto, who helped create the first draft, said the department looked at data from other cities around the state that have put similar regulations in place.

A large population of transient renters comprise a majority of the city’s residents. Between 2010 and 2014, a mere 26 percent of homes were occupied by owners, according to data from the U.S. Census Bureau.

“Basically, we took the consideration that this is not going to affect a lot of residences, but given that we are over 70 percent non-owner occupied, we need to have some leverage to help abate these instances,” Ronketto said.

While several community members stood to support the proposal, some questioned the ordinance’s necessity, implementation, legality, ambiguity and whether it could be racially discriminatory. Skeptics also cited the broad scope of power the chief would have in declaring properties as chronic nuisance homes.

Jessica Lynn, a Carbondale resident, was one of those skeptics.

Lynn said the approach of creating the ordinance would push landlords to evict tenants hastily. She encouraged the council to explore alternatives that involve more community engagement instead of increased policing.

On the other end, Don Monty, a former city councilman and former mayor who serves on the city’s Liquor Control Advisory Board, said nuisance properties have a history of becoming crime problems in neighborhoods. He suggested a carefully written ordinance could be the “missing ingredient” in dealing with problem tenants.

In addition to considering the ordinance, Councilman Adam Loos proposed the idea of licensing landlords.

“If you’ve got a chainsaw and you want to take $20 from me to cut a branch off my tree, you have to have a license to do that,” he said. “You can’t cut a branch off a tree for pay without a license, and yet you can rent these properties to people — just go buy it, and open up shop. It’s crazy.”

Councilwoman Jessica Bradshaw said she initially thought the ordinance was a good idea, but hearing some comments from the audience made her uncertain. She said she would not support the ordinance in its current form and hoped another draft would be submitted for future discussion before bringing the matter to a vote.

“Looking at this ordinance now, I think it’s too subjective and I’m concerned about the rights of the tenants,” Bradshaw said.