Former Salukis could be first SIU teammates in NFL 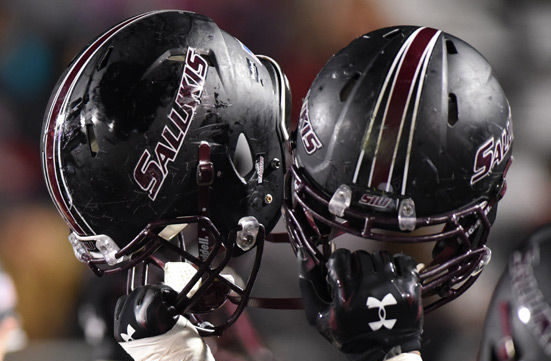 Saluki football players celebrate on the sidelines after their 38-31 overtime victory against Youngstown State University at the homecoming game Oct. 24, 2015, at Saluki Stadium. (Jacob Wiegand | @jawiegandphoto)

Former Saluki linebacker Jayson DiManche was claimed by the Detroit Lions on Tuesday after being waived by the Cincinnati Bengals.

Two Lions linebackers, Jon Bostic and Josh Bynes, are struggling with injuries. Bostic might even be put on the season-ending injured reserve list.

DiManche joins a fellow Saluki tight end Adam Fuehne on the Lions 75-man roster. If the two make the final cut, they will become the first Salukis to be teammates on an NFL regular season roster.

The two played against each other Aug. 18 while DiManche was still with the Bengals.

DiManche played in every game, mostly on special teams, as a rookie for the Bengals. He remained on the team for the 2014 season before getting cut last year.

DiManche then spent time on the Kansas City Chiefs’ and Cleveland Browns’ practice squads in 2015, before rejoining the Bengals in January.

Over his three-year career, DiManche has played in 28 games, making 28 combined tackles and forcing one fumble.

As a Saluki, DiManche recorded 145 tackles in three seasons, including 19 sacks. He received Second Team All-Missouri Valley Football Conference honors as a senior in 2012.

NFL teams are required to make their final cuts to bring the roster down to 53 players by 4 p.m. Saturday.