Tribes fight for the environment 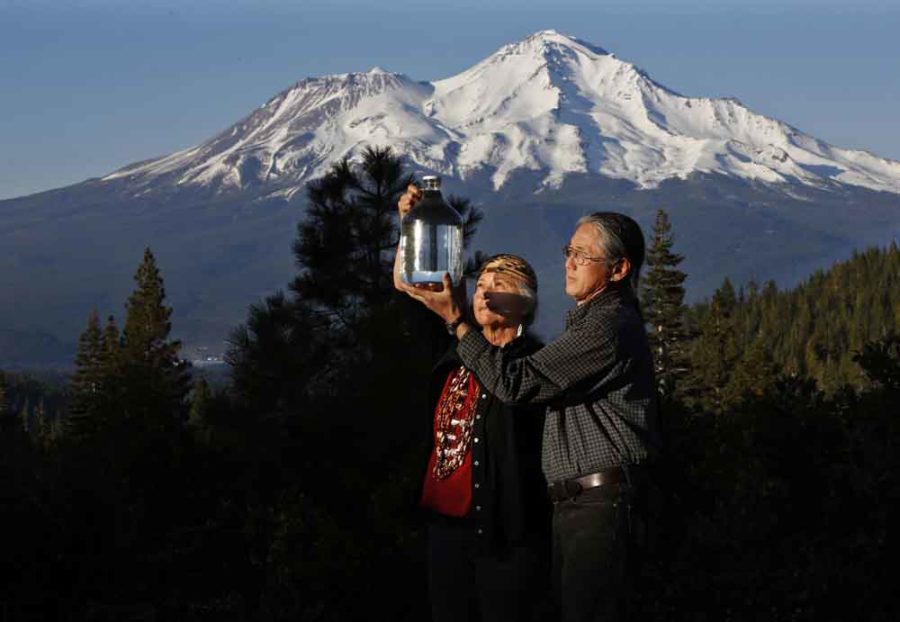 Luisa Navejas, 69, and her husband Mark Miyoshi, 64, hold a bottle of water from their home well on April 16, 2015 at the base of Mount Shasta, Calif. The members of the Winnemem Wintu tribe consider all sources of the pure drinking water to be sacred and the tribe has joined the fight against Crystal Geyser. Navejas said, "I understand the county wants to bring in business but you have to think about your future generations." (Don Bartletti/Los Angeles Times/TNS)

While American Indian tribes continue to be plagued with poverty and all the health and social ills it breeds, Indian country is now facing another threat: corporate invaders.

On the Standing Rock Sioux Reservation in North Dakota, tribal members have been protesting an under-construction $3.8 billion crude oil pipeline they argue would threaten contamination of their water supply and sacred lands.

A section of the Dakota Access pipeline, beginning in western North Dakota and stretching to Illinois, would be built under the Missouri River, which is the source of sustenance for the Standing Rock Sioux. Corporate officials argue the pipeline will generate jobs. Tribal members ask: At what price?

What is also disturbing to the Standing Rock tribe is that the oil corporation received its blessing to construct the pipeline from the U.S. government.

Of course, ever since the creation of the first American Indian reservation more than 250 years ago, tribes have been at the mercy of damning federal policies that have allowed for even more theft of Indian lands and exploitation of their natural resources.

The Standing Rock tribe is suing the U.S. Corps of Army Engineers for approving the pipeline because the oil giant did not fully and fairly consult with the tribe about its potential impact. That kind of procedure is based on treaties between tribes and the U.S. government.

Tired of the federal government’s lack of respect for Indian nationhood, tribes have started drawing a line when it comes to multinational corporations seeking profits at their expense. Indian country is fighting back.

The Bad River Lake Superior Band of Chippewa in northern Wisconsin and Alaskan Natives at Bristol Bay fought off what would have been two of the world’s largest open pit mines. And recently, the Rosebud Sioux of South Dakota helped defeat a congressionally backed pipeline.

And it is not just Standing Rock and other tribes standing tall. Non-native people from across the country, fed up with decades of environmental destruction, are joining the war against this pipeline.

Back home, community members of the Standing Rock tribe are committed to stopping this pipeline. As far as they are concerned, the price is too high. The risk of environmental disaster is too great, and protecting the health and welfare of their people is too important.