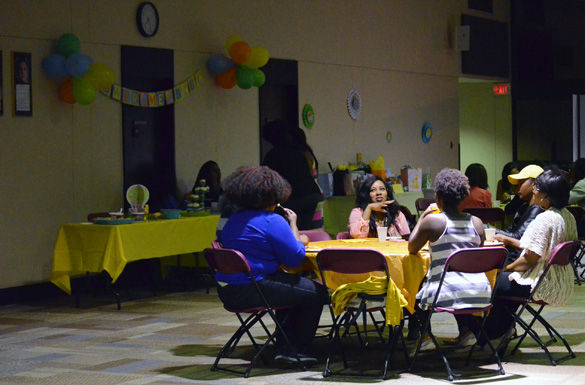 Giving birth is one of the hardest things for a woman to go through, and two students had their journeys made a bit easier.

The SIU chapter of the Zeta Phi Beta sorority hosted a baby shower for two pregnant students Sunday in the Alumni Lounge of the Recreation Center.

Chasity Jones, vice president of the sorority, said this is the third year of the event “Shower Me Blue,” which brought in diapers, wipes, lotions and toys.

“Expecting mothers in college are trying to balance school, work and having a baby, so if they have additional support, it’s easier for them to finish school,” Jones said.

All financial issues hit expecting mothers the most, Jones said. So she was excited to keep the event going and provide a little relief.

Aseedaw Deal, a clinical instructor with the rehabilitation department, said the shower goes along with the national Stork’s Nest Initiative for Zeta Phi Beta, which has supported needy, typically young mothers since 2010.

More than 20 women have been helped by the movement in the last five years, Deal said.

“We look for college-aged women to provide support because they are typically between 18 and 23 years old,” Deal said. “We want to show them that the community supports them.”

Brandy Dix and Ricki Gary, both moms-to-be, were helped by Zeta Phi Beta on Sunday. The women said they were thankful for the help, but wished the university were more understanding of their situation.

Gary, a senior from Chicago studying community health, said she has had several professors who would not adjust or accommodate the issues she had while pregnant.

“I had a professor say, ‘A pregnancy doesn’t stop anything,’ and if I’m sick, I need to bring crackers to class,” Gary said. “When I was late to class because I was waddling to get up stairs, she would ask why. Well, because I’m carrying 20 extra pounds.”

Gary, who also works a receptionist at Memorial Hospital of Carbondale, said she was surprised by the teacher’s reaction, but understood everyone has his or her own opinions.

Dix, a senior from La Vergne, Tenn., studying paralegal studies, said she had not had any faculty be as direct with her, but had many problems balancing everything during her first trimester, before she knew she was pregnant.

She said she was extremely exhausted and often sick, causing her to miss class frequently. Having to deal with the changing of her body and hormones, especially without any family around her, Dix said extra support means everything.

She managed to keep her grades up and began an internship with the Williamson County Public Defender’s Office this semester.

“We’re seniors and we’re doing this,” Dix said. “This was not going to stop us from anything. We are graduating with our degrees in May.”

Along with that, Dix is also the president of the Real Talk Registered Student Organization, which brings together students with different backgrounds to tell their experiences, and is a babysitter for the Illinois Department of Child and Family Services.

“Nothing stops,” she said. “You have to keep pushing through. We’re bringing life into the world. This is a miracle.”

Both women were determined to finish their degrees, even with the added challenge of having a baby.

Dix is expecting a baby girl named Lily in April, and Gary a baby boy in July named Kaiden.