US pediatricians pushing back on vaccine ‘hesitancy’ 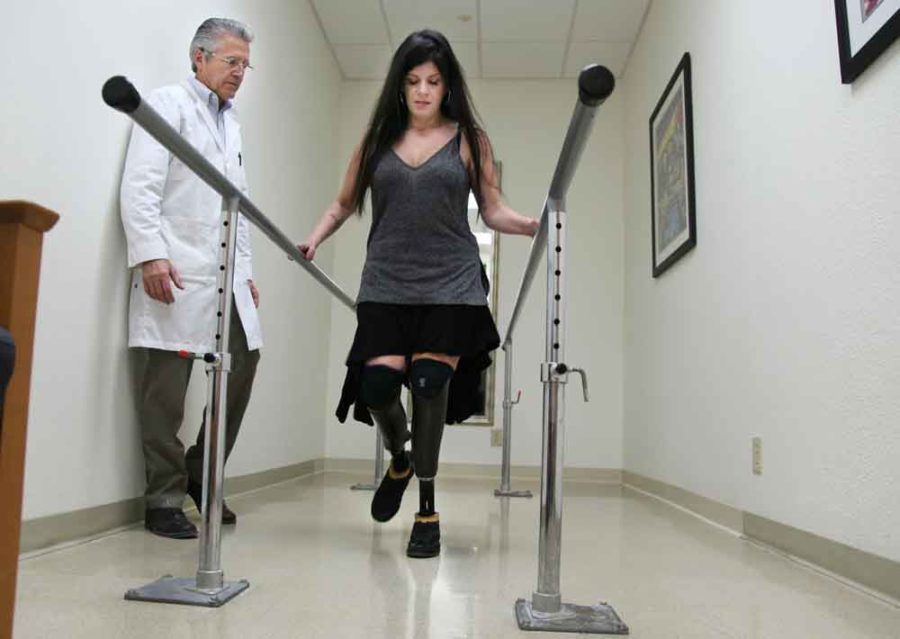 Kyla Winters nearly lost her life August 24, 2007 when she fell ill at a gathering with friends. At the hospital, all her systems went into failure. What followed, with the diagnosis of bacterial meningitis, was a series of operations, procedures, amputations and eventually a kidney transplant from her twin sister before she was able to leave the hospital. Over time she learned to walk with prosthetic legs and operate with incomplete fingers. She has become an advocate for organ donation and for getting meningitis vaccinations at all ages. (Peggy Peattie/San Diego Union-Tribune/TNS)

U.S. pediatricians are pushing back against parents who resist having their children vaccinated against a broad range of dangerous diseases by calling on states to stop offering waivers to those with non-medical objections to the practice.

In a policy statement issued Monday, the American Academy of Pediatrics also said that if parents continue to refuse vaccinations despite exhaustive efforts to change their minds, it would be acceptable for doctors to exclude these families from their practices.

The pronouncements are intended to guide U.S. pediatricians as they grapple with a rising tide of vaccine “hesitancy” on the part of parents. Among doctors who are members of the nation’s largest organization of pediatricians, 87 percent have been challenged in the last year by parents who refused to have their children immunized, up from 75 percent in 2006.

Imperturbable in the face of colicky babies, toddlers’ tantrums and teen angst, many pediatricians have reached the end of their patience with parents who are unconvinced of vaccines’ lifesaving benefits.

In 2013, 12 percent of pediatricians routinely asked parents to find another physician if they weren’t willing to vaccinate their children. In 2006, only 6 percent routinely showed such parents the door, according to surveys by the academy. That step should be a last resort, the group said.

In a lengthy report also released Monday by the academy, 23 specialists in pediatrics and infectious diseases said doctors should begin discussing the benefits of vaccines as early as the first prenatal visit. In doing so, they should be prepared to explain the scientific evidence supporting vaccines’ use.

The panel also urged pediatricians to “personalize” the message that vaccines are safe, effective and powerful by sharing their own decisions to vaccinate their children or grandchildren. This particular advice was prompted by studies showing that skeptical parents tend to value the safety and comfort of their own children over arguments emphasizing the role of vaccines in benefiting the public at large.

Even as it gave physicians its blessing to dismiss vaccine refusers from their practices, the pediatricians’ group acknowledged a widely held view among rank-and-file members: that for a profession dedicated to the well-being of children and their families, the decision to show patients the door is often difficult.

“It was gut-wrenching,” said Dr. Alison Ziari, chief of pediatrics at the Austin Regional Clinic, a multi-specialty practice with 70 pediatricians in Texas that adopted a vaccinate-or-leave policy in July 2015. “These are our families. We love them and we want to care for them.”

The survey results released Monday show that parents’ concerns about vaccines have shifted in recent years. In 2006, pediatricians reckoned that nearly three-fourths of parents reluctant to vaccinate their children were motivated by fear that some vaccines could cause autism or have other adverse effects on a child’s safety.

By 2013, safety concerns and the discredited link between vaccines and autism appeared to be less prominent causes of parental resistance. Instead, physicians attributed a growing number of parental objections to the view that vaccines are an unnecessary discomfort for their young children.

Such complacency is a common, if ironic, response to vaccines’ success, doctors and epidemiologists say. Before a measles vaccine was introduced in 1963, virtually everyone got measles as a child, and hundreds of Americans died of the disease each year. Today, few parents of young children have even seen it.

“In a way, immunization has been a victim of its own success,” said Dr. Sydney Spiesel, a pediatrician in Woodbridge, Conn., who has dismissed several families from his practice for refusing to vaccinate their children. “If you don’t see terrible things happening, you’re not seeing the risks” of failing to vaccinate.

The new guidelines follow a steady uptick in outbreaks of vaccine-preventable diseases, most notably measles and whooping cough. In 2015, a measles outbreak originating at Disneyland sickened 147 people in the United States, including 131 in California.

A study published in the Journal of the American Medical Association in March found that people who refused to vaccinate themselves or their children played a key role in initiating and accelerating those outbreaks.

Although all 50 states and the District of Columbia require that schoolchildren be immunized against a broad range of diseases, most states allow parents to opt out if they have a religious objection to vaccines and 18 allow for “philosophical exemptions” for those who object based on personal, moral or other grounds, according to the National Conference of State Legislatures.

“It’s clear that states with more lenient exemptions policies have lower immunization rates, and it’s these states where we have seen disease outbreaks occur as the rates slip below the threshold needed to maintain community immunity,” said Dr. Geoffrey R. Simon, lead author of the medical exemptions policy statement.