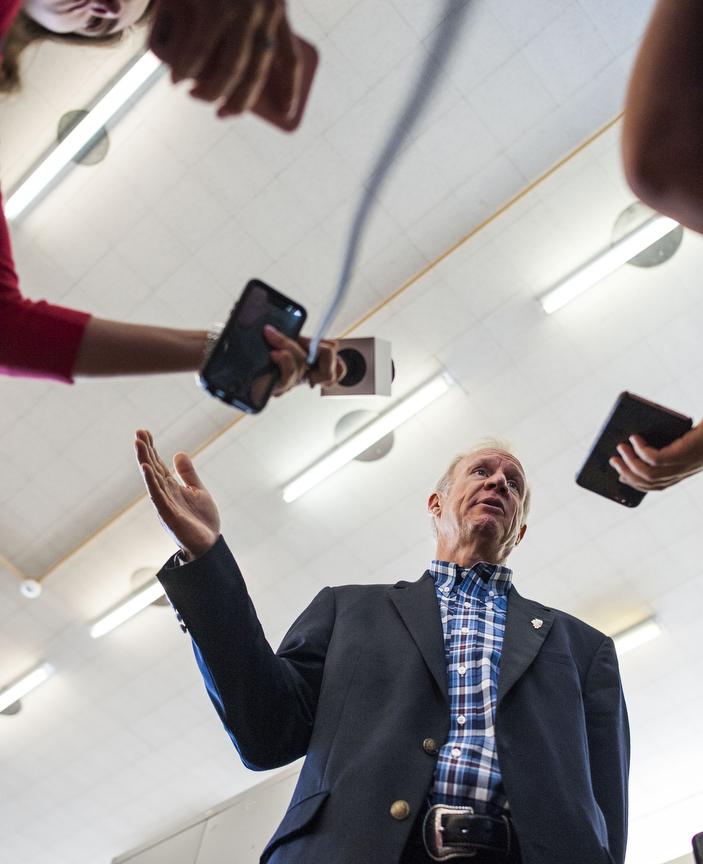 Gov. Bruce Rauner on Friday unsuccessfully waged a last-minute battle to block the Downstate and suburban teacher pension system from making a move that puts cash-strapped state government on the hook for hundreds of millions of dollars more in the short term.

At issue was whether the Illinois Teachers Retirement System board should lower expectations about how much the fund might earn in the stock market.

For the past two years, TRS has assumed that its investments will earn an average rate of return of 7.5 percent. But this time actuaries argued the figure should be lowered to 7 percent, given widespread belief that retirement funds won’t continue to perform as well as they have in recent years.

If the board voted for the 7 percent figure, state government would be on the hook to make up the difference, estimated to cost an extra $400 million to $500 million a year, an expense that would come due starting in July.

The governor and lawmakers would have to find that extra money, worsening a state budget that’s already in free fall amid a budget impasse that’s lasted more than a year.

If the board voted for the 7.5 percent figure, the state would not have had to pay all of that extra money right away. But if investments failed to hit the benchmark, the shortfall would have been tacked on to the pension fund’s $65 billion debt.

Taxpayers would be hit either way; the question was whether it would be in the short term or long term.

Rauner wanted TRS to delay the decision, an odd position for him to be in. Rauner has long criticized state and city government for kicking the can down the road on financial issues, and that’s what he was advocating as he tried to delay the teacher pension decision.

The chronic under-funding of the pension system pre-dates Rauner.

TRS was created in 1939, and in no year since then has the system received enough money from the state to keep it fully funded. A law that was passed in the 1990s ties the state’s contribution to a formula that is designed to get the system to a 90 percent funding level by 2045.

When the governor’s office learned that the change was afoot, his team mounted an effort to block it, firing off memos that warned of a secretive attempt by the TRS board to saddle taxpayers with a new, unaffordable expense.

As trustees prepared to consider the question Friday morning, Rauner attempted to stack the board with allies by appointing new trustees to fill three vacancies. Had that move been successful, Rauner may have had a majority of the votes on the board.

It’s made up of 13 members — six trustees appointed by the governor and six chosen by pension system members, and it is chaired by the state superintendent of schools, also an appointee of the governor.

But Rauner erred by attempting to fill one of those seats with a person who hailed from Chicago. State law requires that appointees reside in an area that is covered by the retirement system. Chicago teachers have their own pension system and aren’t covered by TRS.

Rauner’s staff said the erroneous appointment was the result of a “miscommunication” and withdrew it. As a result, just 12 trustees were seated for the Friday vote.

Ten voted in favor of lowering the expectations on returns, while Rauner’s two new appointees abstained.

Rauner spokesman Lance Trover blasted the decision as a blow to taxpayers, and questioned whether legal requirements to provide advance notice of such a meeting had been met.

“With less than two hours’ notice, Illinois taxpayers including our social service providers and small business owners were just handed a bill for nearly a half-billion dollars,” Trover said in a statement. “While questions remain about the legality of today’s action, it further underscores the need for real pension reform in Illinois.”

A wealthy private equity executive, candidate Rauner sold himself to voters as a businessman with the financial discipline to right Illinois’ ship.

That the first-term governor found himself on the other side of that message by resisting calls to better fund a historically shortchanged pension fund was an indication of Rauner’s continued struggle to grapple with the pressures of governing when they run up against his political promises.

Rauner on Thursday cast his opposition as a concern about transparency, saying the decision to put taxpayers on the hook for another massive payment should be considered carefully.

“What they shouldn’t do is rush this decision,” Rauner said when asked at an event in Decatur what he thought the trustees should do.

But his staff also expressed concerns about the amount of money that could be eaten up by the decision, pointing out in a memo that taxpayers spend less each year on support for six state universities combined. And the added bill comes as Rauner has been presiding over a stalemate at the Capitol that’s left state government continuing to spend beyond its means.

The extra money for TRS only worsens the growing pile of unpaid bills and the mounting state budget deficit. And every extra dollar digs the state deeper into the hole, adding pressure for a large tax increase and major spending cuts.

Still, even Rauner’s allies on the TRS board were convinced that the financially responsible move was to lower expectations and start sending more dollars to the pension fund. The vote came after an actuary chided the trustees for the state’s poor funding of its pension systems.

“When you’re paying a bill off, you want to at least make some progress toward paying the bill off,” said Kim Nicholl, an actuary with Segal Consulting, who lamented that in Illinois “your bill keeps getting bigger and bigger each year.”

“At some point, it starts to come down. But it would be like taking out a 30-year mortgage on your home and then not paying your mortgage payment so that at the end of the year you have to take out a bigger loan and then start paying it again,” Nicholl said.

Several board members balked at the actuary’s recommendations, which is also tied to projections of a lower rate of inflation. The resistant trustees said they wanted to explore the option of making no change at all, and wanted more information about the long-term consequences of that option.

Nicholl said she could crunch the numbers but warned that her firm would have to include a caveat.

“We’ll do the calculations for you, but in our certification letter we will say that that’s not our best estimate assumption,” Nicholl said.

The board then moved forward with the vote.