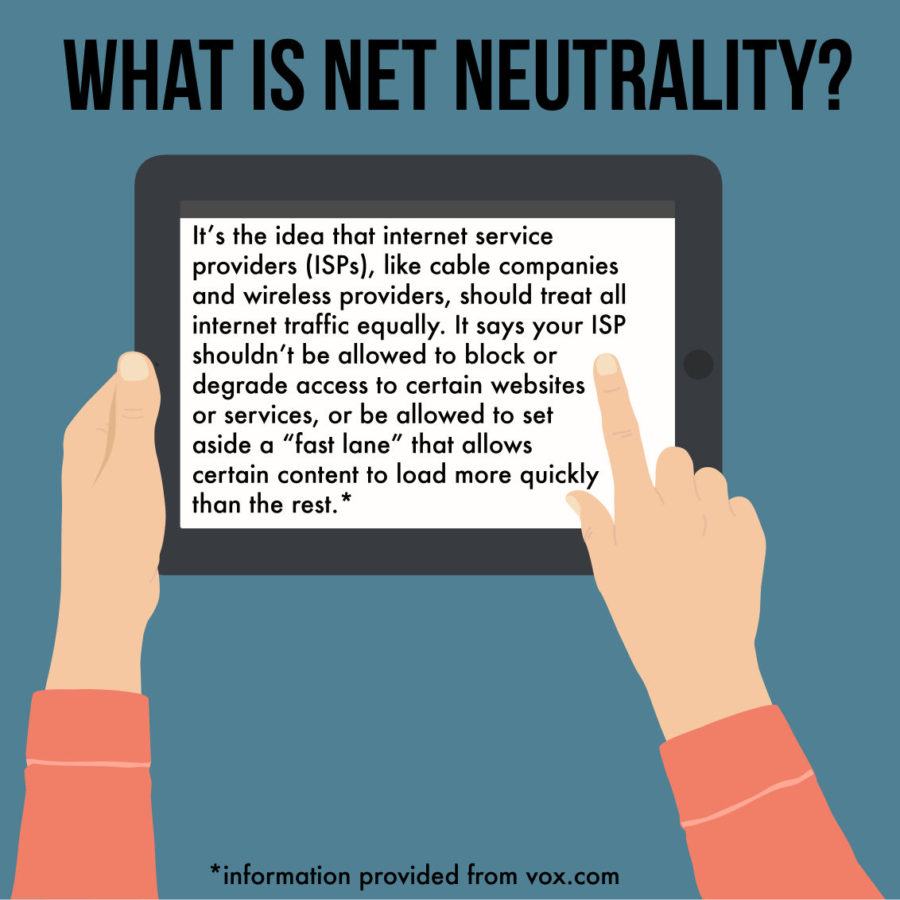 Students can rest assured knowing high-definition Netflix will be there to help them procrastinate on school work.

In a historic decision, the Federal Communications Commission voted 3-2 in favor of new net neutrality rules on Thursday. The rules prohibit websites from being blocked, similar to how phone companies cannot prevent a number from being called. Providers are not allowed to purposefully slow down the time it takes to reach a site, or create paid “fast lanes,” where content creators pay to have their product prioritized and delivered faster.

The vote comes a year after Netflix paid Comcast several million dollars to prevent the Internet service provider from slowing down its videos.

“The action that we take today is an irrefutable reflection of the principle that no one, whether government or corporate, should control free and open access to the internet,” said FCC chairman Tom Wheeler during the announcement.

Under the new rule, ISPs are classified as a telecommunications service, similar to telephones or radio, giving the FCC more power to regulate the corporations.

Woodward said one of the difficulties she experienced recently was explaining what net neutrality means. Being in the world of information technology, she said many students asked her whether it was a good thing and if they should be in favor of it.

During the summer comedian John Oliver did a segment on net neutrality for his show “Last Week Tonight.” The clip has had more than 8 million views and has been credited by some sites as a source for the rise in advocacy in the fall of 2014, where the FCC was contacted nearly 4 million times by people asking for net neutrality changes.

Woodward said once students found out Netflix, Facebook and YouTube were at stake, they woke up and spoke out.

“Ages 28 and younger, they feel entitled to having access,” she said. “They feel it’s an innate human right, and I agree. It is a human right to have the same level of access to education and to any other resource that others do.”

If not, she said, a society of haves and have-nots will continue to grow.

Woodward said the Internet is important in terms of education, but the economic side of the decision is equally as important.

For example, in the deal between Comcast and Netflix, the provider was allowed to interfere with online commerce. If Netflix paid to get uninhibited access to consumers, Comcast could prioritize Netflix over Hulu Plus and Amazon Prime.

Todd Ihle, an undergraduate assistant network engineer, said the only companies against the ruling are the providers, while several others such as Google and Microsoft, were aligned with consumers.

The old system was a form of double dipping, Ihle said. People paid their provider to have access to the Internet. Then, they paid a subscription fee to a service like Netflix, which gives some of that money to the provider.

“I should not, as a consumer, expect that a company would be held hostage for profit,” he said. “Especially by an Internet provider to give me a service I am already paying for.”

Ihle said this ruling, which allows true competition online, is best for consumers. Providers would have to compete based on the services they provide, not based on what sites they do and do not allow.

As good as the ruling is in theory, there are still some aspects of net neutrality members of the public still may be unaware of.

“I like the idea that [Internet] traffic can’t be messed with and allowed to get to its destination just as any other,” Imboden said. “It was always built for everything to be treated equally. If the classification comes at the expense of privacy from the government, or other trade-offs we don’t know yet, it might not end up being a good thing.”

Any time there is an increase of government activity, questions of privacy arise. After the National Security Agency leaks by Edward Snowden revealed the government’s monitoring of citizens’ Internet browsing, online privacy has become increasingly publicized.

Woodward said she has taken several students to Germany to talk about online privacy, and Europeans asked why Americans are not as interested in privacy. She said many people have become afraid of things like terrorism, so they want to feel safe.

Growing up in Germany, Woodward said Europeans are more active in defending their privacy, in lieu of security, because of how easily Adolf Hitler found all Jews.

“Do we need the government a lot more? It is what it is,” she asked. “Benjamin Franklin said ‘Those who surrender freedom for security will not have, nor do they deserve, either one.’”

She said she does not think the NSA has the man power to survey every single person, as many think.

Even with those concerns, there is still a possibility lawsuits will prolong the implementation of the rules.