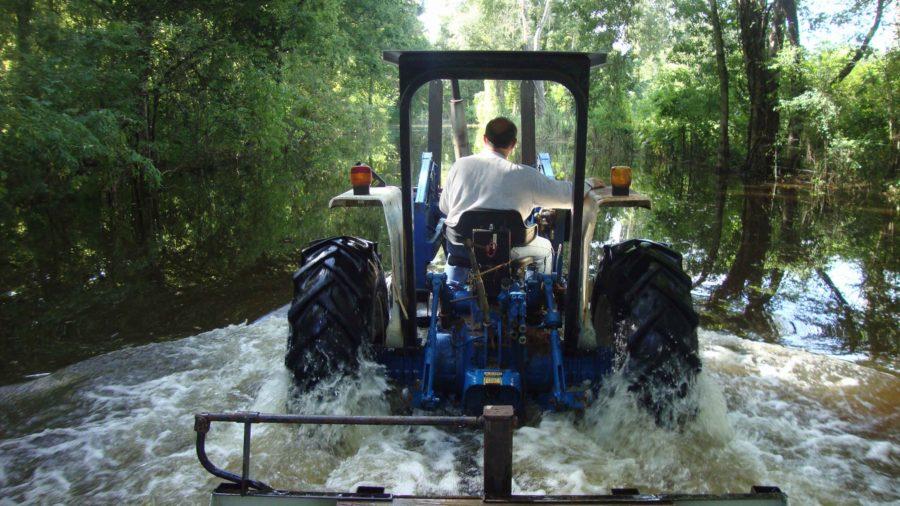 When Fran and Frank Cornwell first arrived in Hammond, La., last week, they had a truck full of food to deliver to flood victims but no set route.

So the retired couple drove around looking for soggy stacks of drywall, carpeting piled curbside and furniture waterlogged beyond recognition — likely signs of flood victims too busy gutting their homes to stop and take care of themselves in 90-degree heat.

“The people are plugging along. They don’t take time to eat or drink,” said Frank Cornwell, 72, of Fulton, Ill. “They’ve got to start all over again.”

Along with the Cornwells, 23 other Red Cross volunteers from the Chicago and northern Illinois area have been deployed to Louisiana, where floods have racked southern parts of the state since rainfall began Aug. 12.

Almost 2,000 volunteers represent about 98 percent of all of the flood relief efforts in Louisiana.

Thirteen people were killed and 30,000 were rescued, according to the office of Louisiana Gov. John Bel Edwards. More than 60,000 homes have been damaged and thousands remained in shelters.

Organizers on the ground say much more help is needed to deal with the damage left by what the Red Cross says is the worst natural disaster it has responded to since 2012’s Hurricane Sandy.

In all, national relief efforts alone could cost at least $30 million, but as of Thursday the Red Cross had received only $10.6 million in pledges and donations to fund shelters, damage assessment, mental health care, meals, water and other supplies.

“We don’t wait to get the funds and resources to respond in these cases: We’re there when we’re needed,” said Celena Roldan, CEO of the local Red Cross region. “We’re immediately on the ground … and then we partner with the American public and bank on their generosity.”

Roldan said the organization will be on the ground in Louisiana for the weeks and months of cleanup to come. She said the need for donations of time and money are only exacerbated by the fact that many of those affected by the disaster do not have flood insurance.

For the last week and a half, Charlie Sharp, of Sycamore, Ill., has been serving in a kitchen alongside other volunteers ages 21 through 75 who come from 20 states. A veteran Red Cross volunteer, Sharp said he was once again awed by the destruction flooding can wreak.

“When something like that happens, first reaction is disbelief,” Sharp said. “With floods it’s hit and miss: In one block you might get hit with 3 feet of water, and a block over is just a little higher ground. It’s hard to find where the affected people are.”

David Langenstrass, a retired mental health specialist from Elgin, has been traveling from shelter to shelter in Louisiana for 12 days to provide crisis counseling, short-term planning guidance and — more than anything, he said — emotional support.

“We just listen to their stories,” said Langenstrass, now in his eighth Red Cross deployment. “A lot of people just want to tell you what happened.”

His clients, for the most part, he said, are trying to cope with the loss of most of their possessions and the stress of figuring out how much of their houses are salvageable. Sometimes they need help figuring out how to register for assistance from the Federal Emergency Management Agency.

Other times he’s soothing victims who had to watch strangers take sledgehammers to their homes.

Between serving snacks and hot meals out of an emergency response vehicle, she said, part of her volunteer work has involved simply listening.

She recalled that one woman, in the middle of frantically preparing her home and calling her children, remembered to check in on some 90-year-old relatives. She found them helpless, watching the water rise foot by foot. Another man, a farmer, told Cornwell that this was the year he planned to retire.

Now, he told her, he’ll need to go back to work for some years.

“Most of the time they just need someone to tell their story to, and someone who cares. Every time they say it, it alleviates a bit of the anguish. It’s like going to therapy,” said Cornwell, who with her husband has been deployed with the Red Cross five times, including to New York after Hurricane Sandy. “It’s a joy in one respect and heartbreak in the other.”

Joe Dillett is flying home Sunday to Somonauk, Ill., after preparing and delivering 200 meals at a time in Clinton, La. Dillett, like many other volunteers nearing the end of their weekslong service, is urging Illinois residents to donate time or any amount of money to the Red Cross.

“We are short on volunteers,” Dillett said. “We only work off of donations. Without them, we couldn’t do our job here.”