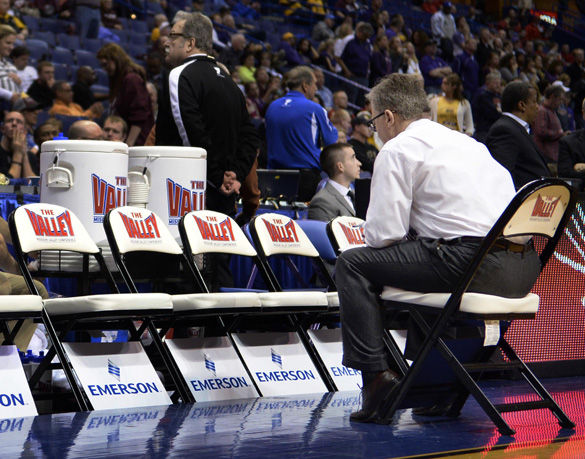 It is do or die time for the SIU men’s basketball team.

The Salukis (11-20, 4-14) enter the Missouri Valley Conference tournament as the ninth seed and play the Missouri State Bears (11-19, 5-13) in the opening round Thursday.

“They swept us, so it’s a unique challenge for us,” said coach Barry Hinson, who—according to a Freedom of Information Act request—will earn a $20,000 bonus if the Salukis win the conference tournament.

Hinson said the guards have to play extremely well for the Salukis to advance.

Missouri State coach Paul Lusk said there is always concern about SIU junior guard Anthony Beane, who was second in the MVC, averaging 16.5 points per game. He was named to the All-MVC Second-Team.

“It seems like he’s found his rhythm,” Lusk said. “When he gets it going there are not a whole lot of answers for him.”

All season, Hinson said he was searching for a human maturation microwave for the team. He said freshmen guard Deion Lavender and forward Jordan Caroline, who was named to the All-MVC All-Freshman Team, have grown up a lot this season.

Hinson said the biggest question is the mental maturity and the fatigue of younger players.

“Here in the Missouri Valley Conference, we’re happy for the success of those two teams and it’s on us other coaches and other programs to try and keep up with them,” Indiana State coach Greg Lansing said.

“It wasn’t a feeling of, ‘OK, we split with Wichita and we had a good regular season,’” UNI coach Ben Jacobson said. “There was a real genuine sense of disappointment.”

The tournament champions will get an automatic bid to the NCAA tournament.

“You have to battle and the winner advances and the loser doesn’t,” Drake coach Ray Giacoletti said. “Your season is done.”