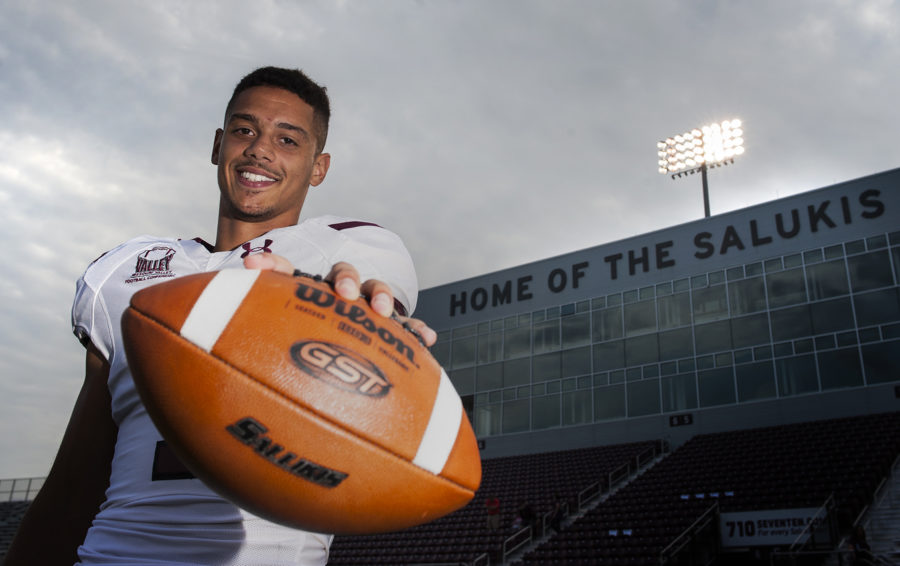 For “Izzy,” as his teammates call him, it was a long road just to get to this season. Even after an injury plagued his first five seasons, Lamprakes remains optimistic and jokes around with his teammates.

Lamprakes shares his number with a teammate, junior cornerback Craig James, claiming that the real No. 1 is all about locker position.

“In the locker room, the equipment is put in order by number — so one all the way down to 99 and then it starts at one again — and that’s where his stuff is,” Lamprakes said while munching on a popsicle. “So he’s down in the hundreds, which makes me the true No. 1, since I’m at the beginning.”

The locker room serves as the first step in Lamprakes’ mission to finish a season on top.

His freshman campaign ended when he tore his anterior cruciate ligament (ACL) and had reconstructive surgery. After spring camp in 2012, he had to have surgery on the same knee.

The injuries didn’t stop there.

In 2013, he battled consecutive hamstring strains along with a high ankle sprain, which carried over into the 2014 season. Then last year, he suffered a separated shoulder in a 34-31 loss to South Dakota.

He has yet to play through a full season completely healthy.

“After that last one I was like ‘Why me? Why does this keep happening?’” Lamprakes asked during a recent interview.

The timing couldn’t have gotten any worse for Lamprakes as he was in the middle of his most consistent season yet.

Before the injury, Lamprakes caught 31 passes for 481 yards, which ranked him fourth in both categories. His four touchdown catches had him tied for third with then-freshman running back Daquan Isom.

But after 19 weeks of waiting on an appeal, the NCAA granted him another year of eligibility this summer, which was all the motivation he needed to come back.

Lamprakes said he wasn’t sure if he’d get the sixth year of eligibility, but once he did, it was an excitement he’d never felt before.

Coming back for a sixth year wasn’t going to be easy, but coach Nick Hill was thrilled he decided to return.

“It’s really hard mentally for a guy to come back and do training camp for a sixth straight year and to not go through the motions,” Hill said. “For a guy like him to come back and put in the work, it’s really been a big boost for us.”

Lamprakes is just one of a few players who have been granted a sixth year — most notably former University of Houston quarterback Case Keenum, who was granted another year after he missed time because of injuries.

“You can never really replace experience,” he said. “It’s like having another coach out there on the football field. With Israel, he leads by example so the younger receivers watch him and they’re learning from him everyday at practice.”

Lamprakes said he’s ecstatic to get the chance to shine during his final year in what he hopes is a healthy and successful one.

“I’m just making sure to head to the trainer’s room if something is bothering me because our training staff is really good at keeping our players healthy and ready for game day,”  Lamprakes said. “This offseason was one of my most physically sound camps, so I’m really excited to make the most of this season. I knew if I got this sixth year back, I could make something special out of it and I’m just ready to compete.”

Lamprakes’ second go at a full senior season will begin against Florida Atlantic at 5 p.m. Sept. 3 in Boca Raton, Fla.

Ted Ward can be reached at [email protected] or @TedWard_DE.