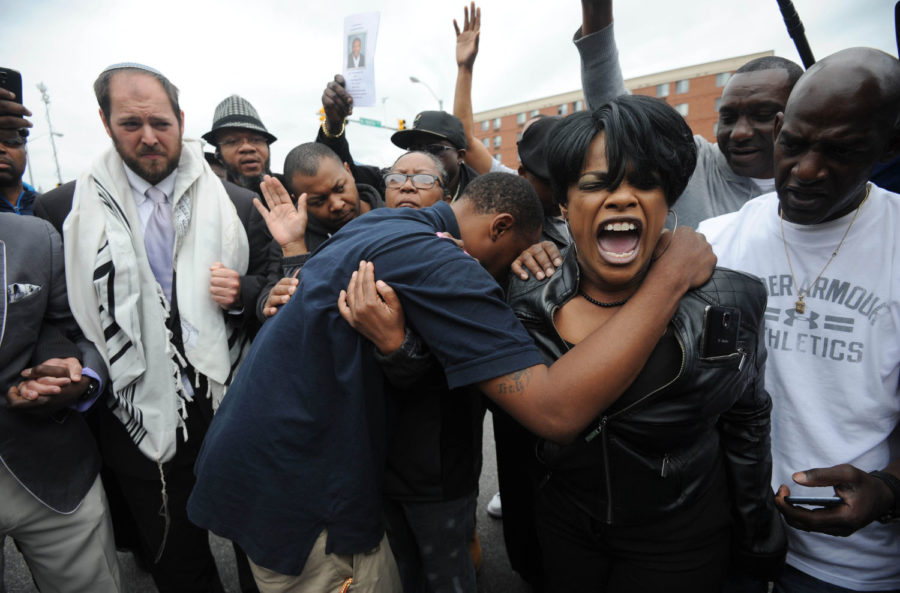 Rev. Pamela Coleman, right, prays with Baltimore residents at the corner of West North Avenue and Pennsylvania Avenue on May 1 after charges were filed against six Baltimore police officers in the death of Freddie Gray in Baltimore, Md. (Kim Hairston/Baltimore Sun/TNS)

By Luke Broadwater | The Baltimore Sun

BALTIMORE — Two more Baltimore police officers, cleared of charges in the death of Freddie Gray, are set to receive a combined $167,000 in back pay.

The city’s Board of Estimates on Wednesday is scheduled to authorize a payment of $96,855 to Officer Alicia White and $70,523 to Officer William Porter. White and Porter were cleared of manslaughter, misconduct and other charges on July 27, when Baltimore State’s Attorney Marilyn J. Mosby decided to drop the charges against them.

White and Porter were among four officers charged with felonies in connection with Gray’s arrest and death. They had been suspended without pay since May 1, 2015, under police department policy.

Having been acquitted, they are now entitled to back pay under that policy.

Earlier this month, the Board of Estimates, which is controlled by Mayor Stephanie Rawlings-Blake, authorized a payment of $126,916 to Lt. Brian Rice, the highest-ranking officer charged in Gray’s death. Last month, the city’s spending panel approved $87,705 in back pay for Officer Caesar Goodson Jr., the driver of the van in which Gray sustained his injuries.

Both Rice and Goodson were acquitted at trial by Circuit Judge Barry Williams, who found them not guilty of all charges.

Prosecutors alleged that the officers had caused Gray’s death by failing to secure him in a seat belt in the back of the van, but Williams disagreed that that failure rose to the level of a criminal act.

“The state has failed to meet its burden to show that the actions of the defendant rose above mere civil negligence,” Williams said in acquitting Rice.

He also noted the difference between criminal negligence and civil negligence, an apparent nod to the fact that the city previously negotiated a $6.4 million settlement with Gray’s family to avoid a civil trial.

Gray, 25, died April 19, 2015, one week after his arrest. His death sparked weeks of protests and activism against police brutality, and two nights of looting and rioting.

Visit The Baltimore Sun at www.baltimoresun.com