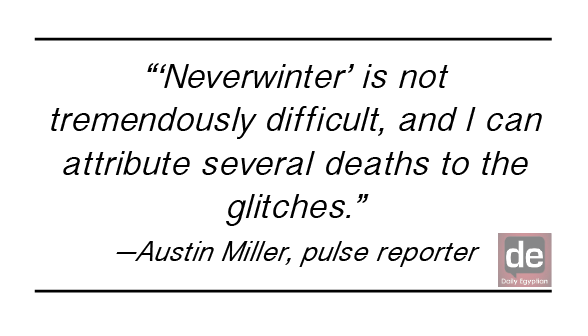 Albert Einstein defined insanity as doing the same thing over and over again expecting a different result.

“Neverwinter” is the video game industry’s latest attempt to put a massively multiplayer online roleplaying game onto consoles, which has not been done correctly before. All that means is the game is always online with hundreds of players controlling fantasy characters, like druids and warlocks.

“World of Warcraft” has been the gold standard of massive multiplayer online games, or MMOs, for more than 10 years and laughed every game that tried to dethrone it into obscurity.

While “Neverwinter” does not need to compete with “World of Warcraft,” it sure does try to clone it.

All of the menus prior to getting in the world are eerily similar. Then, once in the world, the on-screen commands are just as similar. Yes, there are only so few ways to tell someone to go kill some things, but there has to be a way to stand out.

The major way “Neverwinter” stands out from the broken console MMOs is in its controls.

These games have reigned supreme on computers because of how many keys are available, as well as high-powered computers having better hardware. Playing “World of Warcraft,” almost every key has some kind of binding to a command. L pulls up your quest log, M opens the map and B opens your backpack.

An Xbox controller does not have as many buttons to work with, but “Neverwinter” found a way to simplify it.

The triggers are your main attacks, with B, X and Y also controlling special abilities and inventories are tucked behind a start menu. There are fewer abilities than in “WoW,” but that does not become a bad thing because it plays so simply.

Combat is fun because players only have to focus on a few buttons, instead of multiple keys and combinations. In this case, simplicity equals fun.

Any newcomer to MMOs could boot up “Neverwinter” and get the hang of it. There is not a gigantic learning curve unlike some similar games.

The environment of the game is a lot better than I expected. Forests, mountains and cities all look exceptional. They are not the best I have seen, but better than most. Games like this require high-powered machinery to process the fine details, yet the Xbox One does a fine job of showcasing it.

However, there are tons of glitches, freezes and frame-rate drops. Some might blame the console, because this happens frequently in places with lots of players, but I also experienced it in empty forests, so I think it is an issue with the game itself. Had this been on Nintendo 64, you would have to blow on the cartridge every five minutes.

MMOs always have something going on, so to have constant freezes is not only inconvenient, but also an increase in your chances of dying. “Neverwinter” is not tremendously difficult, and I can attribute several deaths to the glitches.

These are also games defined by having massive amounts of people always online. There is a chat bar on the screen, which usually has people asking for help, looking for friends or trying to sell items. But I do not recall ever seeing anyone use it for “Neverwinter.” There is voice chat, but that feature seems to be dying in this generation, because many people just stay in parties with friends.

All “Neverwinter” had to do was try to be the best MMO on a console, and I would say it is. For some reason, the developers tried to get in the ring with a champion out of their weight class. A 135-pound bantamweight should not challenge at 235-pound heavyweight.

Just work on being the best in your division.

This shows how an MMO can be successful on a console. “Neverwinter” changed the formula enough to get a different result, insanity averted. I do look forward to a more original game usurping this one.