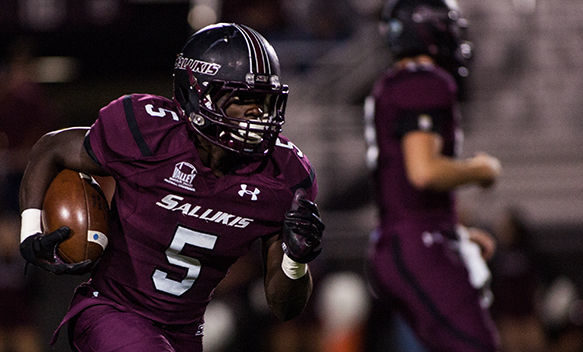 The season hasn’t even started and a Saluki football player is already a potential award winner.

Sophomore running back Daquan Isom was named Tuesday as one of 30 players on the Football Championship Subdivision Performer of The Year award watch list by the College Football Performer Awards.

Isom had a strong start to his career as a freshman in 2015, totaling 548 yards or seven yards per attempt. He also lead all freshmen the Missouri Valley Football Conference in scoring per game (5.3), rushing yards per game (60.9), all-purpose yards per game (158.2) and receptions per game (4.0).

Isom also led the conference in return average (23.4) and was second overall in all-purpose yards (1,424). He scored four touchdowns and was named to the All-MVFC Second Team and the MVFC All-Newcomer team.

Northern Arizona quarterback Case Cookus won last year, the sixth year in a row a quarterback has won the award, which has been given out to the most outstanding player in the FCS since 1978. Twenty-eight FCS Performer of The Year award winners have been first round NFL draft picks.

The 2016 FCS National Performer of the Year Award will be announced Jan. 11.