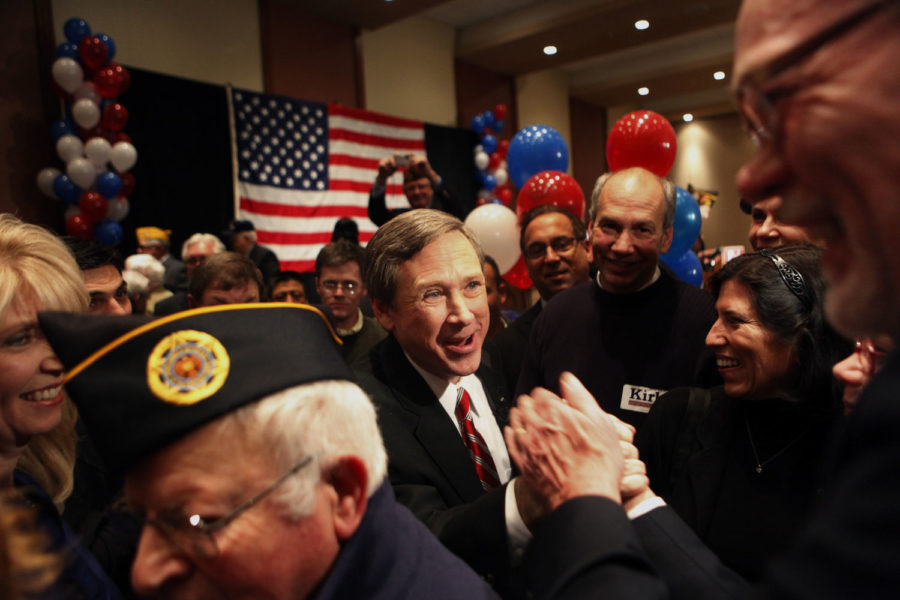 Republican U.S. Sen. Mark Kirk, who has made opposition to a U.S.-led nuclear agreement with Iran a major theme of his re-election campaign, likened home-state President Barack Obama to “drug dealer in chief” over a $400 million payment linked to the release of American prisoners.

Kirk’s controversial rhetoric has been an issue as the first-term senator is viewed as perhaps the most vulnerable Republican incumbent nationally this fall. He is being challenged by two-term Democratic U.S. Rep. Tammy Duckworth of Hoffman Estates.

The latest eyebrow-raising comment came as he spoke last week to a Downstate newspaper.

Kirk echoed GOP criticism that the U.S. cash payment of $400 million to Iran was a ransom for the release of American prisoners held by the country. The money was part of a previously announced settlement in a case stemming from money owed since 1979.

The U.S. has had a long-standing policy of not paying ransom for hostages, and the Obama administration described the payment as “leverage” for the release of U.S. prisoners.

“We can’t have the president of the United States acting like the drug dealer in chief,” Kirk said, “giving clean packs of money to a … state sponsor of terror. Those 500-euro notes will pop up across the Middle East. … We’re going to see problems in multiple (countries) because of that money given to them.”

Kirk’s comments, made to the editorial board of The State Journal-Register of Springfield on Tuesday, were first reported online on Saturday by the paper’s political columnist, Bernard Schoenburg.

The senator has made national security issues paramount in his bid for a second term — a campaign complicated by a controversial GOP presidential nominee and Illinois’ tradition of voting overwhelmingly Democratic in presidential years.

Kirk has unendorsed Republican presidential nominee Donald Trump and has gone through a back-and-forth series of statements of whom he would write in for president, settling on former U.S. Army Gen. David Petraeus, though the vote would not be counted under Illinois election law. Kirk’s comments are not the first time he has criticized Obama over the deal aimed at reducing Iran’s ability to produce a nuclear weapon.

Shortly after the multination agreement was announced in July of last year, Kirk contended Obama wants “to get nukes to Iran” and called the president “Barack Hussein Obama,” using the full name that conservative detractors often use.

Kirk later apologized for those remarks made to a Boston radio station, saying, “Actually (Obama) doesn’t want to get nukes.” Asked about those comments shortly after he made them, Kirk explained: “That was me being too carried away with, I’ve been pretty angry about the Iran deal.”

In the same interview with WRKO-AM, Kirk compared the nuclear agreement to British Prime Minister Neville Chamberlain’s appeasement of Germany’s Nazi Party under Adolf Hitler prior to World War II.

“This is the greatest appeasement since Chamberlain gave Czechoslovakia to Hitler,” Kirk said then. Obama “is doing this because of his very poor understanding of history and what happened to Neville Chamberlain.”

Kirk went on to contend the deal “condemns the next generation to cleaning up a nuclear war in the Persian Gulf.”

Kirk, who holds Obama’s former U.S. Senate seat, has made numerous controversial comments. He called Senate Republican colleague Lindsey Graham of South Carolina “a bro with no ho,” adding “that’s what we’d say on the South Side,” an allusion to Graham being single.

Kirk also suggested to the Peoria Journal Star last year that people drive faster through African-American neighborhoods out of fear of crime.

Kevin Artl, Kirk’s campaign manager, said the senator used the comparison of drug dealing because of the administration’s decision to send “pallets of cash, not even U.S. dollars, but euros and Swiss francs, in a clear ransom payment to Iran, the world’s leading state sponsor of terrorism.”

“The decision sets an awful and dangerous international standard that should be investigated and the lack of transparency from the administration clearly indicated they knew their actions were not above board,” Artl said in a statement.

“It’s no surprise Mark Kirk is embracing a conspiracy theory first articulated by Donald Trump — one that has already been debunked by numerous fact checkers,” McGrath said.

The White House did not respond to a request for comment Sunday.

Kirk’s latest flap came as Duckworth launched a new TV ad in which she recounts her oft-told story of growing up as her former Marine father lost his job and the family lived on food stamps.

“I know what it’s like to overcome tough times,” says Duckworth in the 30-second spot. “I will fight China’s unfair trade deals that take our jobs and I want to cut taxes for our middle-class families.”