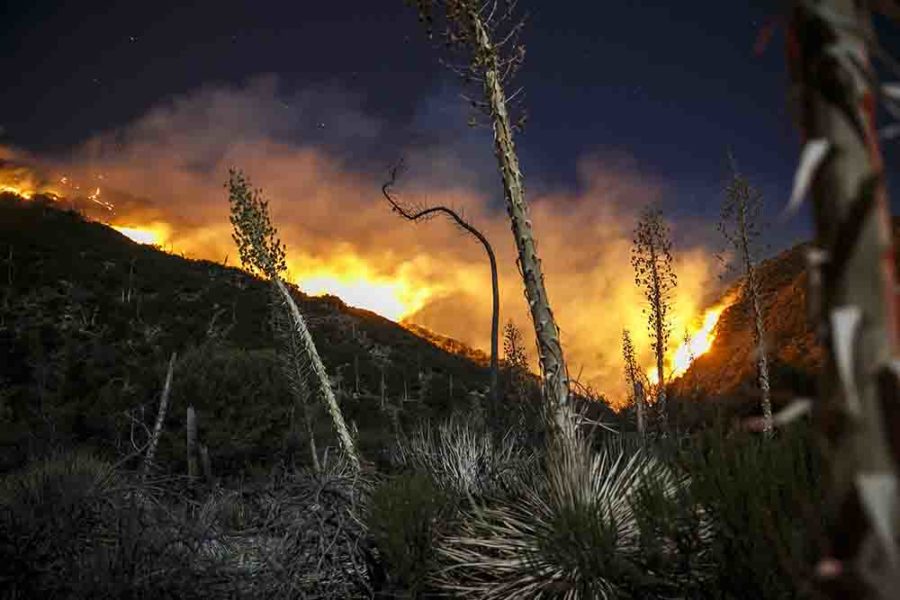 A half-century ago, hundreds of streams cascading down the San Gabriel, San Bernardino and San Jacinto mountains in California were packed with fist-size mountain yellow-legged frogs competing for mating rights.

Today, fewer than 400 of the endangered frogs are holed up in five hard-to-reach streams, all of them reduced to ribbons of shrinking ponds after five years of drought.

Now, as the third major wildfire in a month strips slopes overlooking the frogs’ habitats of vegetation, there is mounting concern that winter storms could inundate their last habitats with mud, debris and ash.

“I’ve never seen things this dry here before,” Adam Backlin, a U.S. Geological Survey biologist, said this past week as he surveyed the health of about 20 frogs in the upper reaches of the San Gabriel Mountains’ Big Rock Creek. “The last thing these frogs need is drought and wildfire.”

Wildfires are natural ecological phenomena, biologists say. Decades ago, when yellow-legged frogs and other rare aquatic species were widespread, they survived over time by recolonizing from neighboring populations.

Not anymore. Existing populations are descendants of a species pushed to the edge of extinction by urbanization, disease and the appetites of voracious nonnative predators including crayfish, bullfrogs and trout.

Small, isolated mountain yellow-legged frog populations were lost after the Old fire in 2003, the Station fire in 2009 and the Mountain fire in 2013, Backlin said.

This past week, the Blue Cut fire charred more than 37,000 acres on the range’s rugged northeastern canyon lands.

The big question now is whether it is too late to leave the unique Southern California frog’s fate to nature.

The species’ last hope may be swimming in carefully monitored aquariums at the Los Angeles Zoo and the San Diego Zoo, where genetic “insurance colonies” are being raised in collaboration with the U.S. Fish and Wildlife Service.

Three additional zoos may join the captive breeding effort later this year: the Henry Doorly Zoo in Omaha, Neb.; the Memphis Zoo in Memphis, Tenn.; and the Santa Ana Zoo.