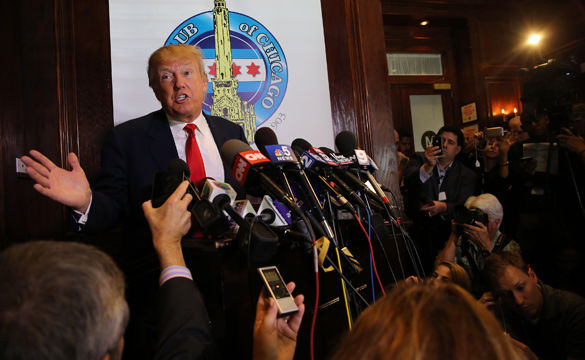 The resignation comes two days after Manafort lost much of his power in a leadership shakeup that included the introduction of a new chief operating officer and a campaign manager, filling roles that had been in Manafort’s hands.

“This morning Paul Manafort offered, and I accepted, his resignation from the campaign,” Trump said in a statement. “I am very appreciative for his great work in helping to get us where we are today, and in particular his work guiding us through the delegate and convention process. Paul is a true professional and I wish him the greatest success.”

Manafort had essentially taken control of Trump’s campaign in June, after a power struggle that led to the ouster of campaign manager Corey Lewandowski. But his efforts to rein in some of Trump’s most controversial tendencies were seen as a failure.

And Trump himself eventually lost confidence in Manafort, believing he was leaking information to the press, according to Barry Bennett, a former campaign senior adviser who continues to support Trump.

“He does not like to be leaked about. (Trump is) quite open to discussions, but he doesn’t like to read the staff thoughts in the paper,” Bennett said after Wednesday’s shakeup.

But Manafort also became a source of continuing controversy for the campaign in his own right.

Manafort’s consulting work for Yanukovych was already public. But the Times reported records of cash payments between 2007 to 2012 that were not previously disclosed.

It said the ledgers were discovered by a Ukrainian anticorruption bureau as “part of an illegal off-the-books system whose recipients also included election officials.”

One such transaction, the newspaper reported, involved an $18 million cable television deal put together by Manafort. The paper reported that Manafort is not the target of the probe.

“The suggestion that I accepted cash payments is unfounded, silly and nonsensical,” Manafort said in a statement Monday. “In addition, as the article points out hesitantly, every government official interviewed states I have done nothing wrong, and there is no evidence of ‘cash payments’ made to me by any official in Ukraine.”

Trump’s son Eric said in an interview to air on Fox News this weekend that his father wanted to avoid being “distracted by whatever things Paul was dealing with.”

Trump’s supportive comments of Russian President Vladimir Putin had already drawn criticism. Manafort also drew particular scrutiny after the GOP platform, approved last month, eliminated a call to arm Ukraine in its fight with Russia, which seized the Crimean Peninsula in 2014 and has supported separatists in eastern Ukraine.

The report said Manafort and Rick Gates, his deputy in his consulting work and on the Trump campaign, did not register as foreign agents, a requirement for those lobbying on behalf of foreign leaders or parties.

Hillary Clinton’s campaign rushed to assert that Manafort’s resignation would not end Trump’s admiration of Putin as a “strong leader.”

“Paul Manafort’s resignation is a clear admission that the disturbing connections between Donald Trump’s team and pro-Kremlin elements in Russia and Ukraine are untenable,” Clinton campaign manager Robby Mook said in a statement. “You can get rid of Manafort, but that doesn’t end the odd bromance Trump has with Putin.”