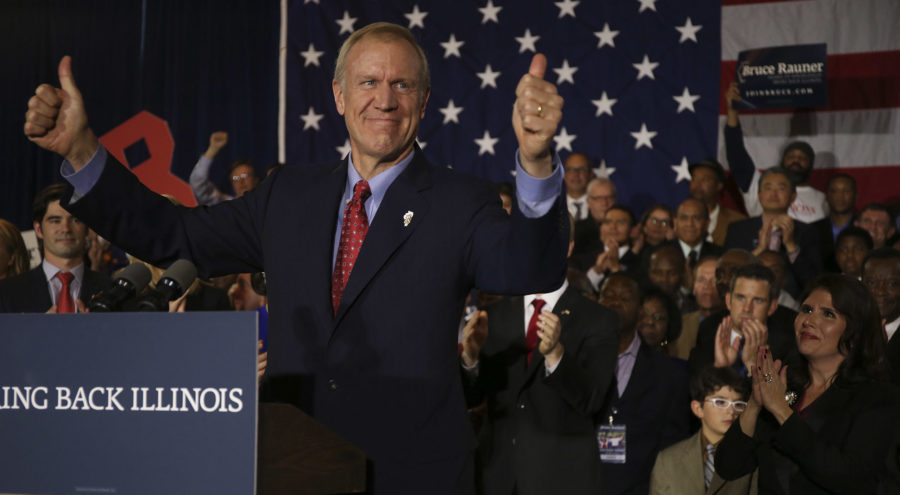 Illinois Republicans spent their day at the State Fair on Wednesday attempting to look past divisions over presidential nominee Donald Trump to focus on down-ballot races for the U.S. Senate, the House and key legislative contests aimed at eroding Democratic control of the General Assembly.

Gov. Bruce Rauner pledged to the party faithful that he would help lead a powerful ground game for contested seats in the state Senate and House, a chamber controlled by his chief nemesis, Speaker Michael Madigan, who also chairs the state Democrats.

But while other Republicans assailed Madigan by name, Rauner uncharacteristically didn’t mention him, instead referring to a “corrupt machine” that had seized control of Illinois and its democracy. It was apparently an attempt to broaden his political message to attack Democrats as representing the status quo and move beyond months of harsh criticism of Madigan that had advanced from a political and governmental dispute to personal animus.

“We’ve been taken over by a machine. A political machine that doesn’t care about people. It only cares about power. It only wants to take money from special interest groups and hold power, not serve the people. Hold power. That’s it. That’s all that machine cares about,” Rauner said of Democrats at a morning GOP breakfast.

Later, at the State Fairgrounds, Rauner continued his theme in another speech.

“That machine has taken over the city of Chicago. You look at the suffering there, the violence, the crime, the unemployment, the crumbling schools. That city is suffering because of that machine,” he said.

Rauner has used his personal wealth and that of his allies to pass funds through his campaign fund to Republican legislative campaigns taking on targeted Democrats in the Nov. 8 election.

Perhaps distracted by his focus on not mentioning Madigan by name, Rauner had a bit of a slip of the tongue as he finished his breakfast remarks. He thanked Republicans for their “patronage,” before quickly correcting himself to “patriotism, patriotism.”

Much of the Rauner effort has been to link Democrats to Madigan, the Southwest Side Democrat who has served as speaker for 31 of the last 33 years.

At the fair, Republicans distributed buttons pushing term limits — a major Rauner initiative though one that won’t be on the fall ballot — with the picture of a young Madigan, calling him a “career politician since 1971.” That’s the year Madigan arrived in the Illinois House after serving as a delegate to the convention that resulted in the 1970 Illinois Constitution.

Meanwhile, a large banner at the director’s lawn of the fairgrounds read “Fix Illinois.” That’s the nonbinding petition drive for term limits with ads featuring Rauner, which are paid for by the Turnaround Illinois political action committee that the governor created and helped fund.

While attacks on Madigan haven’t worked in the past, state House GOP Leader Jim Durkin, of Western Springs, said the difference this time will be the governor’s money.

“It’s either the governor and on the other side it’s organized labor,” he said of the campaign money race. “This is competition. We’re competing with them … It’s both green.”

But Durkin also acknowledged Trump, the GOP presidential nominee, might hurt in some legislative races, while perhaps helping in some rural Downstate contests. As for himself, Durkin said, “I’m not there yet” on voting for Trump.

And state Senate GOP Leader Christine Radogno said her ballot for president was “private,” though she said she wasn’t voting for Democratic presidential nominee Hillary Clinton.

Rather than urging help for his bid for a second term, Kirk spoke instead about Illinois’ history of inventions of everyday items ranging from cellphones to vacuums.

“When people from other states laugh at you ’cause you are from this state, remind them this iPhone here has roots in Illinois as deep as Abraham Lincoln and that’s the creativity of the state,” Kirk said.

During Kirk’s brief speech at the fairgrounds, a Trump supporter waved a sign festooned with the Republican presidential nominee’s name. Outside an earlier GOP breakfast at a downtown Springfield hotel, a pickup truck was filled with Trump yard signs for supporters to take.

But very few speakers mentioned the controversial presidential nominee, with Rauner once again refusing to respond to questions about Trump. That ran counter to party Chairman Schneider’s contention that Republicans were unified as he declared, “The Illinois Republican Party is standing by our candidates up and down the ticket, including Donald Trump.”

Comptroller Leslie Geissler Munger, seeking election to the office she was appointed to by Rauner following the pre-inauguration death of Judy Baar Topinka, noted her decision to put lawmaker and constitutional officer paychecks into the same queue of backlogged bills to vendors of state services.

Munger also announced a proposal to ban the pay of lawmakers and governors in cases where they have failed to achieve a balanced budget. But such a ban is unlikely to pass the General Assembly and also would appear to run counter to the state constitution.

Munger is being challenged by Chicago City Clerk Susana Mendoza, a former Democratic state lawmaker. Munger sought to link her opponent to Madigan while also contending Mendoza had “used the Chicago machine” to go from job to job.

But along with talk of the November election, there also was plenty of conversation of 2018, when the governor’s office is up for election.

One Democrat frequently mentioned as a potential Rauner challenger, U.S. Sen. Dick Durbin, sent out an email to supporters Wednesday asking them to protest Rauner’s recent veto of a bill to make voter registration automatic at driver’s license facilities.

Asked by reporters about a potential challenge from Durbin, Rauner laughed before saying the state’s senior senator is a part of the “machine.”