With each day, speculation about Milwaukee shooting video mounts 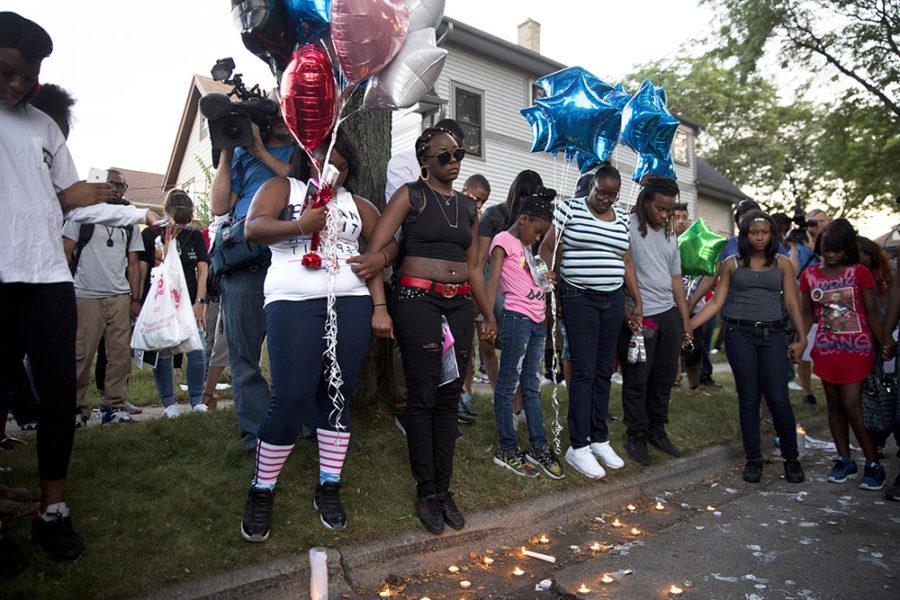 From center, Kimberly O'Neal, the sister of Sylville Smith, who was shot by the Milwaukee police the day before, stands with supporters during a vigil for her brother Sunday in Milwaukee, Wis. (Armando L. Sanchez/Chicago Tribune/TNS)

Four days after a police officer fatally shot an armed man, leading to a violent disturbance in Milwaukee’s Sherman Park neighborhood, the video captured by the officer’s body camera has not yet been released.

And there’s no indication it will be any time soon.

Law enforcement officials’ refusal to publicly release the footage is fueling speculation among residents and activists that it must not show what Police Chief Edward Flynn said it does: Sylville Smith, 23, turning toward officer Dominique Heaggan with a gun in his hand.

That speculation exemplifies the differing perspectives toward police, often determined by race, in Milwaukee.

“Because the video has not been released yet, there’s a belief that it’s going to show that this officer was wrong and they’re trying to alter this video somehow, some way,” said Shawn Moore, an activist who helped found the Safe Zones initiative, which works to interrupt violence in the city.

The body camera footage was turned over to the Wisconsin Department of Justice’s Division of Criminal Investigation, which is leading the probe into the fatal shooting at the request of Milwaukee police — and in compliance with a 2014 state law requiring outside investigation of officer-involved deaths.

Earlier this week, the state Justice Department released a statement saying officials there are “working expeditiously” to provide a “transparent view” of what took place, but was “not prepared to release any of the video evidence at this time.”

On Wednesday, the agency said it had no other updates.

A spokesman did not answer a question about whether Heaggan viewed the body camera footage before being interviewed.

Until the public sees footage proving Smith was pointing a gun at the officer, they won’t believe it, said community activist Tory Lowe.

Some black residents already are suspicious; Wauwatosa police have not publicly released the video of the fatal police shooting of Jay Anderson two months ago.

If the Smith footage “comes back and people find out they’re trying to twist it, it will create a huge problem between the streets and police,” Lowe said.

Others expressed frustration with Flynn and Mayor Tom Barrett for describing the video — Barrett said he saw only a still frame — without releasing it.

“Even without the body camera, the chief and the mayor did their press conference,” said Maria Hamilton, mother of Dontre Hamilton, who was shot and killed by a Milwaukee officer in 2014.

Chris Ahmuty, executive director of the American Civil Liberties Union of Wisconsin, also requested more transparency from the Justice Department, noting that Flynn “has already expressed conclusions drawn from a video the public has not been allowed to see.”

At that news conference on Sunday, Flynn said he believed the “modern record” for releasing such footage was set by Chicago police this month when they released video clips within a week of the fatal police shooting of an unarmed black teenager.

“Police departments in major cities across the country are aware of the delicate balance between what the community needs to know and our need to calm communities, or at least keep them informed, and also … the criminal justice process,” Flynn said.

The shooting unfolded rapidly and probably only took 20 to 25 seconds from the time the officer unbuckled his seat belt to the moment he fired his gun, Flynn said.

The video apparently doesn’t answer all the questions surrounding the incident.

“I can’t tell when the officer discharges his firearm because with many body-worn cameras — certainly all of ours — there’s a 30-second delay before the audio kicks on,” Flynn said on Sunday. “I don’t know when the shots were fired.”

The department’s Taser Axon Flex cameras run in “standby mode” and have a 30-second pre-buffer, meaning once an officer hits record, the previous 30 seconds of video become part of that recording — though those don’t have sound.

The department chose that brand after testing four manufacturers’ devices during a 2013 pilot program.

Milwaukee police officers do not use chest-mounted cameras, because officials here wanted a recording similar to an officer’s line of sight. Officers can wear the cameras by using clear glasses or sunglasses, a metal band under the shirt collar, a headphone-like band that wraps around the back of the head or a vest mount at shoulder level.

All of the video footage is stored off-site by Taser and, per department policy, any footage of a fatal police shooting or other critical incident is permanently retained.

According to the Milwaukee Fire and Police Commission, original video is always left intact as originally recorded. A “robust” tracking feature identifies in detail any copies made and who makes them.

An officer can face discipline up to termination for misuse of a body camera, based on the department’s Code of Conduct.