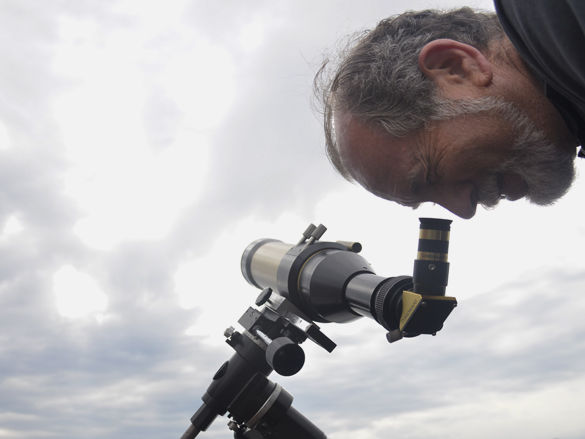 Harry Treece, of Carbondale, looks through a telescope Monday during the Transit of Mercury Public Astronomy Observation on the roof of Neckers Building. Treece, who previously worked in information technology at SIU, said he works closely with the physics department and the Astronomical Association of Southern Illinois to put on astronomy observations every month. "What's going on here is a transit of Mercury across the face of the sun," Treece said. "Mercury and Venus are the only two planets we can see between us and the sun because their orbits are closer to the sun than ours." He said Mercury can be seen in the morning and evening skies during most of the year. "I think some of the transits [when a planet passes between the Earth and sun] are the most exciting things I've seen so far." He said his interest in space started in grade school. "Looking at all the vastness in the night sky and all the beautiful things that are out there — nebulas, clusters of stars — it's just amazing," Treece said. — May 9, 2016, Carbondale, Ill. (Autumn Suyko | Daily Egyptian)

The upcoming solar eclipse is still a year away, but SIU officials are already looking skyward.

SIU will host an event Sunday evening to countdown a solar eclipse happening next year on the same date — the first of its kind visible from the United States since 1979, according to the university’s eclipse website, eclipse.siu.edu.

The viewing path of this eclipse will be at its strongest just south of Carbondale in 2017, giving SIU special interest in the astronomical event, according to the university’s news release.

The Sunday event, which is free and open to the public, begins 6 p.m. at the Student Center Auditorium.

Attendees can look forward to hearing from Saluki Astronomy Association president Sarah Kovac about the club’s first meeting and other information about how to get involved with the eclipse, according to SIU’s website.

There will be a 6 p.m. preview of  an eclipse webcast by NASA, followed by a 7 p.m. screening of “Chasing Shadows”, a documentary about people who follow eclipses around the world, according to a university flyer. A web interview with the producer of the documentary Nelson Quan will be broadcast after the showing at 8 p.m.

Participants also have the chance to sky-watch from 8:30 to 10 p.m. from the Neckers Building Observation Deck, where they are likely to catch a glimpse of Saturn and Mars, according to SIU’s news release.

Between 30,000 and 50,000 people are expected to visit Carbondale for the 2017 eclipse, so this event is designed to educate the general public on how to get involved and experience the eclipse to the fullest.

More information can be found at the university’s eclipse website, eclipse.siu.edu.

Additional information about the eclipse can be found at www.nationaleclipse.com.