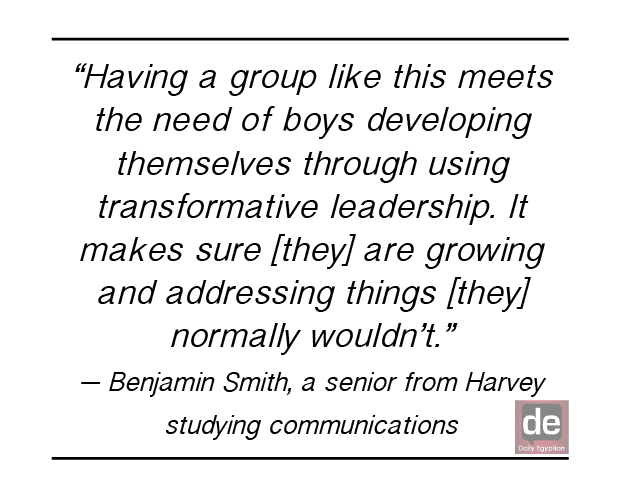 More than 85 percent of violent crimes in the United States are committed by men, according to the Bureau of Justice Statistics.

Boys Resisting Against Violence Everywhere (B.R.A.V.E.), a group founded here in February, thinks this data may be the result of hypermasculinity ingrained within popular culture.

Hypermasculinity, the group says, is the exaggeration of what is stereotypically a man’s role in society. This includes an overemphasis on strength, aggression, heightened-sexuality and stoical behavior.

“It’s rooted in the American DNA,” said Derrick Williams, Black Resource Center coordinator. “It’s as common as air.” Williams is the founder of Progressive Masculinity Mentors, the group after which B.R.A.V.E. is patterned.

Williams, who is also assistant director for the Center of Inclusive Excellence, said these gender-based restrictions are enforced heavily from birth to adulthood by media and the absence of healthy masculine representation for boys.

Benjamin Smith, a senior from Harvey studying communications, is making an effort to change the often violent and sexual way young men are pressured to express themselves.

Smith created B.R.A.V.E. to help male youth and teens focus on what it means to be a man.

“Having a group like this meets the need of boys developing themselves through using transformative leadership,” Smith said. “It makes sure [they] are growing and addressing things [they] normally wouldn’t.”

In a typical session, Smith and other mentors meet and talk with youth members about combatting gendered thinking.

“It’s about looking at how we can interfere with all that is being societally taught to them, and show them other avenues to being a man,” Adam McCallister, a volunteer for the organization said.

Smith’s idea for B.R.A.V.E. originated from his involvement in PMM.

Williams created PMM in 2007 to broach the issue of men not discussing masculinity and manhood, he said. It recognizes male privilege and uses an awareness of it to fight oppression rather than perpetuate it.

Members talk about a variety of topics, including sexual assault, consent, pornography, homophobia, violence and diminishing the hypermasculine caricature— particularly the image displayed by the media of being constantly in control and unable to express feelings.

Sometimes, these discussions are met with resistance or defensive behavior.

“Most people who have privilege don’t typically understand that they do,” Smith said. “Oppression becomes invisible.”

Boys seek approval from their peers, Williams said. They get their gender performance scripts from men, which is why it is important to teach them about the potential harm of hypermasculinity at a young age

“It’s about showing them it’s okay to show your feelings, to talk about things, to not always be the strongest person,” said McCallister, a rape crisis prevention educator at The Women’s Center.

Dismantling oppression is the ultimate goal, he said. Traditional gender binaries are not accurate anymore and should no longer be enforced upon the general public.

“It is really important that men join the movement along with other men,” Williams said. “Stand up and be advocates for change against gender violence.”

PMM meets at 7 p.m. in Lawson Hall every Thursday.

B.R.A.V.E. meets every Saturday morning in the Field Apartment Complex.

Jessica Brown can be reached at [email protected]