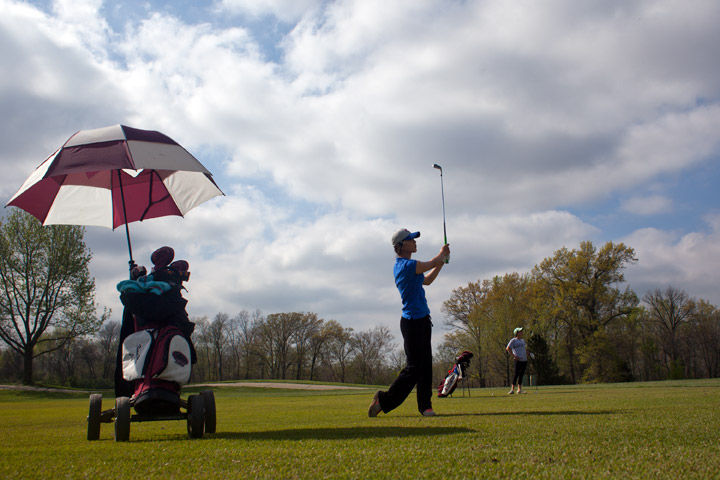 The Saluki women’s golf team placed third at the Missouri Valley Conference Championship, which was played from Sunday to Tuesday at the Spirit Hollow Golf Club in Burlington, Iowa.

Of the 10 teams that competed at the 6,024-yard, par-72 course, the Dawgs finished behind Wichita State and Missouri State, which scored 924 and 937 respectively. Wichita State won the tournament for the second consecutive year.

SIU’s team score of 948 was two strokes ahead of Illinois State’s 950.

The team was picked to finish sixth before the tournament. Women’s golf coach Alexis Mihelich said the team performed worse than expected leading up to the conference championship.

Mihelich said she is ecstatic with the team’s overall third place finish.

“I was going to really be happy with fourth or better, maybe top five,” she said.

“I knew we were better than Bradley and Indiana State, so I kind of figured, in my head, it would be between Wichita State, Missouri State, Illinois State and SIU,” Mihelich said.

She said those have been the teams in the last few years that have always finished in the top-four.

Mihelich said ISU played well on Tuesday and her team had to hang on to hold off the Redbirds.

She said it all came down to Cusumano, who birdied holes 16 and 18.

Cusumano was also named MVC All-Conference and was given the Elite-18 Academic Award because of her 4.0 grade point average.

Grimes ended her career at SIU scoring 239, placing 15th. She shot 74, 85 and 80 in the three rounds. She was the only golfer to get an eagle in the tournament.

“That was probably the highlight of round one,” Michelich said of Grimes’ eagle. “She hit a perfect driver and a perfect 3-hybrid to six feet and then made the putt [on a par five.].”

She said since it was on the last hole, it helped the team jump into second place.

Three golfers tied at 23rd place for the Salukis. Jin, Lindner and Netisingha all shot 243.

Going forward, Mihelich said the team has already started talking about next year’s conference championship, because of the number of seniors lost by the competition.

SIU only loses one senior in Grimes.

Mihelich said the number of upperclassmen Wichita State and Missouri State have led the teams to the top of the standings.

“You win championships with seniors and obviously with Missouri State and Wichita State with so many upperclassmen, they clearly had an advantage,” Mihelich said.

The team will not have organized practice until August, but players will compete in tournaments individually this summer.