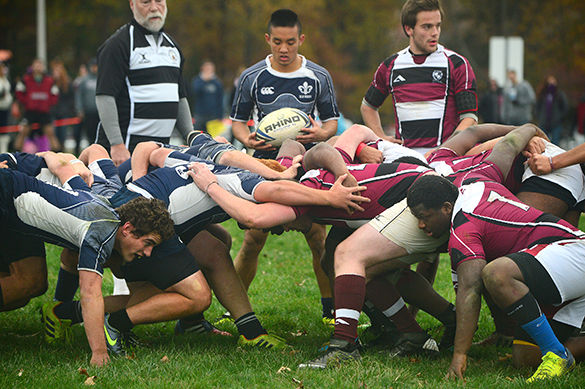 For the first time in its 44-year history, SIU’s men’s rugby club is heading to the Division II College 7s national championships, which takes place May 23 to 24 at the University of Denver.

The tournament features 48 teams, with three from the Gateway Conference, according to USA Rugby. Saint Louis University and Principia College are the other two conference teams that will join the Salukis at the tournament.

“We’re excited three teams from our conference are in, and we’re really looking forward to playing SLU and Principia,” said Ryan Flynn, a sophomore from Chicago studying public relations.

He said when he came to SIU from Spring Hill College, he did not think the club would be playing at this level, but now that they will be, he is excited about the chance.

“Not everyone gets to play for a national championship every day,” Flynn said. “We hope to put SIU rugby on the map.”

Pearce said it feels great to receive the bid and it will open opportunities, such as being invited to play in more tournaments out west or move up to a more competitive conference.

“We’ve been training pretty hard for this,” he said.

Ricardo Fernandez, a sophomore from Saint Charles studying business management, said he is new to the sport but fell in love with it right away.

He said on this team, the older players have helped the younger players. He also credits the club’s coach Robert Reyes for mentoring the players.

“A lot of our guys played in high school, so they’ve been taught by some really good coaches,” Fernandez said. “Whatever they know, they pass it off [to other less-experienced players.]”

Despite its existence for more than a century, Americans are unfamiliar with the sport, so they do not follow it, which Pearce believes is the reason for the club’s unlikely future as a recognized team sport at the university.

Instead of the full funding a school sponsored sport receives, the club only gets some financial help from SIU. It is not enough to cover all costs, so player dues are the primary source of funding.

Pearce said every member, 15 per roster, pays a minimum of $40 at the start of the school year. This fee is required by USA Rugby as insurance in case of injury.

An extra $60 per player is paid each semester for other fees, such as travel, hotel and equipment fees during the season.

SIU also assists by providing employees, who are trained in first aid, from the Recreation Center in order to handle minor injuries.

The club started a GoFundMe campaign to pay for travel expenses. Its goal is to raise $3,000. Pearce said as long as the monetary goal is reached, the players can manage the cost of food and other similar charges on their own.

Since the campaign’s inception on April 15, it has raised $740 from 16 donations.

Fernandez is happy about the progress made, because of family, friends and alumni who are helping the club financially.

“We’re excited to get our hands on a national championship,” Flynn said.