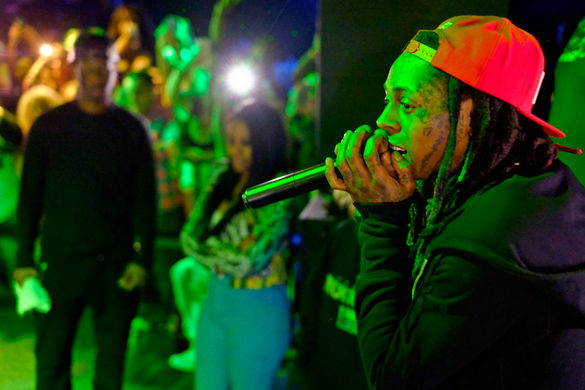 It was 1 a.m. Tuesday and the crowd was getting anxious at Levels nightclub as everyone was waiting for Young Money’s founder to walk through the side door.

While Lil Wayne did make an appearance, proving wrong numerous people who doubted the multi-millionaire would show, others who attended question whether they got their money’s worth.

Tickets for the event ranged from $50 for general admission to $100 for VIP, but only included about 15 minutes of performance, as the rapper entered the bar at roughly 1:15 a.m. and was back on his tour bus by 1:30 a.m.

Some concertgoers said they were disappointed by waiting to see Wayne for hours after his tour bus itself arrived at 10:15 p.m.

“Waiting for like three or four hours for him to show up for that like five seconds and then to get covered up by the audience was pretty [bad], because they paid that much money,” Riley Wyans, a concertgoer said.

Greg Knoob, owner and DJ at Levels, took to Facebook shortly after the performance to share his thoughts.

Knoob said Lil Wayne’s performance was amazing and his stage presence was something he had never seen before in his 30-year-long career, but the show was not what was contracted.

Wayne was contractually obligated to be in the building no later than midnight, but refused to get off the bus until an hour later, Knoob said

“We didn’t get what we were supposed to get,” he said. “It came down to the fact that [Wayne] refused to get off the bus because he wasn’t going to be allowed to smoke in the building.”

With April 20 being an unofficial worldwide celebration of marijuana and Wayne being an advocate of the plant, the police were aware of the possibility of its presence.

“I know they were here for [Wayne’s] safety as much as anything else, but that’s not what he saw,” he said.

In some states, marijuana is legal for recreational purposes, but in the state of Illinois, it is only medicinally legal with no state-licensed dispensaries in operation yet.

Wayne even made reference to the plant during his performance, talking about quitting smoking as a late April fools’ joke.

Although Wayne’s performance was short-lived, the night progressed with few problems or altercations in the crowd.

Mass anxiety was kicking in around 1:10 a.m. with no sign of Wayne in the building, but the only distinct altercation in the crowd occurred at 11:30 p.m. and was just verbal.

While some feel the performance did not live up to expectations, others see this as a positive night for the bar and just the beginning of more high-caliber performances in Carbondale.

“There is more to come,” said Cory King, a bouncer for Levels and Saluki Bar. “We put a new stage in, so we’ve had people come sing in Saluki Bar. We’ve had a couple good artists come in … and there’s going to be a lot more coming soon.”

Michael Blakemore, one of the event planners, felt the show was more than what the average person could expect when you see a name like Lil Wayne in Carbondale, he said.

“Just to have him do what he did, is a statement in itself,” Blakemore said. “It was a good night.”

Even though his time on stage was short, Wayne utilized every second with a high energy performance.

“The set that he did went straight to the point,” Blakemore said. “Once he hit that door, it was pandemonium.”

In the meantime, Knoob is trying to figure out a way to compensate concertgoers who paid for their tickets, he said.

“I’m going to get part of the money back, hopefully,” he said.  “It might take a while, but all that money is going back to the people that came, not to me.”

From what he saw, the majority of people were happy with the performance, he said.

“A $50 ticket, you’re never going to get anywhere near an artist that big, but this is still not what it was supposed to be,” he said.